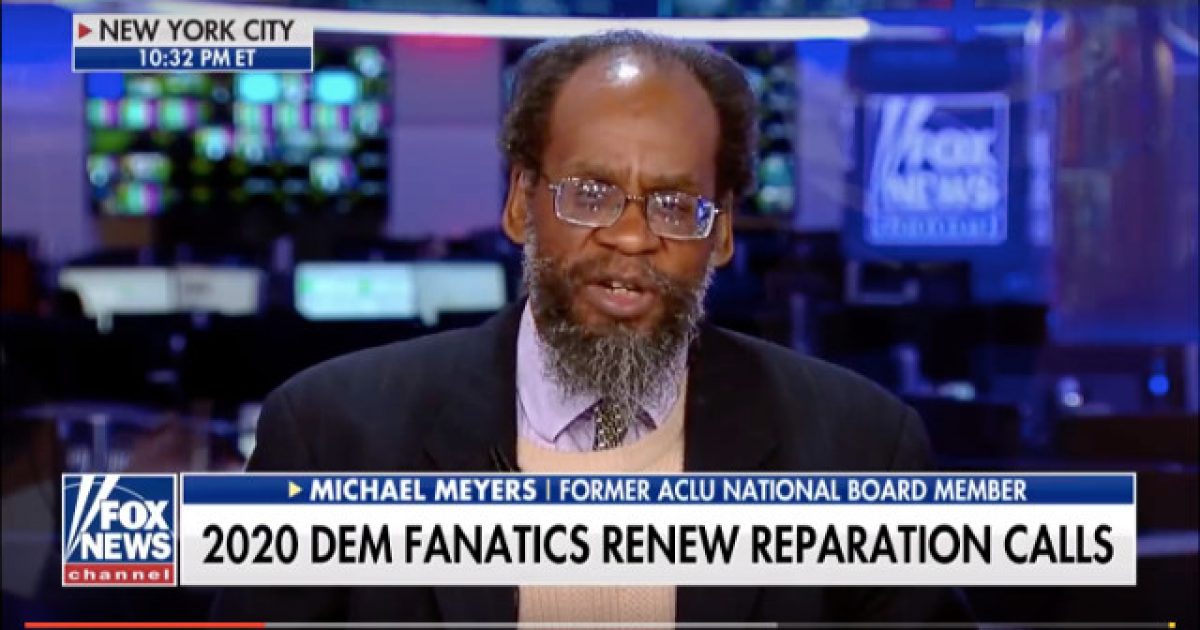 Michael Meyers, a former ACLU national board member, delivered a brutal shredding of “racial blowhard” Al Sharpton and continued to rip the Democratic Party a new one over their recent push for reparations calling it a “farce” during an appearance he made on “The Ingraham Angle” on Friday evening.

Folks like Sen. Elizabeth Warren, Sen. Kamala Harris, and everyone’s favorite Irishman Robert “Beto” O’Rourke have all been backing up Sharpton’s call for reparations for slavery, which prompted Meyers to issue his response.

“It’s more of that blame whitey movement mania, madness,” the former ACLU leader told host Laura Ingraham, The Blaze reports. “And it’s sheer racial rhetoric, and that’s what you get at the Al Sharpton so-called ‘house of justice.’ You have befoolery, and you have diversion, you have distraction. You have this notion of farce.”

“So at that house of so-called ‘justice’ you have either a horror picture show showing, or you have a farce. Either way it is not to be taken seriously,” he added.

Reparations is an “unintelligent” concept, Meyers said, arguing that any such collection from white people would just “go to people who are hustlers, who are pimps” — another apparent shot at Sharpton. “And I resent it, and I think it’s shameless, and I think it’s racial idiocy,” he said. “And people who have sense, who are intelligent need to address this as such.”

Meyers wasn’t done there. Nope, he still had more ammunition in the barrel so to speak and he let it fly.

He went on to say that if Democrats want to be taken seriously they’ll need to tell Sharpton no.

The problem with reparations is that you’re holding an entire modern generation accountable for the actions of their ancestors, actions which had nothing to do with them. Why should those who are not guilty be held guilty for things they had no part in? That’s not fair.

How would that heal racial division in our nation? It wouldn’t. It would reignite a lot of hatred that has been put to death for a long time and that seems like the opposite of progress.