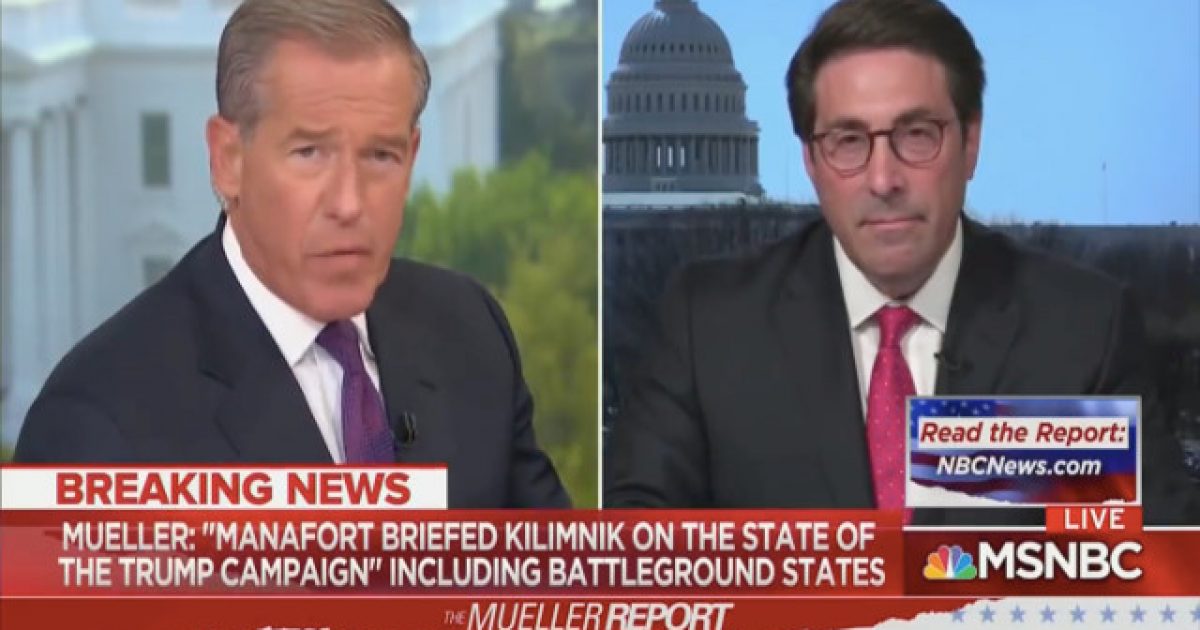 Jay Sekulow, President Trump’s attorney, recently made an appearance on MSNBC, where Brian Williams asked him where, exactly, does the Mueller Report state that there was no collusion between the president and Russia during the 2016 election.

All of this was in response to Attorney General William Barr holding a press conference on Thursday where he summarized specific points of the report and stated emphatically that the overall conclusion is there was no collusion.

“My first question, I’m afraid, is going to verge on plain English,” Williams began. “Where did the attorney general get off with that characterization this morning, including four mentions that there was no collusion? What document was he reading, compared to the one we’re left with?”

Sekulow responded, “Well, page two of the document says, ‘The investigation did not establish that members of the Trump campaign coordinated with the Russian government in its election of interference activities.’ So it’s right from the document itself.”

“Have you read part one?” Williams retorted.

“I have read part one and part two,” Sekulow added.

Williams shot back, “Do you find good news in here for the president and the administration?”

“The investigation—page 181—the investigation did not establish the Contacts described in volume one—that’s the Russian contacts—amounted to an agreement to commit any violation of federal criminal law, including foreign influence and campaign finance laws,” Sekulow followed up. “Yes, I think it’s very good win.”

Ladies and gentlemen, that was the brilliant journalist extraordinaire, Brian Williams, the same man who literally fabricated junk stories about being shot at and all kinds of insanity all to further his own career.

Why anyone still watches this guy is astounding, but what’s even more mind-blowing is how Williams couldn’t seem to wrap his mind around the fact this report clearly stated there was no collusion. It’s right there, on the second page, in plain English. What’s so hard to get about this?

The sudden lack of understanding by folks in the progressive movement has far more to do with the fact they have had their hopes and dreams of impeachment dashed to pieces by the findings of the Mueller Report and have absolutely no idea which direction to go now. They’re like sheep without a shepherd.

It’s pretty pathetic when you think about it.

It has to feel pretty thrilling for President Trump, watching all of these left-wing media folks implode over the findings of this two-year investigation, especially with how hard they attacked him over it all.

Perhaps the mainstream media ought to move on to more important matters facing our nation?