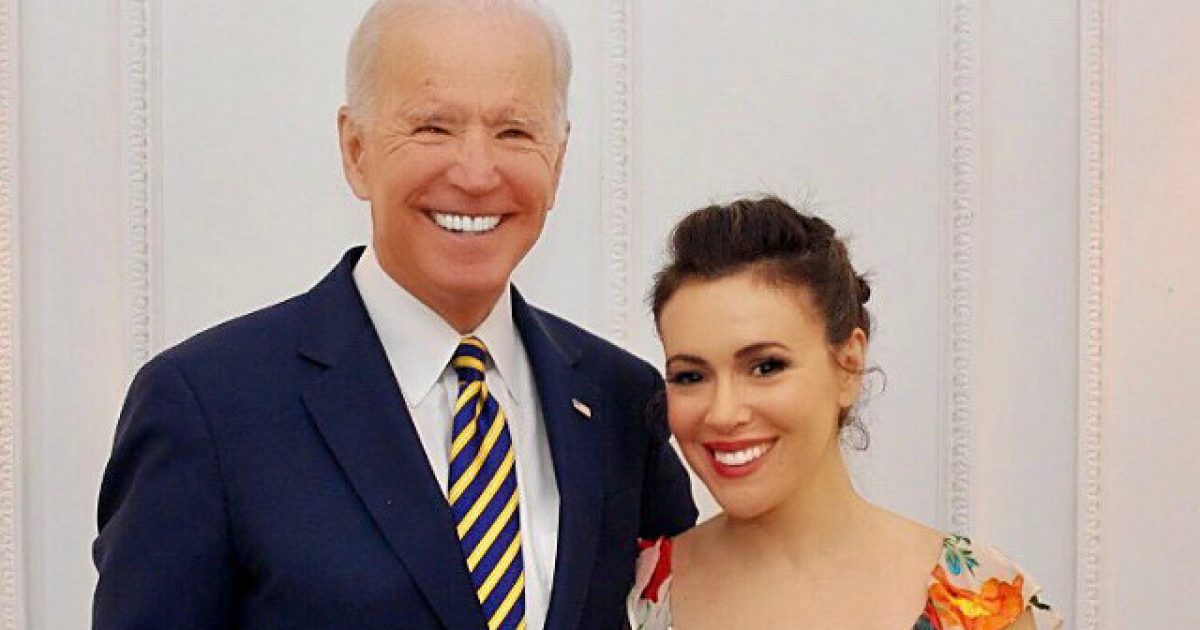 Actress and feminist supporter of abortion Alyssa Milano decided to come to the defense of former Vice President Joe Biden, posting on social media about how important it is to “believe all women,” but to also believe Biden because “we cannot assume all women’s experiences are the same.”

She went on to note her own positive experiences with the possible Democratic Party presidential candidate. However the whole thing didn’t go over so well with her feminist “allies.”

Apparently, the consistent application of one’s political beliefs just isn’t something that Democrats feel is important.

On Friday, former Nevada State Sen. Lucy Flores, a Democrat, published an account in The Cut of an experience at a campaign rally in 2014 “that changed how I saw Joe Biden”: “I felt him get closer to me from behind. He leaned further in and inhaled my hair. I was mortified. I thought to myself, ‘I didn’t wash my hair today and the vice-president of the United States is smelling it. And also, what in the actual f***? Why is the vice-president of the United States smelling my hair?’ He proceeded to plant a big slow kiss on the back of my head. My brain couldn’t process what was happening. I was embarrassed. I was shocked. I was confused.”

Then, on Monday, another woman came out and stated she had a similar experience with Biden back in 2009, stating he “crossed the line.” Apparently Biden grabbed the woman by the back of the neck and pulled her in to rub noses with her. She went on to say she thought he was going to kiss her on the mouth, though she never filed a complaint because he was the vice president.

So after all of this, Milano still felt it necessary to defend Biden.

I am proud to call Joe Biden a friend. He has been a leader and a champion on fighting violence against women for many years, and I have been fortunate to accompany him to events with survivors where he has listened to their stories, empathized with them, and comforted them. pic.twitter.com/cI0jsKlu3P

2. That's who Joe Biden is – a warm, generous individual who believes its on all of us to pay attention to women's stories and experiences.

3. Biden started Its On Us because he believes to meaningfully change our culture, everyone – including those often left out of the conversation like college athletes and fraternity brothers – needed to be part of the movement.

4. Joe Biden’s response that he never meant to make anyone uncomfortable and that he'll listen and learn from anyone who says otherwise is exactly the leadership we need to build a culture where women are heard and are equal.

5. I respect Lucy Flores' decision to share her story and agree with Biden that we all must pay attention to it. But, just as we must believe women that decide to come forward, we cannot assume all women's experiences are the same.

6. I believe that Joe Biden's intent has never been to make anyone uncomfortable, and that his kind, empathetic leadership is what our country needs. Especially now.

This tweet thread then caused a firestorm to come straight down on Milano’s head from her feminist pals. Check this out:

“I believe women. Except for this one. I mean let’s hear her out. But he definitely didn’t do it. Believe me I would know. I’ve met him.”

You're canceled. What the hell is wrong with you?

LOOK at how that man gropes, pets, smells, and kisses more than 50 little girls and women in video clips taken from CSPAN. I double-dog DARE you to leave up these tweets when you're done.https://t.co/wfXhVqILFW

If he was as empathetic as she claims he is, then he would have already stepped down because he'd understand how many people are fucking uncomfortable with him. Being lovey dovey =/= empathy. Empathy is feeling what the other person is feeling.

Alyssa, you need to stop. This is not allyship. It is entirely possible for Biden to both A) have good intentions and feminist policy positions AND ALSO B) exhibit unexamined misogyny in his lack of respect for women's physical space and boundaries. Please don't discredit women.

This is embarrassing. *This* is yalls feminist icon?

Amazing how much nuance you can summon up when a Democrat is the accused.

Girl. This is a bad look on you. Biden can be all of the good things you stated and still have made women uncomfortable.

As you can see, Milano’s defense was not popular with many of her followers on either side of the aisle. Biden may not be intentionally trying to be a creep, but that doesn’t mean he isn’t still being one.

Really though, this isn’t about Biden. It’s about the inconsistency of the radical left, particularly those loud voices in Hollywood who want to shape the American cultural landscape.

One of the most important factors in determining whether or not a worldview has value is if the principles contained in it can be applied equally, fairly, across the board for all people. If it can’t, then perhaps you need to re-examine the foundations of your worldview because it’s likely you’ve built your house on the shifting sand instead of on a rock.