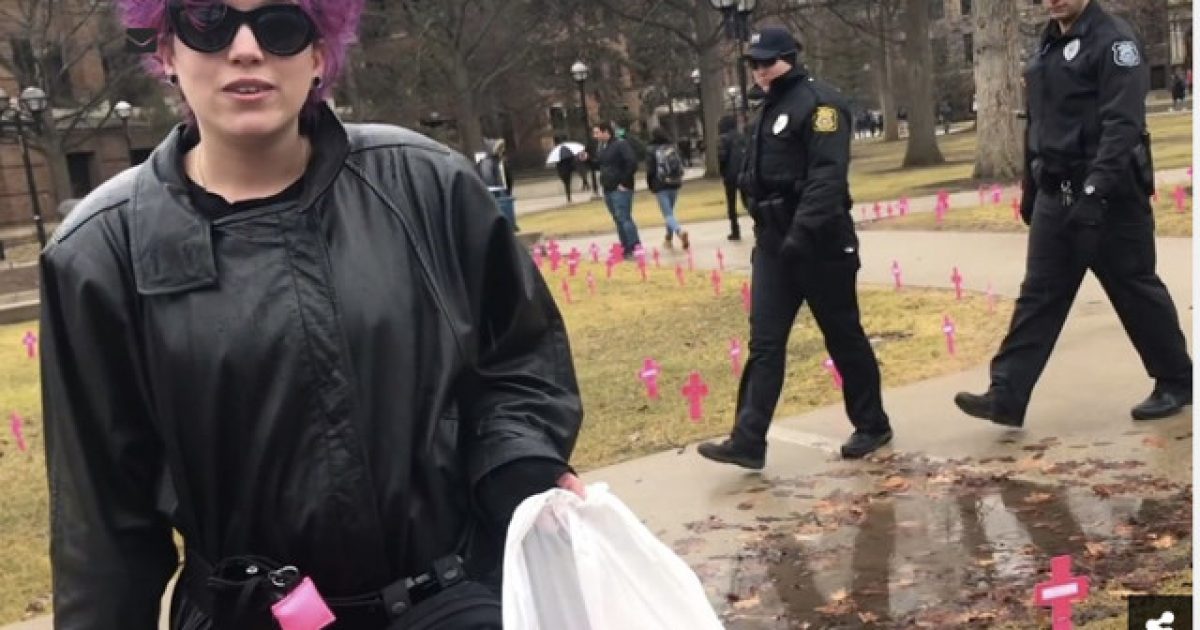 Students for Life at the University of Michigan recently put up what they call a “Cemetery of the Innocents” on their campus, designed to honor all of the murdered children killed through the process of abortion.

The group obtained the school’s permission to hold the memorial, but it seems there were quite a few folks on campus who support the murder of the unborn and decided to voice their feelings in a rather shameful manner.

Various individuals would show up to the display and yank the pink crosses out of the ground and put them in trash bags, making it clear what they thought of the unborn.

The group’s coordinator, Kaylena Wiederhold confronted the individuals and an exchange was captured on video.

One woman sporting a black jacket, dark sunglasses, and pinkish hair — hey, it kinda matched the color of the crosses, at least — was asked why she was pulling up the memorials.

“Because we disagree with it,” she replied.

When asked why she was taking the Students for Life property, she answered, “This is your property? You paid for this?”

Not only that, but the group had a permit — and then she continued with more silliness: “Just because you have a permit doesn’t mean this property is yours.”

Uniformed police showed up and the despicable leftist said, “we were just cleaning up this garbage on this school campus, but we realize that apparently this is somebody’s property, and you’re telling us to leave it, I’m assuming?”

The cops said that was correct.

Despite the very direct answer she received, the woman refused to put the crosses back where she found them and instead dumped them on the ground where she stood.

Isn’t it sad that there are so many people, especially young people, who think it’s okay to act this way with folks you disagree with?

If you don’t like a person’s political position, engage in a civil debate and discussion. Instead, modern day liberals would rather engage in acts of vandalism. It’s shameful, pathetic, and childish.

What’s even worse is how this behavior reflects what they think. They are totally okay with the idea of murdering children, sacrificing them on the altar of convenience, worshiping the god of humanism that runs much of modern culture.

Every human being is made in the image of God, and thus, has value and significance. To murder your most valuable citizens, to deny them the right to life, is so horrendous that those committing such an act should be tried for murder and punished accordingly.

If we can’t defend the right to life, how can we possibly hope to defend our other rights?