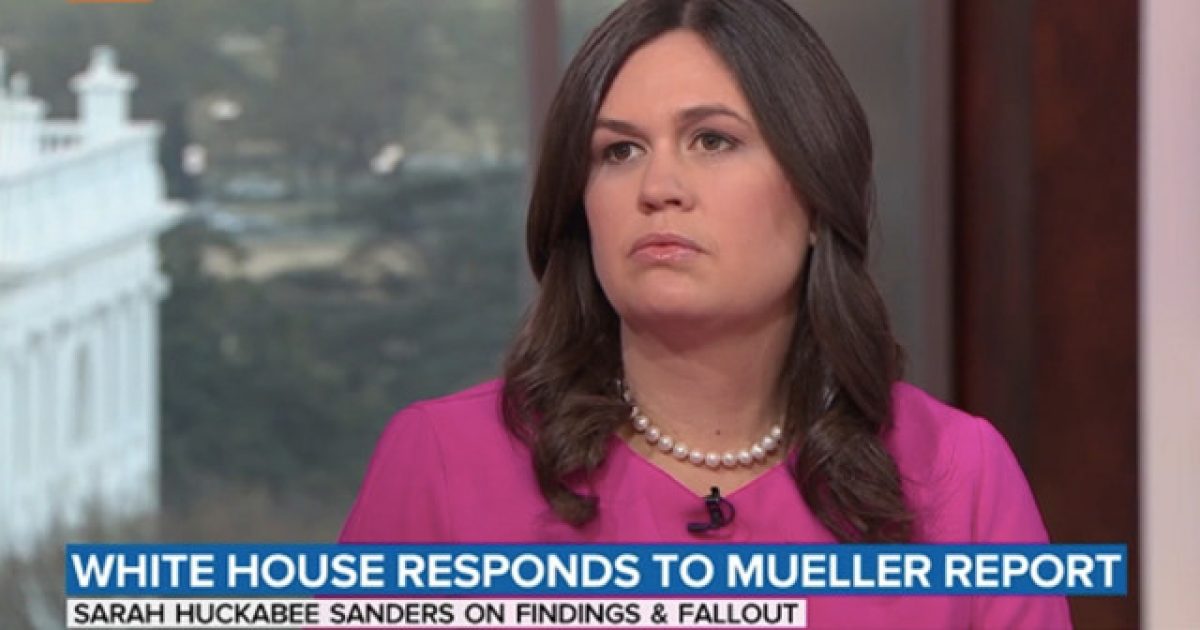 NBC host Savanah Guthrie is getting absolutely scorched by viewers following an interview she conducted Monday with Press Secretary Sarah Huckabee Sanders, with folks raking her over the coals for “biased” questioning.

Sanders had a sit-down with Guthrie on “Today” to share what the Trump administration’s reaction to Special Counsel Robert Mueller’s findings concerning the Russia probe, which stated there was no collusion between Trump’s campaign and Russia.

Guthrie began by pressing Sanders on whether the president would be willing to “waive any claim of executive privilege” amid calls for the full Mueller report to be released. She then questioned claims that the investigation’s wrap-up meant a complete exoneration of the president, saying it was inconclusive whether or not President Trump obstructed justice.

The host asked whether Trump owed Mueller an apology, saying, “For the last two years, the president has absolutely eviscerated Bob Mueller, a lifelong public servant, former Marine, a registered Republican, I might add. He’s called him ‘a national disgrace,’ ‘discredited,’ ‘a prosecutor-gone-rogue’ who oversaw a gang of thugs.”

“In the end, this individual conducted [an] investigation, came to a conclusion that ultimately cleared, as we discussed, the president,” Guthrie continued. “Did Robert Mueller deserve better from the president than this kind of language and behavior?”

Sanders responded, “Frankly, I think the American people deserved better. They didn’t deserve for the election of this president to try to be taken down.”

Guthrie went on to say, “Wait a minute. But the president’s rhetoric about a public servant doing his job?”

This didn’t go over well with Sanders who fired back with, “Are you kidding? The media and Democrats have called the president an agent of a foreign government. That is an accusation equal to treason, which is punishable by death in this country.”

Sanders’ answer did little to deter Guthrie who continued pushing, saying, “Wait a minute — you have kids and you know that if you say ‘Did you do this?’ the answer isn’t, ‘Yeah, but my brother did that.’ So let’s talk about the president’s behavior. He called Robert Mueller…he trashed him for two years, and in the end, Mueller just did an investigation that, ultimately, the president considers a total exoneration of him. Does he owe Robert Mueller an apology for that kind of rhetoric?”

“I think Democrats and the liberal media owe the president — and they owe the American people — an apology,” Sanders shot back.

And here’s how viewers felt about the interview:

#Savannah Guthrie is so biased, she doesn’t even deserve to be on TV, My last day ever of watching the today show

Could @SavannahGuthrie be any more biased? I hate the way she attacks anyone in the political realm who supports @POTUS

Agree with the topic or not I hate seeing how media personalities like Savannah Guthrie think they don’t have to use basic politeness when speaking to someone. Media will interview a serial killer and smile and joke with them but @PressSec is on and she acts like that.

Savannah Guthrie shows her bias in every interview. No professionalism. I stopped watching the Today show in 2016. Couldn’t stand watching her interviews of non Democratic Party members.

Guthrie was incredibly disrespectful, but what should we all expect from a radical leftist working for the mainstream media?

Regardless of how she was treated, Sarah Sanders managed to handle herself well, getting right back in Guthrie’s face when it was necessary, standing by the president.

Trump was forced on many occasions to defend himself against a media that absolutely loathes him and wants to see him self-destruct before he completes his first term. What really chaps their backsides is the fact he fights back. They want to throw barbs at him without him retaliating.

When he bullies the bully, it leaves them frustrated. They like feeling in control and Trump takes that control away from them, so, like any spoiled child, they cry and throw fits.

Just look at the example of Jim Acosta and how he behaves in almost every press conference.

The president doesn’t owe anybody an apology for defending himself from attack. That’s not how it works, Guthrie.