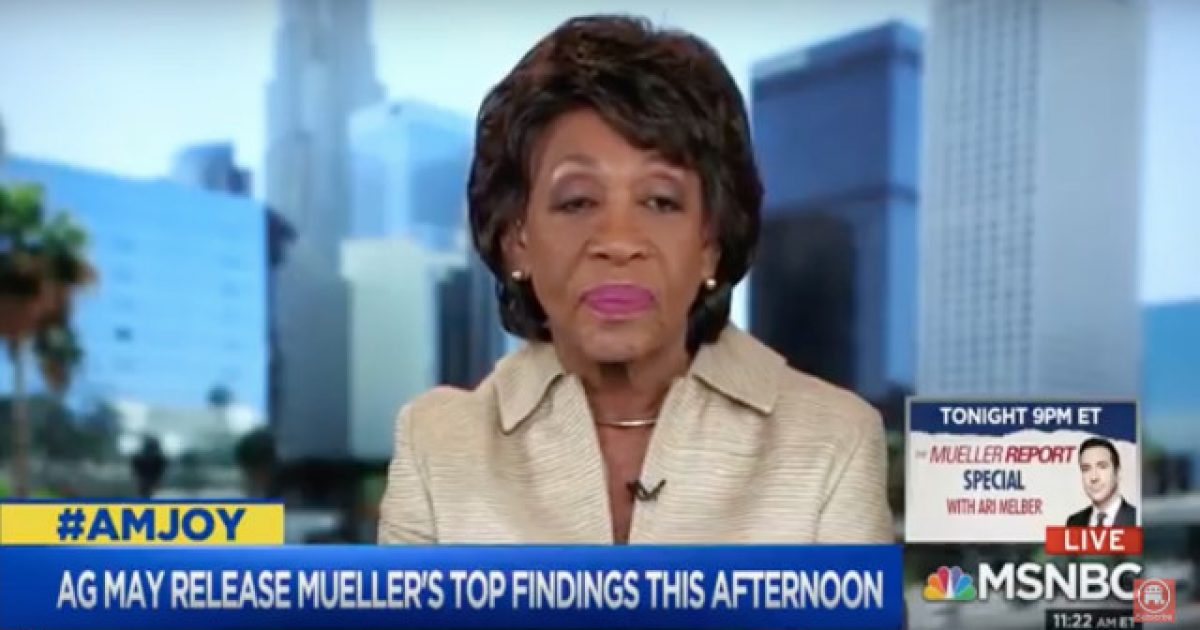 Democrats all across the country are devastated by the fact that the conclusions of special counsel Robert Mueller’s investigation into possible collusion between Trump and Russia to rig the election in his favor proved the exact opposite of what they were hoping for.

So how is the left responding? In utter despair of course. And let’s be honest. There’s nothing more delicious than the taste of liberal tears.

Others, however, have opted to try and spin this whole thing around.

Rep. Maxine Waters, the head cheerleader for the “impeach Trump” movement, stated that Trump “got into people’s heads” to believe there was “no collusion.”

Waters appeared on Joy Reid’s program on MSNBC over the weekend where she was asked about a tweet from former U.N. Ambassador Nikki Haley concerning her belief the president had been “exonerated” by the report’s findings.

“You have Donald Trump supporters, including his former U.N. Ambassador Nikki Haley, out there tweeting and essentially presuming that the president has been exonerated,” said Reid, a presumption that Attorney General Bill Barr’s summary of the report confirmed on Sunday.

After this long investigation both sides agreed to let Mueller do his job & complete the investigation. Everyone has to acknowledge that @realDonaldTrump did not interfere in the investigation. Now the American public needs to accept the results and move on. #EnoughAlready ????????

“Absolutely. Well, I wanted to tell you that this president has a way of trying to get into people’s heads and indoctrinate them,” said Waters. “He’s been saying ‘No collusion, no collusion, no collusion,’ over and over again for a long time now and he’s going to try to conclude that this report is proving that there’s no collusion. And you have a lot of his sycophants who will, you know, take the nod from him and they’ll say the same thing.”

Folks like Waters are so devastated by these findings that they’re clinging to literally anything they can find that might offer even the smallest shred of hope for possibly impeaching the president.

Remember way back during the Obama era, when conservatives went after Obama for actual corruption and impeachable offenses he committed while in office and were labeled racists and haters?

Are people like Waters not doing the exact same thing? And yet, no one is calling them out for their behavior? Something doesn’t seem right here. It’s almost like Democrats are massive hypocrites or something.

Oh. Yeah. That’s because they are.

The findings of this report indicate our president did no wrong doing, which should be a reason for all Americans to celebrate. Imagine how devastating it would be if our voting system had been so severely compromised so as to lead to the election of a candidate that no one really wanted in office?

As it turns out, the American people spoke with boldness in favor of who they wanted in the White House, which is a pill the left is having a hard time choking down.