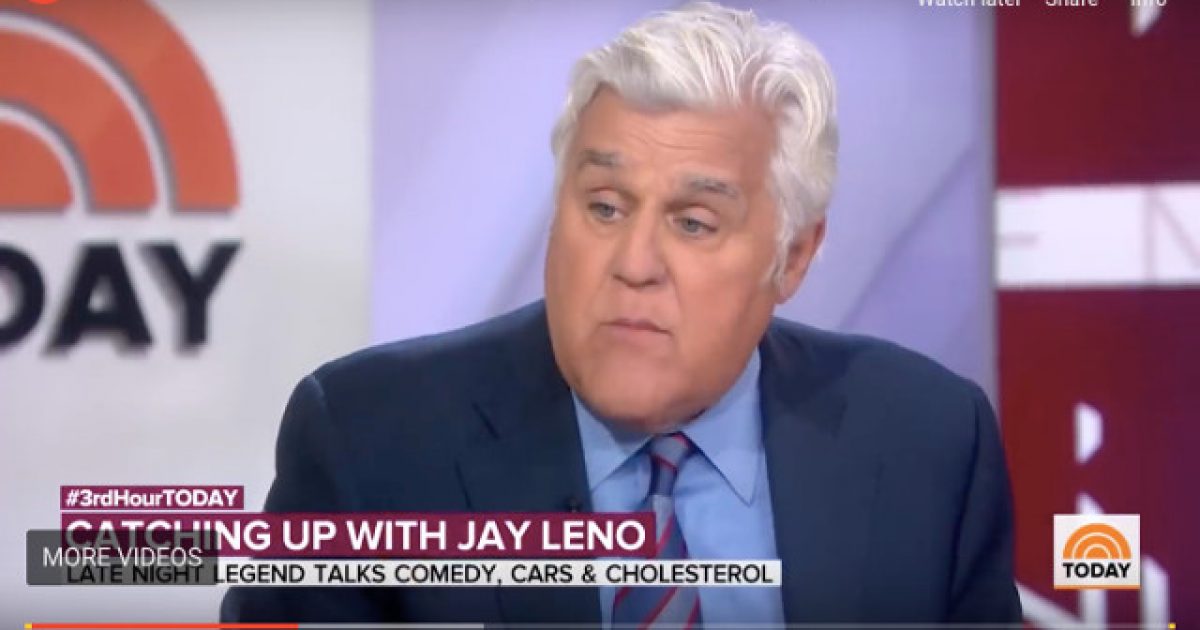 Jay Leno, former host of the “Tonight Show,” who somehow, by some sort of miracle managed to fill the very big shoes left behind by Johnny Carson, recently came out and slammed current late-night shows for their inability to be more objective when it comes to discussing politics.

He stated that he doesn’t miss hosting due to the current atmosphere where “everyone has to know your politics,” and said today’s hosts have failed to learn an important lesson from Carson: don’t let yourself appear to be “one-sided.”

Leno recently made an appearance on NBC’s “TODAY” and had the following exchange with the hosts on the program:

“So it’s been five years since you left ‘The Tonight Show,’ and you see the place we are right now in this country. Do you miss being on the show? Or is it such a different time that it would be hard to do?”

“No, it’s different — I don’t miss it,” said Leno. “You know, everything now is if people don’t like your politics — everyone has to know your politics.”

“I kind of used Johnny [Carson]’s model,” he explained. “People couldn’t figure out: ‘Well, you and your Republican friends…’ or ‘Well, Mr. Leno, you and your Democratic buddies…’ And I would get hate mail from both sides equally. And I went, ‘Well that’s fabulous! That’s exactly what I want.'”

“You know, now it’s all very serious, everything so, so na—” he said, stopping himself mid-line. “I’d just like to see a bit of civility come back to it, you know?”

Later on in the interview, Leno was asked if he thought the pendulum would swing back in the other direction.

“Of course, I think it will swing back the other way.”

Leno couldn’t be more spot on about this particular topic. The current run of late night programming is chock full of try-hards who simply want to take the low-hanging fruit to get viewers the easiest way possible.

Which is to go with the popular culture and only make fun of conservatives and the president, rather than taking pokes at the ridiculousness of the Democratic Party, who, at the moment, is absolutely providing boundless comedic material for anyone daring enough to use it.

Let’s hope Leno’s right and the pendulum does indeed swing the other way, creating a fresh path for comedy without the bounds of political correctness.