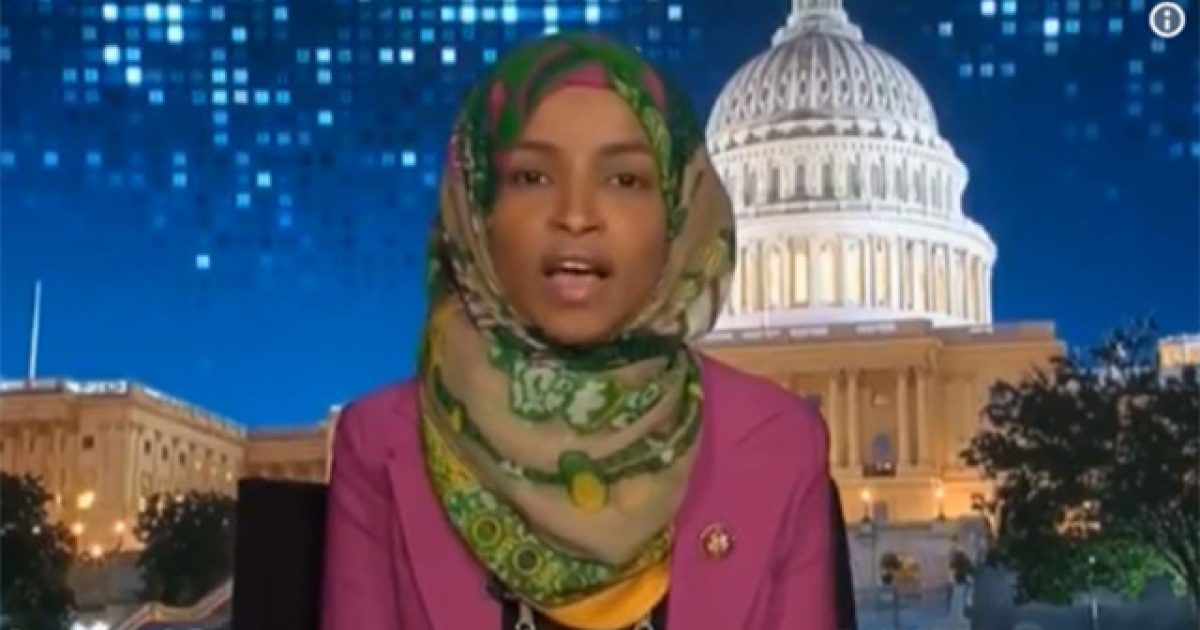 Rep. Ilhan Omar has a well earned reputation for making anti-Semitic remarks, but what she said during a town hall meeting on Wednesday night are some of the most blatantly hateful remarks she’s made yet.

Apparently, according to Omar, her “Jewish colleagues” have hatched some diabolical plot to try to silence her. Oh but she didn’t stop there. Pro-Israel groups are also making politicians loyal to Israel too.

This woman doesn’t know when to quit.

Omar — who is a well-documented anti-Semite — was flanked by fellow far-left Democrat Reps. Rashida Tlaib (MI) and Pramila Jayapal (WA) during the event at a Busboys and Poets restaurant.

Omar has been under intense scrutiny from forces across the political spectrum for promoting anti-Semitic conspiracy theories and using anti-Semitic tropes, which earned her condemnation from her own party.

“But at an event last night, Omar went much farther,” NYMag reported. “After an audience member shouted out, ‘It’s all about the Benjamins,’ at which she smiled, she proceeded to state, ‘I want to talk about the political influence in this country that says it is okay to push for allegiance to a foreign country.'”

“This is much worse. Accusing Jews of ‘allegiance to a foreign country’ is a historically classic way of delegitimizing their participation in the political system,” NYMag continued. “Whether or not the foreign policy agenda endorsed by American supporters of Israel is wise or humane, it is a legitimate expression of their political rights as American citizens. To believe in a strong American alliance with Israel (or Canada, or the United Kingdom, or any other country) is not the same thing as giving one’s allegiance to that country. Omar is directly invoking the hoary myth of dual loyalty, in which the Americanness of Jews is inherently suspect, and their political participation must be contingent upon proving their patriotism.”

In one exchange, Omar claimed without proof that her “Jewish colleagues” “designed” a plan “to end the debate” on Israel by accusing her of being anti-Semitic.

Anti-Semitic Rep. Ilhan Omar (D-MN) pushes a conspiracy theory about her “Jewish colleagues,” says they have “designed” a plan to accuse her of being anti-Semitic “to end the debate” on Israel pic.twitter.com/iIyHE5TvHd

Anti-Semitic Rep. Ilhan Omar (D-MN) pushes the anti-Semitic dual loyalty canard, says: “I want to talk about the political influence in this country that says it is okay to push for allegiance to a foreign country [Israel].” pic.twitter.com/Df3HSC6WhU

All of this controversy is starting to have a rather negative impact on her constituency back home. A local newspaper recently published a letter to the editor from Maxine Baker who wrote about how much she regretted voting for Omar and even called on her to resign her post:

I voted for Rep. Ilhan Omar. I am sorry I did. My hope was that now we have a large Somali population in Minnesota that it would be a good thing. To be elected to the United States Congress is such an honor and she could have done so much to promote relations between Somalis and other immigrants. But to make anti-semitic remarks about our Jewish allies is disgusting.

Our Jewish friends and neighbors come from the Holocaust. Isn’t that enough and didn’t the Somali people come to our country because they were being persecuted? In my opinion, Rep. Omar is not a good representative of this country. There is no place for racism in our Congress. I urge Rep. Omar to resign.

This woman is out of control, and there’s no way that she should be allowed to continue to serve on the Foreign Affairs Committee. She needs to step down or just completely resign, effective immediately.

Part of being a public servant in the government is being able to represent folks from a variety of different walks of life. If this cannot be done equally and fairly by an individual, they have no business being in the office.

It’s well past due for Omar to bring her very brief political career to a close.