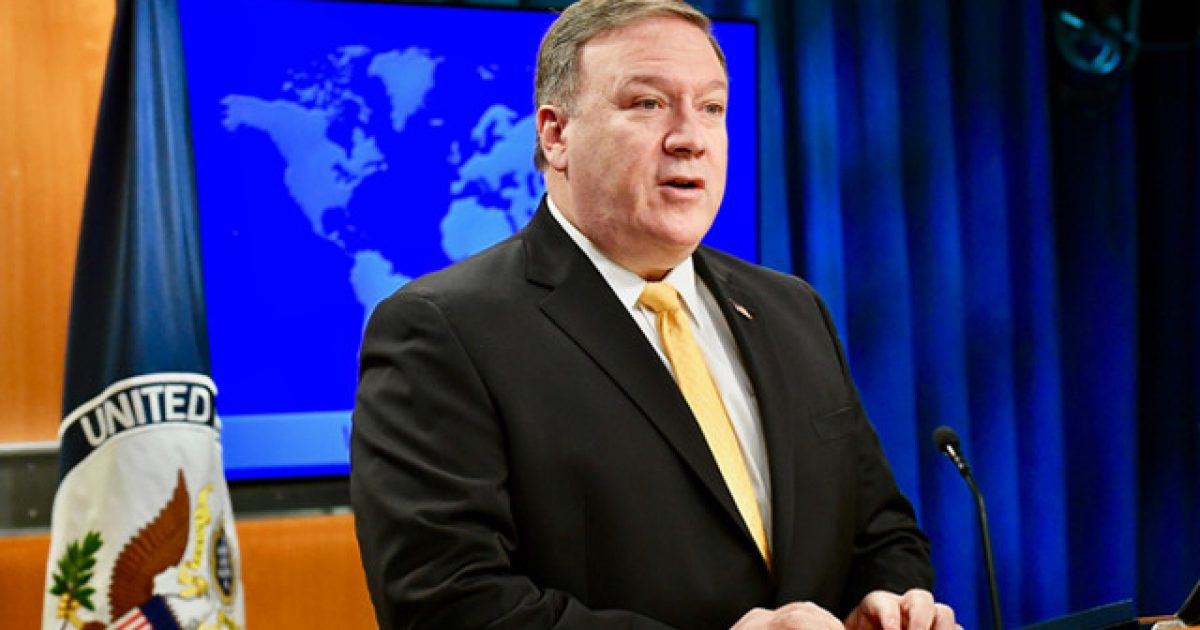 Secretary of State Mike Pompeo announced on Monday night that the United States would be withdrawing all of the remaining personnel from the U.S. Embassy in Venezuela this week, as the situation in the country continues to deteriorate.

Who would’ve thought that socialism could destroy an entire country and leave it in ruins? Oh. That’s right. Capitalists.

Pompeo wrote on Twitter, “The U.S. will withdraw all remaining personnel from @usembassyve this week. This decision reflects the deteriorating situation in #Venezuela as well as the conclusion that the presence of U.S. diplomatic staff at the embassy has become a constraint on U.S. policy.”

The U.S. will withdraw all remaining personnel from @usembassyve this week. This decision reflects the deteriorating situation in #Venezuela as well as the conclusion that the presence of U.S. diplomatic staff at the embassy has become a constraint on U.S. policy.

Speaking from the State Department briefing room on Monday, Pompeo stated, “Over the past few days, Venezuelans have been thrown literally into darkness thanks to a massive electrical blackout. Patients awaiting treatment in hospitals are dying, food is rotting, telecommunication networks are entirely collapsing.”

Pompeo then delineated exactly how responsible Venezuelan president Nicolas Maduro was for the horrific conditions of the country, and how criticism of the Trump’s administration harsh policy toward the Maduro regime was badly misplaced:

It’s worth spending just a minute on how we got here. Nicolas Maduro promised Venezuelans a better life in a socialist paradise, and he delivered on the socialism part, which has proved time and time again is a recipe for economic ruin. The paradise part, not so much. Just consider the facts. The World Bank ranks Venezuela’s business environment 188th out of 190 countries. Only Somalia and Eritrea are worse. The United States did not do that. The expropriations of land and industry and an end to the rule of law did that. Agriculture production is down 70 percent since 2006, manufacturing down by 75 percent, oil production down by half since Maduro took power in 2013. The United States didn’t do all that. Maduro did that.

So how bad are things in Venezuela? Pretty darn bad, actually:

Pompeo then pointed the finger at Russia and Cuba for helping to contribute to the mess unfolding in Venezuela.

But this story – this story is not complete without acknowledging the central role Cuba and Russia have played and continue to play in undermining the democratic dreams of the Venezuelan people and their welfare.

First, Cuba. No nation has done more to sustain the death and daily misery of ordinary Venezuelans, including Venezuela’s military and their families, than the communists in Havana. Cuba is the true imperialist power in Venezuela. The Cuban government of Miguel Diaz-Canel provides political cover for Maduro and his henchmen so that they may stay in power. It’s Cuba that has offered Maduro its unwavering solidarity. It’s Cuba that calls Venezuela’s true government, led by Interim President Juan Guaido, which 54 of the world’s democratic nations recognize as a legitimate government – the Cubans call this a puppet government of the United States.

Yet it’s Cuba that’s trained Venezuelans’ secret police and torture tactics, domestic spying techniques, and mechanisms of repression the Cuban authorities have wielded against their own people for decades. Members of the Cuban military and intelligence services are deeply entrenched in the Venezuelan state. Cuban security forces have displaced Venezuelan security forces in a clear violation of Venezuelan sovereignty. I even hear that Maduro has no Venezuelans around him. Many of his personal security and closest advisors are acting not at the direction of the Venezuelan people, and frankly, perhaps not even at the direction of Maduro, but rather at the direction of the Cuban regime. They provide physical protection and other critical material and political support to Maduro and to those around him. So when there’s no electricity, thank the marvels of modern Cuban-led engineering. When there’s no water, thank the excellent hydrologists from Cuba. When there’s no food, thank the Cuban communist overlords.

Why is Cuba asserting so much influence in Venezuela? What’s in it for them? Follow the ideology, follow the corrupt elites, and perhaps most importantly, follow the money. Cuba’s communist revolutionaries share a natural affinity with Maduro’s socialists. They both disdain private property rights, the rule of law, and free and fair elections. The very same economic theories that have decimated the Cuban economy since 1959 have now turned Venezuela’s economy, one of the richest in Latin America, into a case of decline that economists study with amazement and horror. Both of these countries routinely violate the basic human rights of their peoples.

The two nations also share a feature: a deeply corrupt ruling class. Maduro learned from the Castros that the best way to stay in power is to buy enough generals to protect you and make sure that the only way to be rich, or even to avoid poverty, is to feed off the regime and stay in its good graces.

Lastly, there’s an economic relationship between Cuba and Venezuela as well. The Maduro regime sends up to 50,000 barrels of oil to Cuba per day, and Cuba needs this cheap Venezuelan energy to prop up its tottering socialist economy, while Maduro needs Cuban expertise in repression to keep his grip on power. That’s a match made in hell.

Russia, too, has created this crisis. It, too, for its own reasons is thwarting the Venezuelan people’s legitimate democratic hopes and their dreams. Moscow, like Havana, continues to provide political cover to the Maduro regime while pressuring countries to disregard the democratic legitimacy of the Interim President Guaido.

It’s Russia – it’s Russia that vetoed the UN-sponsored resolution on Venezuela in the Secretary Council on February 28th. This UN Security Council resolution called for unhindered access in delivery of assistance to all those in need and supported the restoration of democracy and the rule of law in Venezuela. It’s Russia that chose, rather than supporting this noble goal, it instead put forward its own resolution that served no purpose other than to bolster the illegitimate Maduro regime.

Fortunately, the international community sharply rebuked Russia for this critical circus. Russia scrounged only four votes from the 15-member UN Security Council. Russia claimed at the UN that humanitarian aid deliveries were merely an attempted illegal border crossing for the delivery of unknown cargo. The world knows what was really going on that day.

Russia has also used its state-sponsored disinformation organs like Russia Today and Sputnik to divert attention from the humanitarian disaster of the Maduro regime. Russia has spent an enormous amount of money in Venezuela to support close ties with the regime. Russian loans and investments in Venezuela total more than $17 billion. Russian companies continue to this day to try to help the Maduro regime turn the country’s gold reserves into cash, further squandering the assets of the Venezuelan people, assets they will need to rebuild their future.

Russia’s state-owned oil company Rosneft continues to purchase crude oil cargoes from PDVSA, Venezuela’s state-owned oil company in defiance of U.S. sanctions. And Rosneft’s CEO, Igor Sechin, continues to throw a lifeline to the regime. Recently, Sechin ordered Rosneft to sell even more oil to the Maduro regime. You’ll recall that PDVSA was once known as the crown jewel of the Venezuelan people. PDVSA is today now a personal ATM for the Maduro regime and for Russian oligarchs and kleptocrats. And Russia too has provided the Chavez and Maduro regimes with large quantities of arms, including 5,000 portable air defense systems, and other forms of lethal assistance. The Kremlin is standing with its Venezuelan cronies against the will of the people of a sovereign nation to protect a Moscow-friendly regime.

The lesson we should all learn from Venezuela is the same one we should’ve learned long ago from the myriad of countries who have been driven to failure by attempting to implement socialism.

In summary, socialism doesn’t work. There are universal rules and principles to human nature and society that just simply cannot be violated without dire consequences. Capitalism, when applied correctly and morally, understands these rules and works within them, enabling much success, prosperity, and liberty for people and communities.

It’s time for us as a civilized people to stop pretending socialism is a viable social order for the betterment of mankind. It’s clearly not.