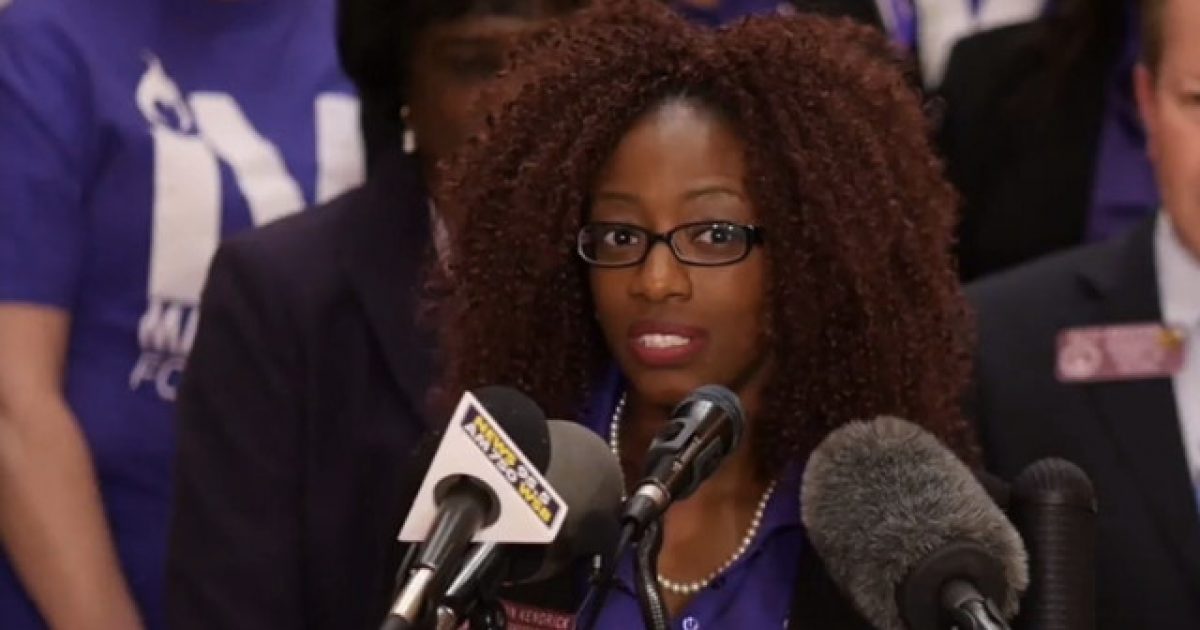 Georgia Democratic State Rep. Dar’shun Kendrick is a big fan of having the legal right to murder unborn children in the womb, so much so that she is completely opposed to a heart beat bill in her state and has put forth a new piece of legislation that shows just how passionate she really is about the issue.

Kendrick recently spoke with Rolling Stone about the “Testicular Bill of Rights” she discussed on Twitter Monday morning.

This is insanely stupid.

As a way of protesting the Georgia House of Representatives passing a bill last week banning abortions after the fetal heartbeat detection, Kendrick spelled out how she wants to “regulate” men’s bodies:

Before men can get Viagra or or “any erectile dysfunction medication,” they have to get permission from their sexual partners.

Vasectomies are banned, and doctors who perform them are charged with crimes.

It’s “aggravated assault” for men to have sex without condoms.

Paternity testing is required between six and eight weeks of pregnancy — and then fathers-to-be must start paying child support “IMMEDIATELY.”

Kendrick added to Rolling Stone that her point is to “bring awareness to the fact that if you’re going to legislate our bodies, then we have every right to propose legislation to regulate yours.”

In regard to Georgia’s “heartbeat bill,” it’s expected to pass the state Senate and then would await Republican Gov. Brian Kemp’s signature, the magazine said.

Kendrick clearly stated that such a bill is unconstitutional and that, apparently is her point. She’s trying to say that any bill limiting the murder of the unborn is unconstitutional because the mother has the right to do what she wants with her own body.

“It’s unconstitutional on purpose: this is a test case. It is a case to test Roe v. Wade,” she added to the magazine. “They’re hoping that it gets up to the Court of Appeals — the 11th Circuit is one of the most conservative court circuits that we have, and they’re hopeful that they will uphold part of it, and then they’ll take it all the way to the Supreme Court. They know exactly what they are doing. This is intentional.”

The problem here is that the baby growing inside a woman’s womb is not her body. It’s a totally separate human being, a precious soul made in the image of God. Murdering that person is a denial of their most basic right, the right to life.

As far as being able to do whatever you want with your own body, to some degree that is true, but in many others, not so true. Your body, even if you’re an unbeliever, does not belong to you. It belongs to God. You do not have the right to dishonor your body and thus by extension dishonor God.

Whether you believe in Him or not is irrelevant. You can say you don’t believe in semi-trucks, but if you step out on a busy highway, you stand a high probability of meeting one face-to-face.

We can argue from a scientific standpoint about this as well, and the evidence is still in favor of the pro-life point of view. However, if we really want to discuss the morality of abortion, we must appeal to an objective standard of right and wrong from an all-knowing, all-powerful source outside of ourselves. That would be God and His law.

And the law says, rather plainly, “you shall not murder.”