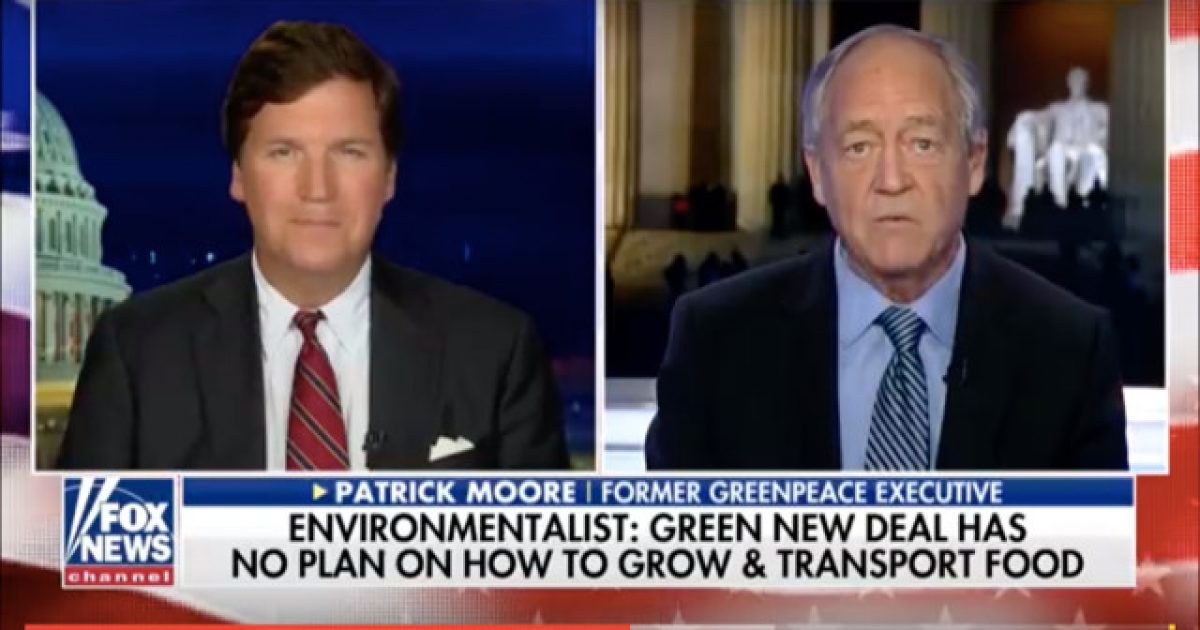 Patrick Moore, co-founder of Greenpeace, recently made an appearance on Fox News where he shredded Rep. Alexandria Ocasio-Cortez’s Green New Deal claiming that such a socialist policy would spell the end for human civilization.

Okay, maybe a tad bit on the dramatic side, but you know, he’s not wrong. At all.

Speaking with Fox News host Tucker Carlson, Moore, who co-founded one of the most prominent environmental organizations in history, said implantation of the Green New Deal, a policy spearheaded by Ocasio-Cortez, would send human existence into a downward spiral.

“It would be basically the end of civilization if 85 percent of the world’s and and also 85 percent of the U.S.’s energy in the form of coal, oil, and natural gas were phased out over the next few years, like 10 years,” Moore explained.

Moore suggested that nuclear energy could be a viable replacement for electricity, but said the possibility of nuclear energy becoming a prominent energy source is unrealistic because “the greens are against nuclear.”

“So when I tweeted the other day and had a huge response — over 3 million impressions on Twitter — when I said ‘You don’t have a plan to feed 8 billion people without fossil fuels or get the food into the cities where it’s needed.’ That requires large trucks, and there’s not going to be electric trucks anytime soon hauling 40 tons of food into the supermarkets, where the people in the cities probably thinks it originates in the supermarket,” he explained.

Moore also went on to explain that if fossil fuel energy was banned, it would mean the end of agricultural production as that industry would collapse in a very short period of time. This would then trigger the demise of human civilization due to agriculture being a critical component of human flourishing that would no longer have reliable transportation into bigger cities and urban centers.

He also says that the Green New Deal would be disastrous on a global level if applied all around the world as it would result in the mass destruction of forests everywhere, as wood would be the only viable and acceptable energy source humans could use.

It’s grim and dark, but you know, he’s spot on. This Green New Deal is untenable, and it seems that the majority of the Democratic Party know and understand this, which is why they aren’t coming on board with it.

Sure, you have a few folks who are all gung-ho over it, mostly the younger, idealistic, out-of-touch-with-reality freshman class in Congress, but for the most part, people know this kind of plan would never work.

Now if only someone like AOC would grasp this reality.