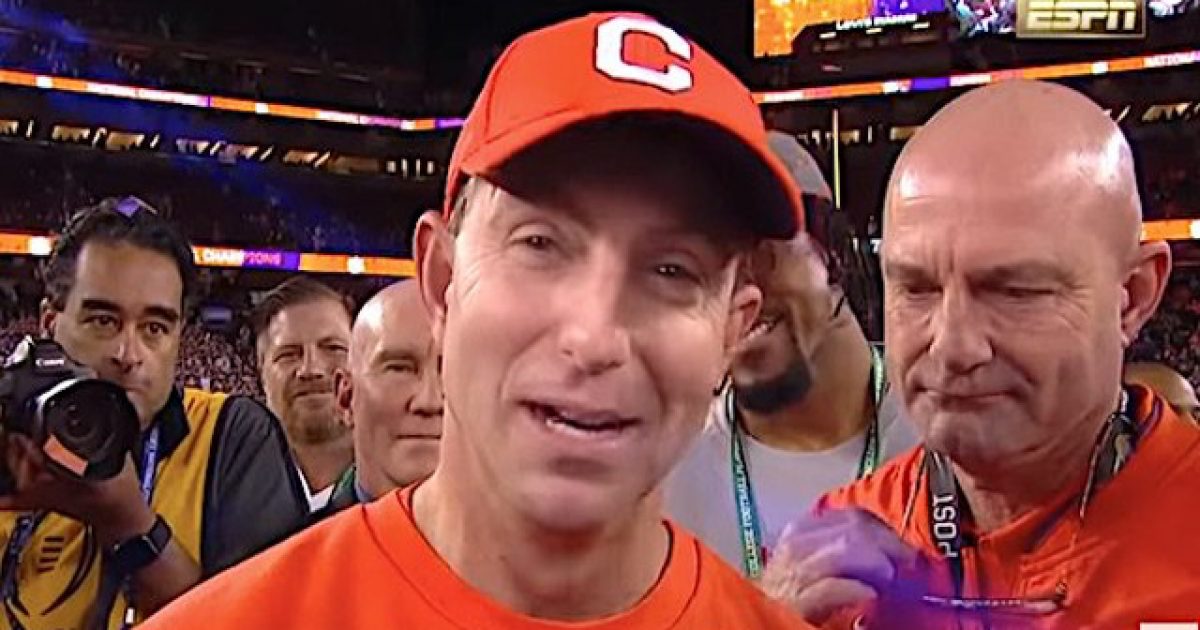 Clemson Tigers head coach Dabo Swinney was given the opportunity to speak to the chamber of the South Carolina state House for the second time earlier this week.

During his speech, he specifically addressed the issue of unity which ended up being the most powerful aspect of his entire speech.

Swinney appeared at the podium on the floor of the state House Tuesday and offered up some major words of inspiration.

The coach, who was there following the Clemson Tigers’ second national championship win in three years, delivered a 20-minute speech rife with standing ovations.

Delivering a message similar to his appearance two years ago, Swinney said that football is a sport that unifies people from diverse backgrounds.

“The same things that won big for us will win big for this state and the people in this room,” Swinney told the gathered lawmakers. “It’s called ‘team.’ It’s having a common purpose. … Love, trust, respect, and passion. Nothing great happens without some passion and enthusiasm.”

The coach also discussed his team’s off-the-field victories, and noted that 66 players had maintained a 3.0 or greater grade point average during the season.

According to the State, the team was comprised of players from “87 different cities and 18 different states.”

“They held different religious and political beliefs. They came from different families, neighborhoods, and socioeconomic backgrounds. They lost teammates who transferred and even one by an untimely death in the middle of the season,” the publication noted.

“This group of young men was a team in every sense of the word,” he said. “They loved each other and every day they were committed to the purpose of making the 2018 Clemson Tigers the best that they could possibly be.”

“Y’all may have differences just like my team,” Swinney told the lawmakers, “but I know you all love South Carolina and the people of this state, and that common bond should create the singleness of purpose that it takes to make South Carolina the best it can be.”

“That’s what we try to do at Clemson every year,” he added.

This is a message we all need to hear in this day and age. We’re all so divided that we often forget just how much we have in common. Many of us enjoy the same life experiences.

The color of our skin, our politics, ect. These are just outward things. Sure, they can be important in our exploration of culture, but ultimately, we’re all made of the same material.

Here’s to hoping people take this message to heart.