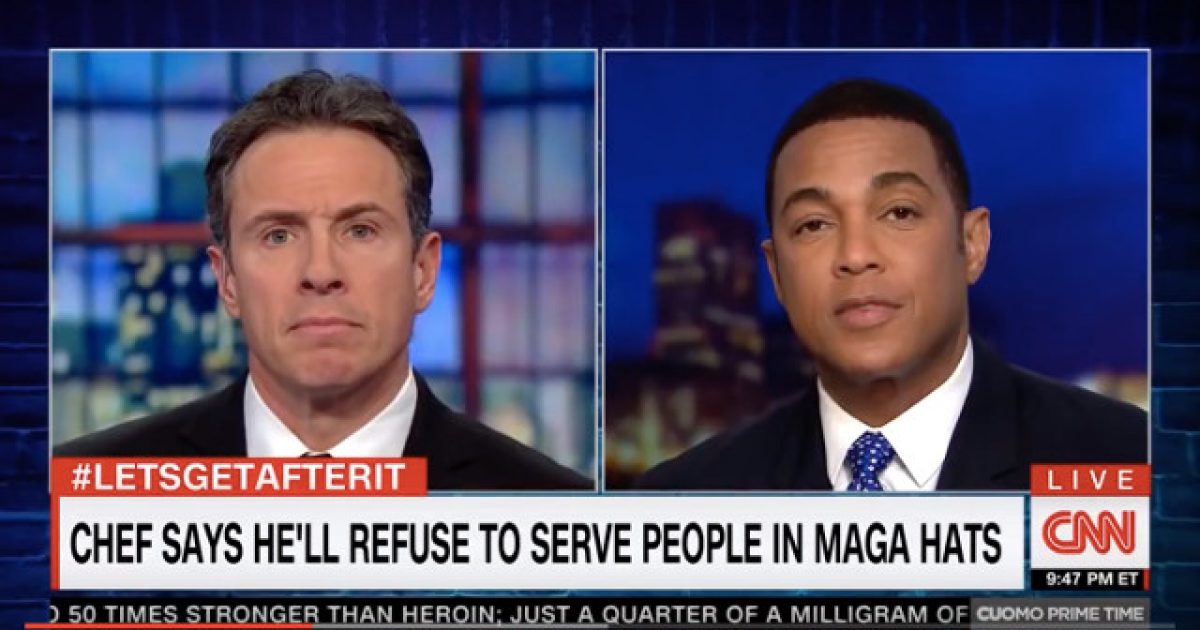 According to CNN’s Chris Cuomo, if you rock a MAGA hat, you’re basically wearing the equivalent of a t-shirt that says, “I hate black people” on it.

Seems a bit ridiculous and melodramatic, right? Then again, this is CNN we’re talking about so it’s not that shocking.

“That’s how people like [chef J. Kenji López-Alt] see the MAGA hat,” Cuomo said during a discussion with Don Lemon, who hosts the show after him.

The pair briefly discussed the story a San Francisco chef known as Kenji who vowed he will not serve anyone wearing a MAGA hat. “It hasn’t happened yet, but if you come to my restaurant wearing a MAGA cap, you aren’t getting served, same as if you come in wearing a swastika, white hood, or any other symbol of intolerance and hate,” said Kenji, the chef-partner of Wursthall in San Mateo, in a now-deleted tweet.

Cuomo asked Lemon how he viewed the situation, prompting Lemon to say he believes people should be able to wear whatever they want.

“I don’t like banning. I don’t like boycotting. I don’t like people getting fired for making honest mistakes, but your clothing tells a story. And if you are putting certain symbols in your home or in front of your house, things tell stories, and you should be aware of the entire story they tell, not just the little part of it that you want to be told,” Lemon said.

Cuomo launched into a monologue about whether a private company has the right to ban someone based on their MAGA hat. He brought up the “baker with the cake” Supreme Court case, saying it was about refusing a group of people service that should have been a “protected class.” The Supreme Court ruled in favor of a baker in Colorado who refused to bake a cake for a same-sex couple, citing his religious beliefs, in Masterpiece Cakeshop v. Colorado Civil Rights Commission. The ruling held the Colorado Civil Rights Commission showed hostility toward the baker based on his religious beliefs.

Cuomo added that unless Trump supporters can argue they should be a protected class, they don’t have much of an argument, in his view.

“Here’s my problem on this issue. Ordinarily I’d go down the line of ‘be bigger than that,’ but I don’t want to fold to the trap of underselling the significance of the trigger of the expression to people,” Cuomo said. “I think the more appropriate analogy to say is if people were wearing shirts that said, ‘I hate black people.’ Would he be okay to say, ‘Don’t come into my place with that.’ And I think most people would be like ‘yeah.'”

Lemon went on to state that anyone who wears a MAGA hat must be willing to own everything that comes with President Trump, even if they disagree with certain things he says or does.

That’s the kind of mentality the left has these days.

The MAGA hat says “Make America Great Again.” What’s so wrong with wanting your own home country to be successful, prosperous, and free? This seems like the unpardonable sin to the left.

Liberals think that if you want a border fence, strong immigration legislation, and putting your own nation and it’s people first, that makes you a racist. They twist the meaning of the message. To “Make America Great Again” in their eyes means having no people of color.

No one ever said such a thing. This is exaggeration on their part and they know it.

It’s just plain ridiculous that this is even a thing.