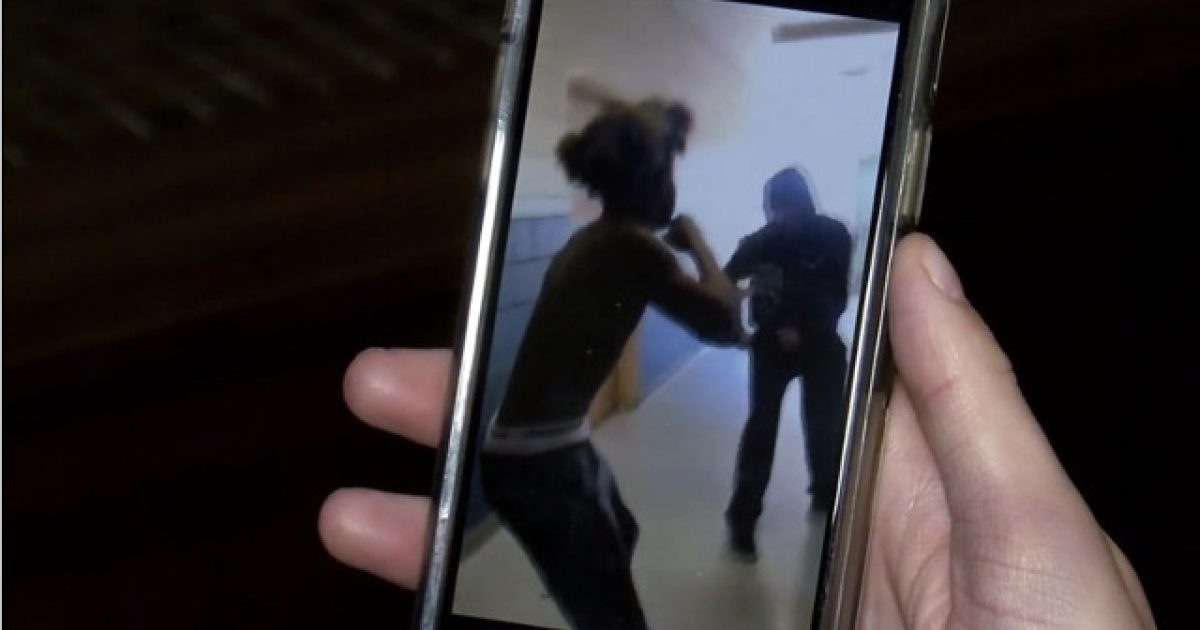 A mother of a white student at a Las Vegas high school is saying that a black gang has been going around beating up on white kids, on school property, claiming they view the white students as “weak.”

This, ladies and gentlemen is the end result of the left’s divisive racial narrative.

The mother — who went by Sherry for the station, as she didn’t want to be fully identified — told KSNV that Centennial High School suspended her 16-year-old son in January over a fight in a school bathroom. But she added to the station that she soon learned a gang of 15 to 20 black male students had been targeting him for a week.

Her son told KSNV the gang forced him to fight three times. The fights were recorded on cellphone video, the station added.

“The kid throws my son on the floor and is stomping him all in the head,” his mother remarked to KSNV, adding that “his good friend told me that they target white kids only because they feel that they’re weak.”

Her son also didn’t want to be identified and added to the station that the gang members “haven’t fought anybody that’s not white. They haven’t fought any African-Americans or Mexicans. It’s all been white people.”

Sherry’s son says that a friend of his was jumped by the gang and then they took his shoes.

The boy apparently discussed the attack on social media, which resulted in him being surrounded by these thugs the very next day and attacked in the locker room before gym class.

“They said we’re gonna give you an option, you can go out and fight us in the hallway, or we can just jump you and get you right here in the locker room,” he recalled to the station.

The day after that he told KSNV the gang again forced him to fight. A final video was recorded in the school bathroom, the station said, which shows Sherry’s son fighting yet another gang member.

“School administration and school police are aware of the matter and appropriate action will be taken. CCSD investigates every reported case of bullying and takes appropriate action. We are unable to discuss individual student disciplinary matters due to privacy laws. However, in general, students can face administrative disciplinary action at school or be referred to law enforcement for possible criminal prosecution depending on the severity of the matter. Law enforcement has been involved, and as they investigate the matter, we strongly encourage students and members of the community not to share footage of this incident or any other student fights. Showing this video serves no purpose other than to further ridicule and embarrass the victim and embolden bullies. Additionally, per state law, students can face discipline for knowingly and willfully transmitting or distributing video/images of bullying with the intent to encourage, further, or promote bullying. Any student who captures photos or video of an assault on-campus, off-campus, on a bus, or during a school activity should immediately turn the footage over to a teacher, school administrator, or police. We investigate and address all concerns of bullying.”

CCSD police have issued the students involved in the attack criminal citations, meaning they will now have to appear in juvenile court.

This is no doubt the fruit of an “us vs. them” mentality, which has been pushed on young kids through the media and entertainment industries who have profited from racial division and tension over the last several years.

It’s time for us as a people to find our common ground with one another and put arbitrary differences, like race, to the side, joining together to make this world better for our children and future generations.