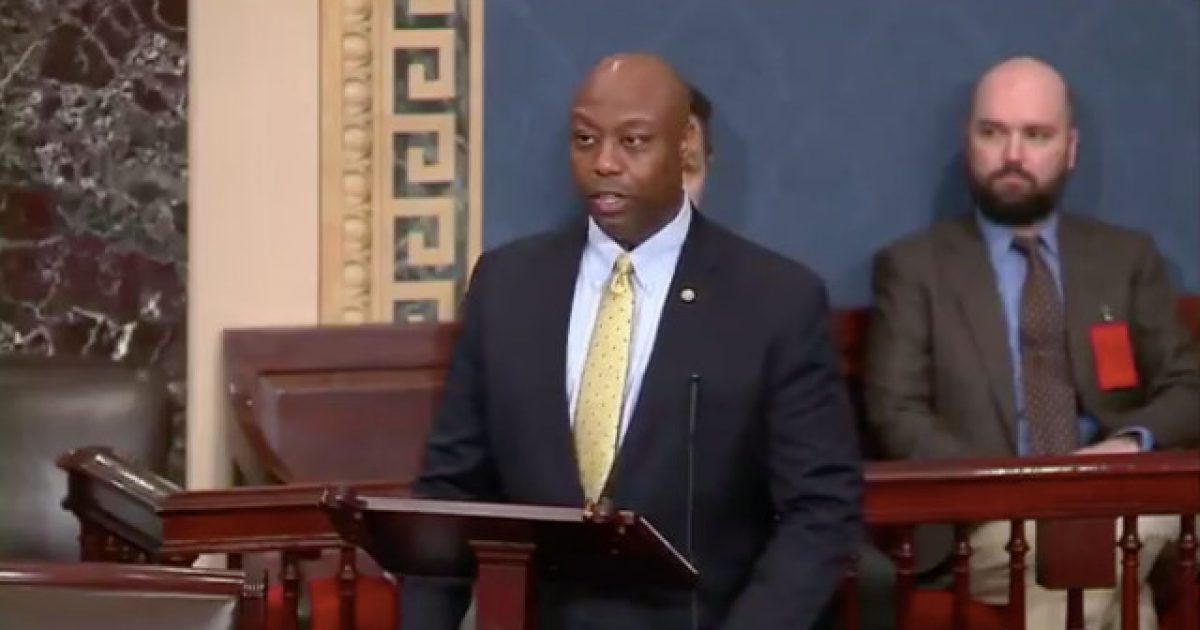 Just one day after Senate Democrats decided to take a stand on the wrong side of history and reject a bill that was created to help protect babies born alive from failed abortions, GOP Sen. Tim Scott delivered a powerful speech on the Senate floor addressing his Democratic colleagues about the value of our children’s lives.

This is common sense. This is human decency. This is not an issue of being pro-life or pro-choice. This is being pro-child – which we all should be. #BornAliveAbortionSurvivorsProtectionAct pic.twitter.com/M5Gvn1Ve0K

“We are a nation that must continue to value life, and for some reason, somehow, this body missed that opportunity to reinforce that value system before the American public, to say each child born, no matter your state, no matter your challenges: you have an intrinsic value,” said Scott.

The senator opened his remarks by explaining that he missed the vote on Republican Sen. Ben Sasse’s Born-Alive Abortion Survivors Protection Act by four minutes due to a flight delay, which he found “quite frustrating.”

“But what’s frustrating even more than that,” Scott said, “is that, in a nation of good conscious, that we would be debating, having a conversation about, a child who was born — sitting there: alive — separated from her mother. And that there would be a question of whether or not that child should be able to continue to live.”

Scott noted that the issues of late-term abortions and infanticide were recently raised in New York and Virginia. Governor Andrew Cuomo (D-NY) recently signed a bill to allow abortion up to the moment of birth for virtually any reason. In Virginia, Governor Ralph Northam (D) endorsed infanticide during a radio interview, again under the guise of feminism.

“I cannot imagine, whether you pro-life like I am, or you are pro-choice like others, that this would even be an issue of debate or discussion within the two sides. There is no side on this topic. There cannot be a side about life separated from the mother, whether or not that life should continue to live. This is common sense. This is human decency. This is not an issue of being pro-life, or pro-choice, this is being pro-child, which we all should be,” he continued.

“There is nothing to debate regarding the sanctity of born children,” Scott said, adding, “We’ve all come to the same conclusion, and that is that a child born deserves to live. This is a place of universal agreement.”

The Born-Alive Abortion Survivors Protection Act would “prohibit a health care practitioner from failing to exercise the proper degree of care in the case of a child who survives an abortion or attempted abortion.”

There is no doubt that abortion is a Civil Rights issue. And just like back in the day when Democrats sided against equality for African-Americans, the left is repeating their same error in judgement, only it isn’t a particular race who is being attacked, but all of humanity in its most innocent and defenseless form.

We must not allow folks to have the right to murder their children inside or outside of the womb. If we let this happen, where does the madness stop? How long before other kinds of murder become justifiable? The slippery slope is real.