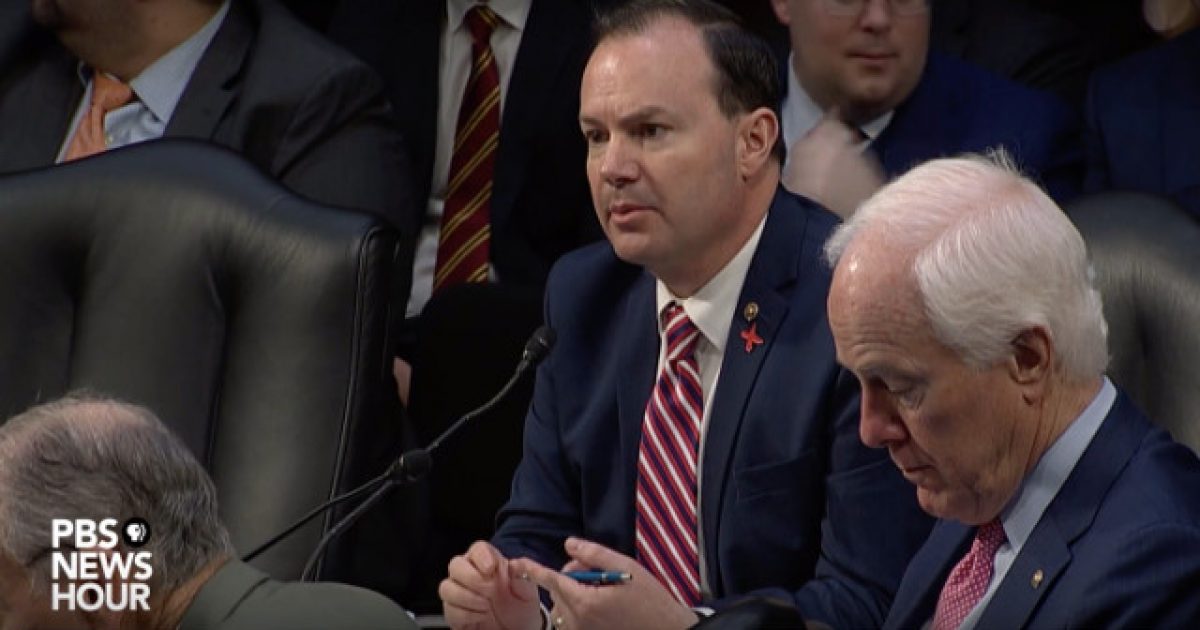 Sen. Mike Lee decided to hold nothing back when putting Senate Judiciary Democrats on blast for asking judicial nominees about their individual religious beliefs.

He confronted Sen. Mazie Hirono in a no-holds-barred, in-your-face manner that left her huffing and puffing, clearly perturbed by his bluntness, saying, “I do not sit here to be questioned about my motives.”

Well before his confrontation with Hirono, Lee eloquently stated his opposition to querying judicial nominees about their religious beliefs:

I think it’s important to point out here: You can’t openly, publicly question a nominee about that nominee’s religious beliefs, about what he or she believes to be sinful conduct without subjecting that nominee to ridicule and simultaneously demeaning some of the fundamental tenets of our constitutional republic. You can’t ask a nominee questions like those to which Neomi Rao was subjected just the other day and those that I’ve seen asked of some of our other nominees and then later ask the question, “How did we get here?”

Anyone who believes in the God of Abraham, Isaac, and Jacob, or any other god, for that matter, if asked by this committee or any other publicly about his or her religious beliefs, is being subjected, potentially, to public scorn and ridicule. For example, from any sect of Christianity or Judaism, that means that you believe in a God who delivered stone tablets to Moses. If you publicly cross-examine someone on the basis of those religious beliefs, in a secular context, where we’re talking about secular beliefs, you are inevitably exposing that person to ridicule, especially when you consider that there are a lot of specific beliefs that require a more nuanced answer than a simple yes or no when you’re asking about the existence or lack thereof of a sin.

I can’t fathom a circumstance in which it’s ever appropriate for us to ask a nominee about his or her religious beliefs about whether x, y or z is a sin, with the possible exception of a circumstance in which you’re trying to ascertain whether that nominee might need to recuse him or herself, in the case of a judicial nominee in the event that the nominee’s church or synagogue or other faith community were involved in litigation. But that’s a fairly narrow, very specific question.

Beyond that, I think that it’s wildly inappropriate and it’s something that I hope and respectfully implore my colleagues of both political parties to avoid in the future. As a religious minority myself, as the descendant of a group of religious minorities who were ordered exterminated by the governor of Missouri on October 27, 1837, I urge you to consider the fact that , we should never expose someone to shame, ridicule or scorn on the basis of their religious beliefs and I ask that we refrain from doing so in this committee. We should never again ask someone what they regard as a sin or other particulars of their religious beliefs. It’s nobody’s darn business. It’s certainly not the business of this committee.

Very eloquently stated, right? Later on came his direct confrontation with Hirono, where he stood up boldly for the First Amendment rights of these judicial nominees, defending their right to their religious beliefs.

The problem with asking a nominee about the particulars of his or her religious beliefs is that those questions inevitably expose those beliefs as somehow a qualifier or a disqualifier for public office. That is flatly inconsistent with at least the letter, at least the spirit if not also the letter, of at least two provisions of the Constitution. I cannot fathom why this would ever make sense to do.

There was a time in this country when people might have been asked in a job interview context, or in the context of a hearing, like those we hold here, whether someone believed in God, whether they were Christian. When they might have been asked those it was not for a good reason, because there is never a good reason in a public setting to ask that question, save perhaps, if you just want to make sure that that person’s religious beliefs do not require that person to betray the judicial oath. Beyond that, I can’t fathom a circumstance in which that would be appropriate.

It’s rare to see Lee get upset about anything, as he’s usually calm and cool under pressure, but he visibly becomes disturbed by Sen. Hirono’s behavior and isn’t shy about stating so.

“So I would ask Senator Hirono, in what circumstance, in what way, shape, or form is asking Neomi Rao whether she believes particular conduct to be sinful an appropriate question to be asked in this committee. Ever.”

Hirono, who had questioned Brian Buescher, President Trump’s nominee for an open U.S. Federal District Court position, as to whether he intended to end his membership with the Knights of Columbus, a Catholic organization, got defensive, replying, “These probing questions — if you were to list all of the questions that we ask, they have to do with whether or not these nominees’ very strongly-held religious views, as well as any other views that may not enable them to be objective as judges in lifetime positions, I think that’s a legitimate area of inquiry. And it is not that we all ask, “Do you think such and such is a sin, et cetera, et cetera —”

Lee interrupted, “That was asked then. This week. This week it was asked. I’m not making this up.”

Hirono, a little flustered: “I know that …” She huffed, “I don’t think we are here to censure the motives of each other’s questions, and I ask, I ask all of us to be very cognizant of the fact that we are here to try and do our jobs to the best of our ability and that is what we are doing.”

Then she got even more huffy: “I do not sit here to be questioned about my motives as to the kind of questions that I seek answers to because what I want to make sure is that these nominees, 80% of them, who are pretty much Federalist Society and Heritage Foundation nominees, whether they can set aside — I don’t care what kind of religious views they have. Good. I just want to make sure those views and other views they hold about LGBTQ rights, about all of these other issues that come before us, that they can set aside their ideological views so they can objectively decide cases. “

She went on to say that she doesn’t care what religious beliefs these individuals hold. If that’s the case, then why all of the questions to begin with?

Obviously, what a person believes, the worldview they hold, will impact and effect how they think about certain issues. This is absolutely true for liberals just as it is for conservatives.

Can a liberal judge objectively make decisions on cases without the influence of progressive thought? No. That’s why they rule the way they do.

The question isn’t what a person believes, but whether or not those beliefs are valid, objective truth? That’s a question the left is unwilling to engage in because the answer will leave their worldview in shambles.

Good for Sen. Lee for being salt and light in a world that’s in sore need of preservation.