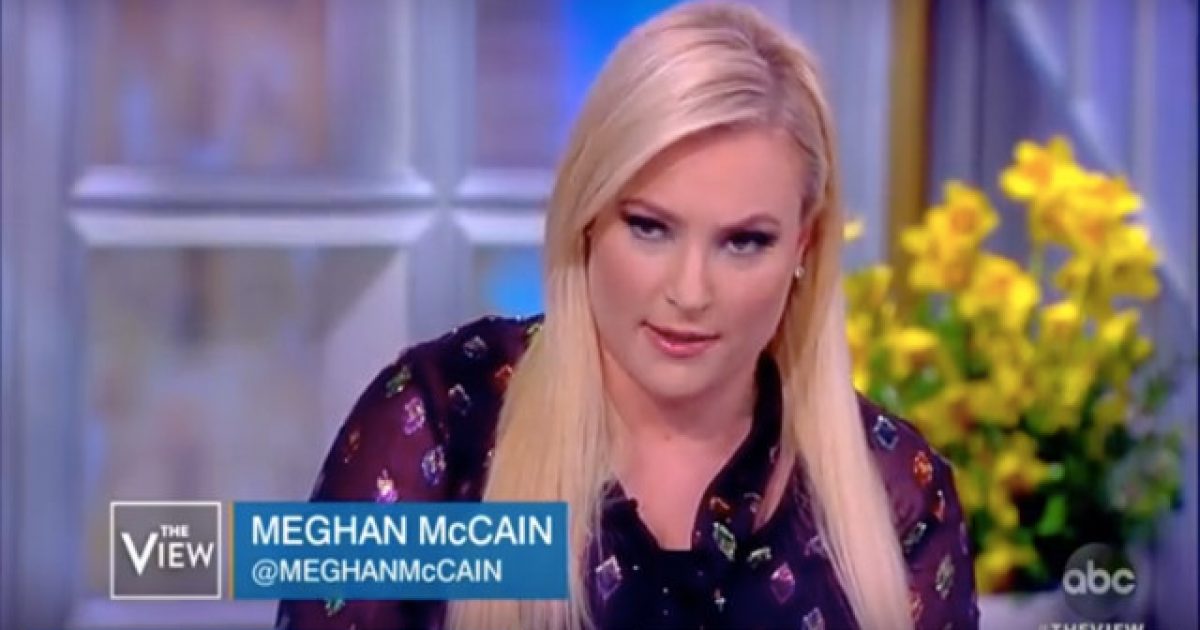 On Tuesday’s episode of the left’s favorite major cable talk show, “The View,” daughter of the late Sen. John McCain, Meghan, ripped her fellow co-hosts to shreds after they voiced their support for infanticide, the murder of children survivors of botched or failed abortions.

They deserve all she gives them and then some.

McCain acquainted “The View” audience with the bill and highlighted that all Senate Democrats, save three, voted to block the bill. “So that means these Democrats believe that a baby born, after a botched abortion, should not receive medical care,” she said.

“If Democrats want to win an election, going forward, are you going to be the party of late-term abortion? The party of infanticide?” McCain asked, later adding: “If you think that is how you win back the White House, I’m here to tell you I’ve spent a lot of time in red states. I’m from a red state, and that is a losing argument.”

Co-host Sonny Hostin, who calls herself pro-life, told McCain she had to “push back” on her comments.

“I thought that you were pro-life like me?” McCain asked Hostin.

McCain answered in disbelief, “So you think a baby born from a botched abortion should be put down like a dog or a cat?”

Hostin argued that born-alive survivors of abortion are “truly rare” and that the bill didn’t need to be passed because such protections are already in place. As noted by McCain, if this were the case, and the opposition to the bill had nothing to do with a “woman’s right to choose,” then why wouldn’t Democrats just go on record against infanticide? Hostin stuck to her talking points elaborated on a sheet of paper she was reading from and suggested the bill, if passed, would somehow make it more dangerous for babies in question to be sent to hospitals.

“In terms of the bill that the Senate Dems blocked yesterday, my understanding is that the reason that it was blocked is because the Dems felt there wasn’t a need for a new law,” contended Hostin, according to The Blaze. “Under the bill that was proposed, it required that all babies born alive be immediately transferred to a hospital, and that is not always safe for a newborn.”

Hostin continued to play defense for Democrats: “It’s already required to provide medical care to infants born alive. This bill also required that all babies born alive be immediately transferred to a hospital, which, my understanding is, it’s not always safe for a newborn. And passing this bill would impose legal and criminal penalties on doctors who won’t comply with that,” she said.

“Pro-life women know what I’m talking about,” McCain said, looking at the audience. “If the Democratic Party wants to be the party of infanticide, that is their choice.”

How sickening and sad is it that women, many of whom are mothers themselves, would support the murder of a child who survivors the abortion procedure?

Life is a sacred gift. To murder innocent life inside or outside the womb is to invite the judgment of God. As our Founding Fathers wisely noted not so long ago, freedom is for a moral people, and the most basic set of moral standards we have is the law of God in the Ten Commandments.

One such commandment is “You shall not murder.” That used to be something we could all agree on, but perhaps that notion is just a little too old fashioned for modern society.