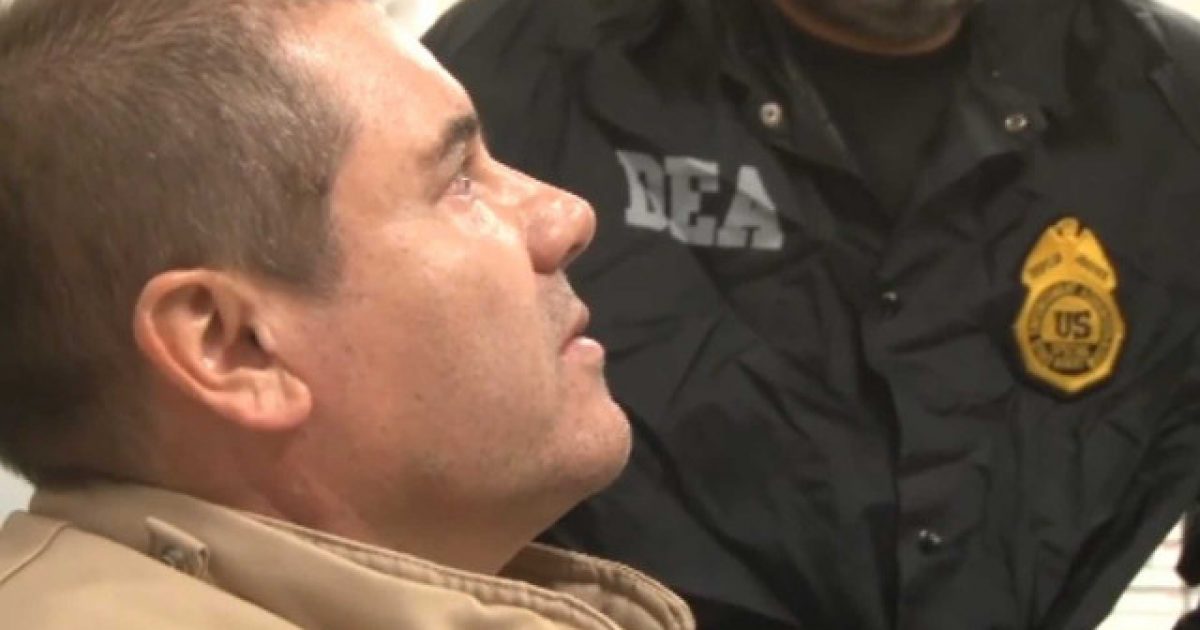 Notorious drug lord, Joaquin Guzman Loera — AKA, El Chapo — was found guilty on all charges Tuesday, which apparently has only been the beginning of his bad week.

The federal government has released footage of El Chapo arriving in New York City, tears in his eyes, looking scared for his life.

As the saying goes, you reap what you sow.

The video was taken on Jan. 16, 2017, when the drug kingpin first arrived in New York City, where he would eventually be tried, but only released by the U.S. government and published by New York’s PIX11 after the jury’s verdict Tuesday.

The video begins with El Chapo on the plane, staring wide-eyed out the window. He is then escorted off the plane, appearing shaky and uncertain as he makes his way down to the tarmac. Authorities then escort him into a hangar at MacArthur Airport on Long Island, PIX11 reports.

While in the hangar, the camera repeatedly zooms in on Guzman’s face, revealing his watery eyes and stunned expression.

“His appearance in the video is a far cry from the ruthless drug lord who was talked about during a nearly three-month trial,” the outlet reports. “Fifty-six witnesses testified, one of them telling the jury he saw an El Chapo rival being tortured, before being buried alive. Another spoke of watching El Chapo shoot two other opponents in the head.”

After agents communicate with him, he is escorted to a black SUV, which reportedly transported him to Manhattan’s Metropolitan Correctional Center. Video below (via PIX 11):

The drug lord has escaped prison twice in the past, but that doesn’t look likely to happen a third time. Though we should never underestimate the mental prowess of someone as evil and wicked as El Chapo.

During the eleven total weeks of trial, jurors heard a number of disturbing stories, including grisly murders, political payoffs, naked escapes through tunnels, cocaine in jalapeño cans, and more.

At the end of the day, the point being made here is that you can’t escape the consequences of your actions forever. Sure, some folks might get away with murder in this life, but they most certainly won’t in the next.

All will stand before the righteous throne of God and give an account for their sinful ways. Only those who have the righteousness of Christ by faith will be declared not guilty and enter paradise.

In other words, things aren’t looking good for El Chapo.