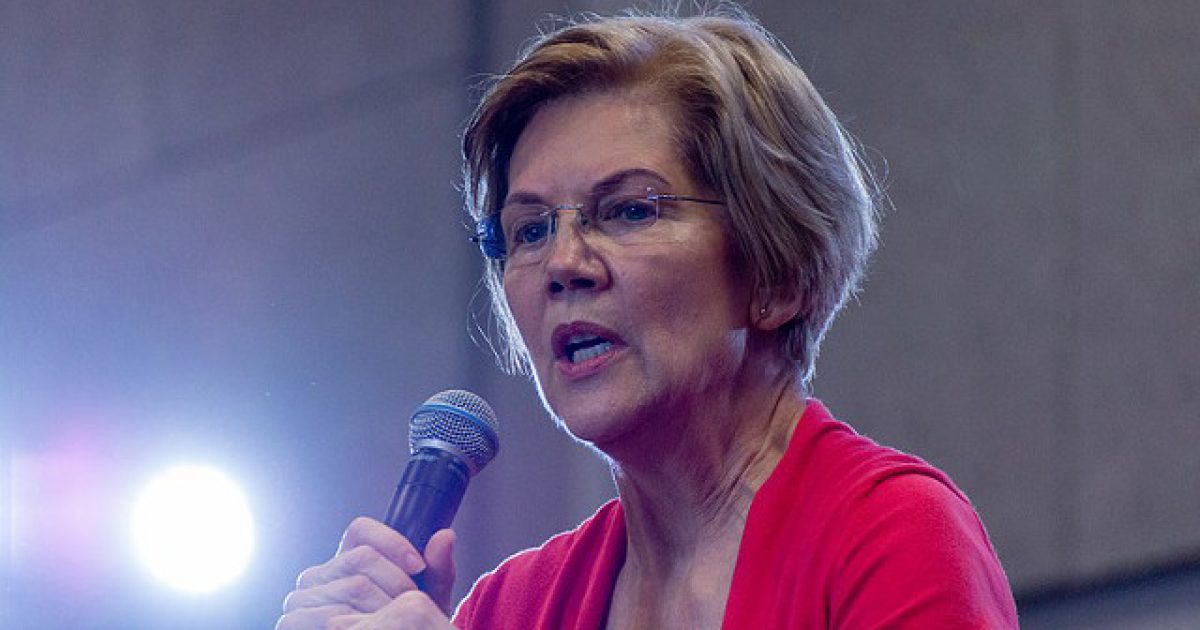 Over the weekend, everyone’s favorite non-Native American, Democratic Sen. Elizabeth Warren officially launched her presidential campaign for 2020, rolling out her very own version of the anti-Hillary “Lock Her Up,” only aimed at President Trump.

Her announcement event drew a tiny, but apparently enthusiastic crowd who simply lapped up her rhetoric.

“Every day, there is a racist tweet, a hateful tweet — something really dark and ugly,” Warren said at a rather “intimate” campaign event in Cedar Rapids, Iowa Sunday. “And what are we as candidates, as activists, as the press, going to do about that? Are we going to chase after those every day? Are we going to let him use those to divide us?”

Then the senator — who was hit with more revelations about her past claims to being an “American Indian” last week — got to her less concise iteration of Trump’s famous “Lock Her Up!” chant that became a regular feature of his 2016 rallies, but this time directed back at the president.

Those gathered at the Cedar Rapids event loved it, responding in loud cheers and applause.

She went on to say that Trump “is not the only problem we’ve got,” describing him as “the symptom of a badly broken system.”

This is how Elizabeth Warren opened up her “first full day” of her presidential campaign: “By the time we get to 2020, Donald Trump may not even be president. In fact, he may not even be a free person. But here’s how I see it–Donald Trump is not the only problem we’ve got.” pic.twitter.com/hhzFiKdaC5

How often have we all been bombarded with how the Republican Party is the party of “crusty old white dudes?” Probably more times than we can count, yet, strangely, when you look at the demographics for the crowd who came out to see Warren, they look eerily similar to the GOP’s target audience.

Yes, the crowd was mostly comprised of older white folks, something the mainstream media didn’t seem particularly excited to point out.

In her announcement speech Saturday, Warren established the theme of her campaign: America is “rigged” against the middle class, lower classes, minorities — everybody but the 1%.

“Over the years, America’s middle class has been deliberately hollowed out, and families of color have been systematically discriminated against and denied their chance to build some security,” she said (transcript via Frank Camp). “Now, it started very quietly. The richest and most powerful people in America, they were rich — I mean really rich – but they wanted to be even richer and they didn’t care who got hurt. So, every year, bit by bit, they lobbied Washington and paid off politicians to tilt the system just a little more in their direction. And year by year, bit by bit, more of the wealth and opportunity went to the people at the very top. And that is how today, in the richest country in the history of the world, tens of millions of a people are struggling to get by.”

“The middle class squeeze is real and millions of families can barely breathe,” she added later.

If Democrats choose this woman for their presidential candidate, they will experience an even greater defeat than they did when Hillary was running.

They would be wise to choose someone who isn’t already out of touch with the average American citizen and doesn’t have the baggage of the whole DNA thing hanging over their head.

As we’ve seen, such material is low hanging fruit for Trump and will energize his base to come out in record numbers to support him against her.

It’s shaping up to be an interesting election year.