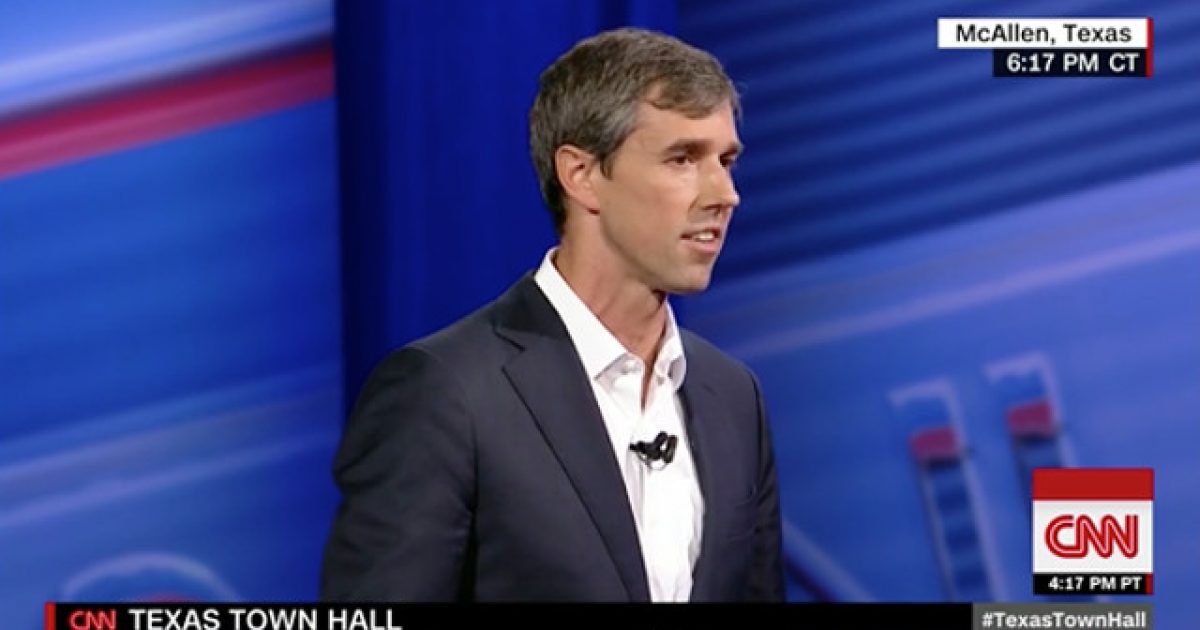 Failed senatorial candidate Beto O’Rourke stated on Thursday that not only is he totally against the idea of Trump building a wall, but he wants to yank down the bits and pieces of the wall that already exists.

When he explained his thinking behind this egregiously stupid position, he accidentally helped the case made by conservatives for building a structure at the border.

O’Rourke was asked by MSNBC’s Chris Hayes, “If you could, would you take the wall down now? Knock it down?”

As Hayes made clear, the question was prompted by a post by Texas Republican Congressman Dan Crenshaw directed at O’Rourke pointing out the effectiveness of border fences: “[Beto O’Rourke] should answer a simple question tonight with respect to the border debate: If you could snap your fingers and make El Paso’s border wall disappear, would you?” wrote Crenshaw, adding: “Because this DHS graph shows that when the wall was built, illegal crossings dropped significantly.”

.@BetoORourke should answer a simple question tonight with respect to the border debate:

If you could snap your fingers and make El Paso’s border wall disappear, would you?

Because this DHS graph shows that when the wall was built, illegal crossings dropped significantly. pic.twitter.com/JgquXfw2Ee

O​’Rourke happily took the bait, replying, “Yes, absolutely,” in response to Hayes’ question about taking the walls down. Asked if he thinks a referendum to knock down the existing wall would pass in El Paso, O’Rourke said, “I do.”

Beto then provided his rationale for dismantling all existing border walls: “Here’s what we know: After the Secure Fence Act, we had built 600 miles of wall and fencing on a 2,000-mile border. What that has done is not in any demonstrable way made us safer. It’s cost us tens of billions of dollars to build and to maintain.”

If he had stopped there, he might’ve been okay; instead, he continued — and ended up accidentally making the case for those who argue that walls do in fact work: “And it has pushed migrants and asylum seekers and refugees to the most inhospitable, the most hostile stretches of the U.S.-Mexico border, ensuring their suffering and death.”

Basically, what he ended up saying was that a wall or fence actually does deter illegal border crossings, which is the exact opposite of what he wanted to do during his little spiel.

In which he says existing walls and fences have forced illegals toward the most dangerous places to cross, which means they are indeed a deterrent. His sympathies as expressed here are entirely with those crossing illegally. He clearly wants to make it easier for them. https://t.co/QiiZWmqd8G

“More than 4,000 human beings — little kids, women and children — have died,” O’Rourke continued. “They’re not in cages, they’re not locked up, they’re not separate — they’re dead, over the last ten years, as we have walled off their opportunity to legally petition for asylum, to cross in urban centers, like El Paso — to be with family, to work jobs, to do what any human being should have a right to be able to do.”

O’Rourke is showcasing why he failed so miserably in his senatorial race last year. The man is not only bonkers, but has no clue how to make a cogent argument using facts to support his position.

At the end of the day, America needs a wall just like a person’s private property needs a fence. It’s the same principle applied a bit more broadly. Anything that helps America become safer is worth the investment.