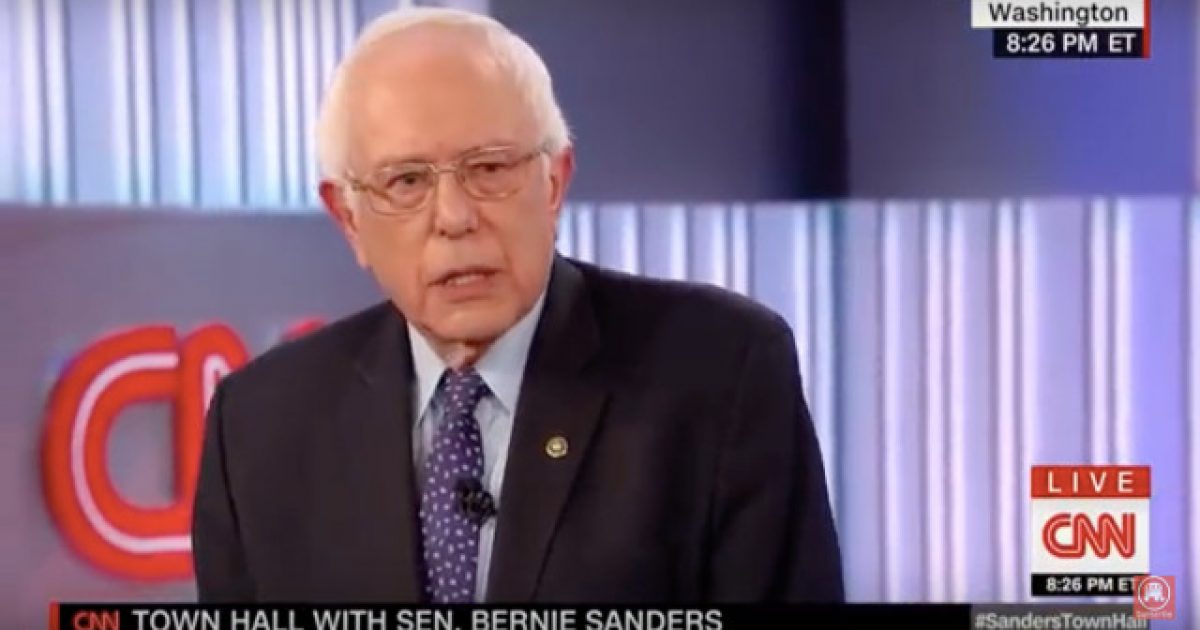 Democratic socialist Sen. Bernie Sanders is once again running for president, which means he’s beginning the long slog on the campaign trail which counts down to November 2020, starting with a CNN town hall event that was surprisingly revealing.

During this event, Sanders refused to call Venezuelan — and socialist — Nicolas Maduro a dictator, citing the country still had “democratic operations taking place.”

He also refused to promise that America wouldn’t become a socialist country.

“Senator, why have you stopped short of calling Maduro of Venezuela a dictator?” CNN’s Wolf Blitzer asked.

“Well, he, I think it’s fair to say that the last election was undemocratic,” Sanders responded. “But there are still democratic operations taking place in their country. The point is, what I am calling for right now is internationally supervised free elections.”

Sanders then sought to deflect from the question by attacking President Donald Trump and Saudi Arabia.

“And I do find it interesting that Trump is very concerned about what goes on in Venezuela but what about the last election that took place in Saudi Arabia,” Sanders continued. “Oh, there wasn’t any election in Saudi Arabia, oh, women are treated as third class citizens. So I find it interesting that Trump is kind of selective as to where he is concerned about democracy. My record is to be concerned about democracy all over the world. So we’ve got to do everything we can, but at the end of the day, it’s going to be the people of Venezuela who determine the future of their country, not the United States of America.”

“Senator, President Trump said in a State of the Union address, and I am quoting him now, this is the president, ‘America will never be a socialist country,’” Blitzer said. “Will that hold true if you’re elected president?”

“If I am elected president, we will have a nation in which all people have health care as a right, Sanders responded. “Whether Trump likes it or not. We are going to make public colleges and universitiestuition-free. We are going to raise the minimum wage to a living wage of at least 15 bucks an hour, and whether Trump likes it or not, when I talk about human rights, you know what that also means, it means that our kids and grandchildren have the human right to grow up in a planet that is healthy and habitable.”

“And it is really a disgrace and an embarrassment that we have a president who rejects science, who does not even understand that climate change is real and caused by human activity, who does not understand what this planet will look like in years to come if we do not go forward boldly and transform our energy system away from fossil fuels,” Sanders added.

Well, the one thing we can say about good ole Bernie here is that he’s not really hiding his true intentions of wanting to transform America into a socialist nightmare, unlike Barack Obama who attempted to keep his true plans undercover.

We cannot allow this man to become president. Many of the freedoms we hold dear hang in the balance, and if we want our nation to thrive for future generations, we must combat socialism on every front.

This includes engaging our culture and creating high quality entertainment to help promote our worldview through solid storytelling.

Politics flows downstream from culture. Change culture, change politics. That’s the only way to stop the wave of socialism coming to the forefront of our political arena through Sanders and Ocasio-Cortez.