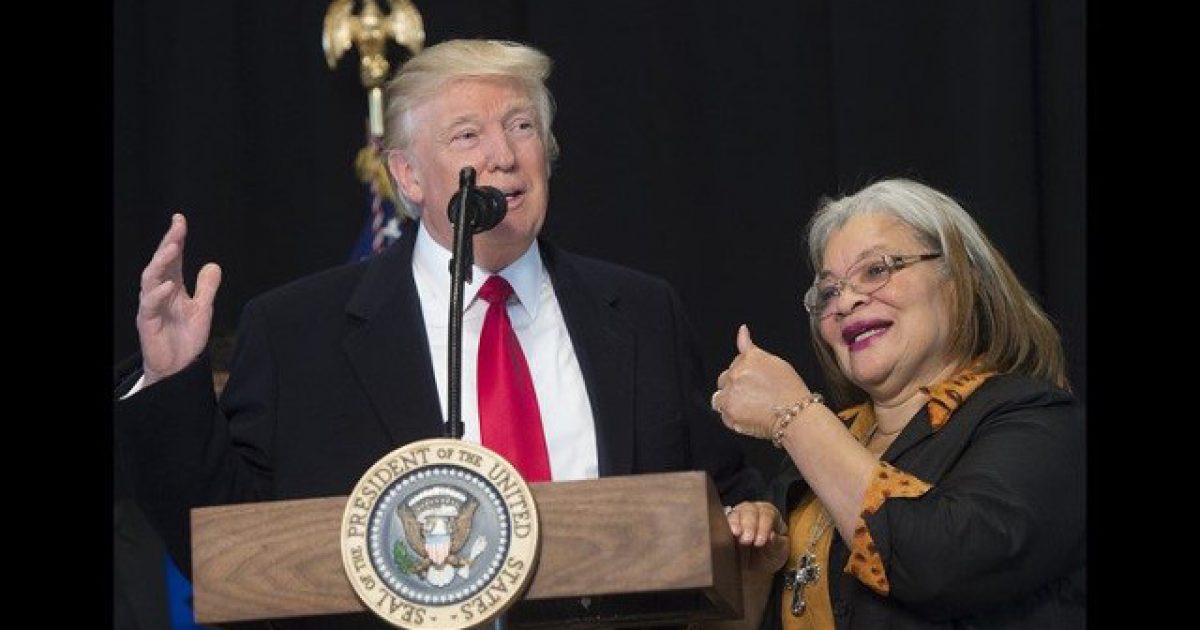 On Thursday, President Trump sat down with pro-life advocate Alveda King, niece of the late great Dr. Martin Luther King Jr. and a late-term abortion survivor to talk about defending the sanctity of life for our most vulnerable citizens.

Just last week, during his State of the Union address, Trump spent some time defending the right to life for the unborn, so that, along with this meeting, seems to indicate that pro-life issues are going to be a bigger topic of discussion for the president.

According to LifeNews, in concert with meeting King, the president also met with “abortion survivor Melissa Ohden and Micah Pickering, the six-year-old son of a pro-life former congressman who was born very prematurely but survived and is doing well.”

King added that the president reiterated his support for adoption over abortion, saying that New York’s late-term abortion law strengthened his position.

“Considering the huge fiascoes and lies about abortion being a reproductive right, with New York and Virginia endorsing infanticide, President Trump’s adoption response today is yet another sanctity of life gain,” she said. “Let’s do something different today. Let’s pray for America, and join President Trump in his compassion for the least of these exemplified in his speech today. Let’s choose adoption as an option to abortion. Let’s insist that our elected officials vote no on infanticide.”

The president later spoke on a national pro-life conference call with “hundreds of top pro-life advocates around the country.” During the call, the president reportedly thanked pro-life leaders, pastors, and families for their hard work protecting the unborn.

Melissa Ohden, one of the women present at the meeting, survived a late-term abortion when her mother was seventh months pregnant with her. Speaking with the Daily Caller earlier this month, Ohden blasted Virginia Gov. Ralph Northam for openly defending infanticide.

“I wake up every single day living with the fact that people somehow want to pass this kind of legislation that would have ended my life,” she told the outlet. “People can very nonchalantly talk about this or try to be ambiguous, but there is no ambiguity that exists. My life should have been ended by an abortion, and every day children are losing their lives.”

“Let’s just use the word infanticide, because that’s what it is,” Ohden continued. “In my case, I know there were nurses on the staff of that hospital who fought for me. I could have been left to die … I know that children like me were actually placed in a utility closet in buckets of formaldehyde and left to die, and I know that because I’ve talked to the nurses who were responsible for it.”

This is just more positive proof that abortion is the civil rights issue of our modern era, which is why it’s so awesome to see Alveda King involved in the cause, fighting for the right of the unborn to live.

It’s sad that murdering children, inside and outside the womb, is something we as a society are actually discussing, as if such action actually has some sort of moral value and worth.

When a nation takes such a severe turn, when a people are willing to sacrifice the lives of their most vulnerable citizens for the sake of convenience, it’s safe to say that judgment, directly from the hand of God, is not too far behind.

In fact, we might already be getting a taste of it. Regardless, there’s been no better time to be pro-life. Let’s continue the good fight, speaking boldly against the murder of children and give a voice to the voiceless.