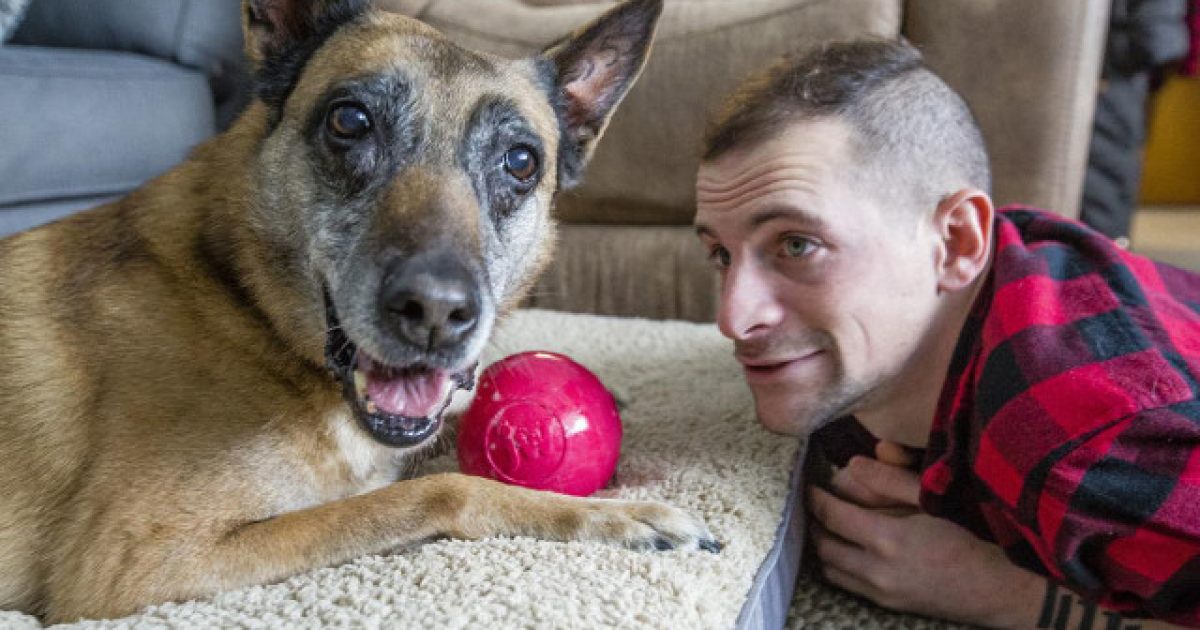 There’s nothing quite like the bond between a service dog and it’s human partner, especially when that relationship was forged on the battle field, defending the freedom we all enjoy on a daily basis.

Veteran Joe Steenbeke was separated from his service dog Tess, a bomb-sniffing canine, for six years after being deployed in Afghanistan. Well, they’ve finally been reunited with each other and the love couldn’t be sweeter.

It had been less than 24 hours since the recently retired military dog had set foot inside her new home in Culver. She had already made herself at home, found a new favorite toy and acknowledged, then promptly ignored, Onyx, the black cat who lay lazily in a chair a few feet away.

“She’s all about having toys,” Steenbeke said, smiling down at the dog he had spent years trying to reunite with.

A U.S. Army veteran, Steenbeke served nearly a year in Afghanistan as a Tactical Explosive Detective Dog (TEDD) handler. Every minute of that deployment, Tess was at his side, sniffing out bombs and serving as emotional support for her handler.

When he was returning home from deployment, in February of 2013, Steenbeke was given only minutes to say goodbye to his partner. Tess went on to serve with the Connecticut National Guard until her retirement last week.

Now, after years of hoping and wondering, and a mountain of paperwork, along with help from his family, friends, nonprofits, and U.S. Rep. Jackie Walorski, Steenbeke is finally able to offer his friend a new forever home.

“It’s been six years since I’ve had her and honestly, looking at her right now, it feels like it’s been a lifetime, but it also feels like it was just yesterday that I said goodbye to her,” he said. “I know that she’s going to be in a great home that loves her from now until forever. I’m just happy to have her back.”

Despite a little gray in her muzzle, Steenbeke said said she’s still pretty much the same pup he remembered all those years ago, noting that she loves to chew on his thumbs and actually destroyed four tennis balls on the way home.

Joe’s wife, Stephanie, was an integral part of getting Tess home, stating that she has heard countless stories about the pup ever since the couple started dating.

“I’d heard plenty of stories about her but as soon as they brought her out … as soon as I saw her I started crying and she just came right to him,” Stephanie said. “Just beelined right to him. Honestly, it’s like she’s always been with us. She came right in the house last night, she picked out a toy, she picked a bed and she slept all night. It’s like she’s been here forever. She’s just fit right in.”

Tess has had a life altering impact on Joe since she’s been brought home. Joe suffers from PTSD and his wife said that since the dog has been reunited with him, he’s slept much better.

The love between a dog and a human is a special thing, and it’s so good to see this wonderful man who served his country bravely, get rewarded by being able to have his companion with him.

Be sure to thank the veterans in your life for their sacrifice and service.