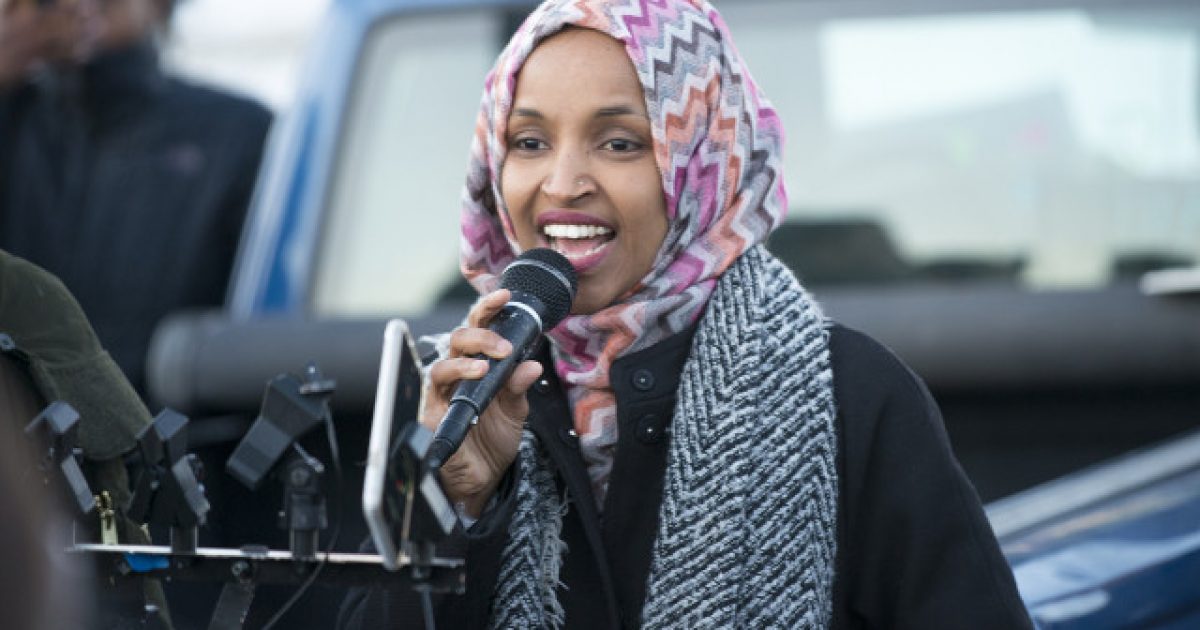 Rep. Ilhan Omar, a woman who has become notorious for her anti-Semitism, went off the deep end in a shrill display of venom and attitude aimed at a CNN reporter.

Omar has come increasingly under fire from individuals on both sides of the aisle for her anti-Jewish rhetoric on social media, something which is apparently not sitting well with her. Guess the truth really does hurt.

CNN’s Manu Raju — who has arguably done the best job of tracking down Omar and asking her tough questions — approached her and asked her about President Donald Trump’s call for her to resign from Congress.

Omar ran behind a door to avoid the question, only responding: “No, thank you.”

Raju later tried to question Omar over her response to President Trump, when she tweeted: “Hi @realDonaldTrump, You have trafficked in hate your whole life—against Jews, Muslims, Indigenous, immigrants, black people and more. I learned from people impacted by my words. When will you?”

You have trafficked in hate your whole life—against Jews, Muslims, Indigenous, immigrants, black people and more. I learned from people impacted by my words. When will you? https://t.co/EqqTyjkiNE

Are you serious?” Omar asked. “What is wrong with you?”

“I’m asking you a question about your tweet … saying the president trafficked in hate,” Raju replied.

“Yes, I tweeted, and there’s a response,” Omar fired back. “You can run that. Have a nice day.”

How Ilhan Omar is dealing with the aftermath of her controversial remarks, as Pelosi says she won’t be stripped from committee spots, Engel declines to comment, and Omar says: “What’s wrong with you?” when asked about her morning tweet on Trump. pic.twitter.com/yPdEq3D7N2

“Rep. Ilhan Omar in no mood to talk about her controversies this week,” Raju said. “First, she said: ‘No thank you’ when asked to comment on Trump saying she should resign. Second time I saw her, she yelled: ‘Are you serious?’ when I tried to question her.”

“Asked about her tweet this AM attacking Trump for trafficking in hate, she angrily said: ‘Yes I tweeted, and there’s a response,'” Raju continued. “‘You can run that. Have a nice day.’ And she walked into a meeting.”

Asked about her tweet this AM attacking Trump for trafficking in hate, she angrily said: “Yes I tweeted, and there’s a response. You can run that. Have a nice day.” And she walked into a meeting

Anti-Semitic Rep. Ilhan Omar (D-MN) runs from CNN when they ask her why she supports anti-Semitic Boycott, Divestment, and Sanctions campaigns against Israel. pic.twitter.com/ovCNA6OxKG

It certainly seems like Omar is doing her best to avoid the tough questions, working tirelessly to prevent herself from admitting openly what we already know about her. She’s an anti-Semite.

Omar likely knows that owning up to this would be the end of her political career before it even really began, thus why she’s desperately trying to stay clear of any questions that might force her to be intellectually honest.

Shameful she even got elected.