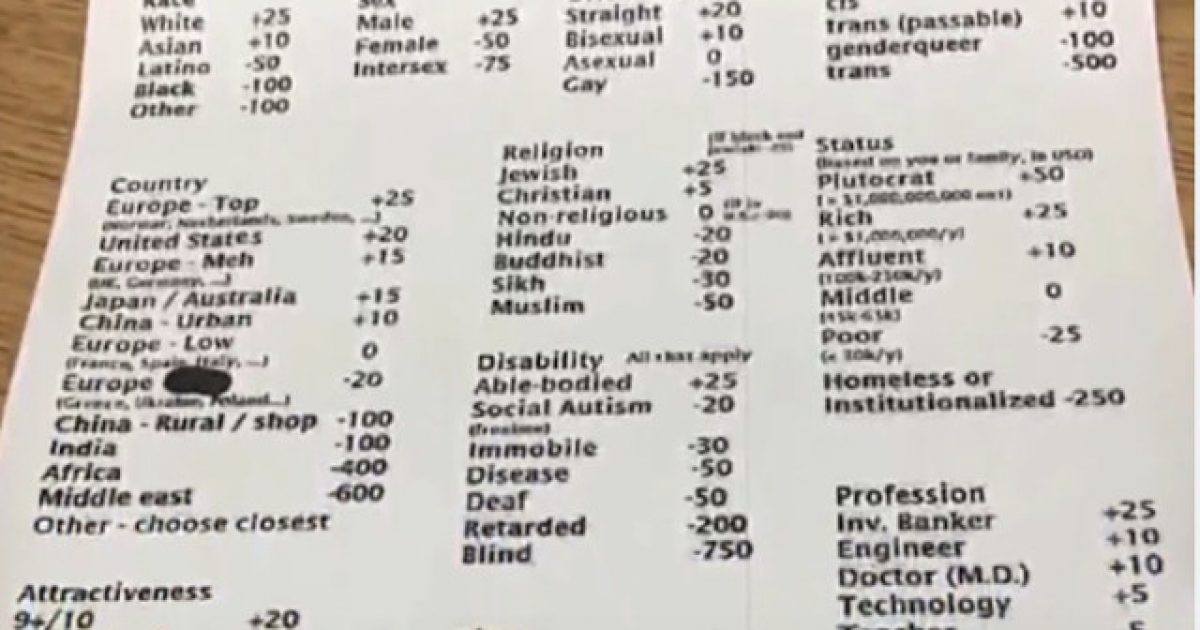 A public high school in New York recently handed students in one class a “privilege reflection form” thats stirring up quite a bit of controversy, and when you get a good look at it, you’ll understand why.

The form also included outdated and offensive words and point assignments that appeared to play on cultural stereotypes, the paper said. One example: Jewish was rated the most privileged religion — earning such students 25 points — but Christian students earned just 5 points, and if you’re Muslim? A whopping 50 points off, the Daily Gazette said.

In the “gender” section of the form, students receive 20 points of they are “cis” and 10 points if they’re “trans (passable.” However if they are “genderqueer” they lose 100 points. Those who are “trans” lose 500 points.

This thing even features an attractiveness category. If students rate themselves as a “9+/10” they get 20 points. However, if they happen to be a bit on the chubby side, they lose 10 points. If they have an unattractive face, that’s 20 points off and 40 are deducted for being “disfigured.”

“It’s emotional abuse,” one poster wrote, the paper said. “Students are either made to feel guilt for being white, or made to feel like victims based on the negative score associated.”

Parent Michelle King — who said her daughter was given the form — told WTEN it’s out of line.

“It’s not acceptable. It’s inappropriate. It’s inexcusable to be even introduced into a classroom,” King said.

Although one Facebook user wrote, “It should make Saratoga school students uncomfortable. It is a wake up call that not everyone has equal access,” the Daily Gazette reported.

The Saratoga Springs School District stated, “An unmodified version of the privilege reflection form was distributed to students without the removal of insensitive words. The District does not condone the use of the document with these insensitive words,” the station said.

A school district spokeswoman told the paper that district officials would consider the assignment appropriate if the insensitive words were removed, the paper added.

If you’re still under the impression that public school education is neutral, you’re obviously mistaken as this worksheet clearly points out.

The whole point of this is to further normalize deviant behavior like transgenderism and homosexuality. It’s just another tool used by the left to brainwash kids into becoming loyal statists, attempting to prove to them that government is the only true arbiter of right and wrong.

The government is the arm of justice and fairness in the liberal worldview, and in order for them to obtain and keep massive amounts of power, they have to convince whole generations of people they can’t think for themselves or solve their own problems. The nanny state must do it for them.

It’s a scary world our children are inheriting.