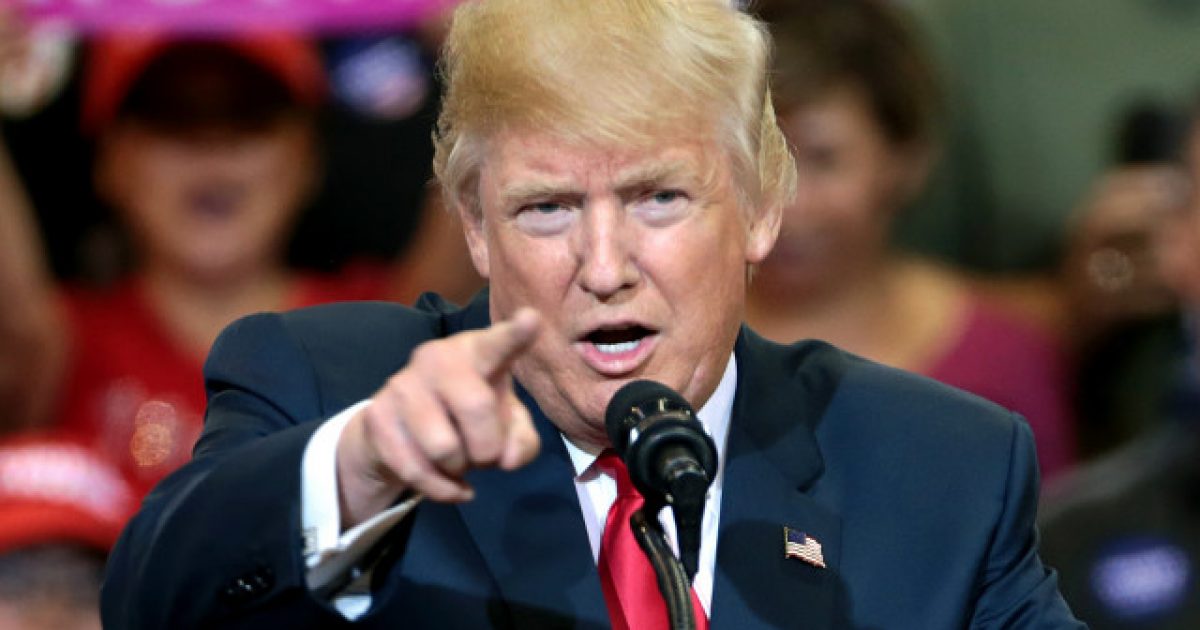 President Trump delivered one of the most furious lashings against Democrats on Monday evening after they refused to support a bill in Congress that would prevent the murder of newborn children if they were born alive after a failed abortion.

This whole thing might just make Trump one of the most pro-life presidents to sit in the White House. It’s wonderful to see him take a stand for preserving the unborn.

“All but three Democrats voted against a procedural motion on the Born-Alive Abortion Survivors Protection Act, denying it the necessary 60 votes to proceed,” The Mercury News reported. “The final vote count was 53 in favor and 44 opposed.”

“Senate Democrats just voted against legislation to prevent the killing of newborn infant children,” Trump tweeted. “The Democrat position on abortion is now so extreme that they don’t mind executing babies AFTER birth.”

“This will be remembered as one of the most shocking votes in the history of Congress,” Trump continued. “If there is one thing we should all agree on, it’s protecting the lives of innocent babies.”

….This will be remembered as one of the most shocking votes in the history of Congress. If there is one thing we should all agree on, it’s protecting the lives of innocent babies.

The Mercury News added: “Senate Majority Leader Mitch McConnell, R-Ky., has sought to put Democrats – and 2020 candidates in particular – on the record on the issue after recent comments made by Virginia Gov. Ralph Northam of Democrats. McConnell also plans to hold a vote in the coming weeks on the Green New Deal climate-change legislation as he has cast the Democrats as extreme.”

Below are excerpts from the Born-Alive Abortion Survivors Protection Act (formatting adjusted):

To amend title 18, United States Code, to prohibit a health care practitioner from failing to exercise the proper degree of care in the case of a child who survives an abortion or attempted abortion. […]

To amend title 18, United States Code, to prohibit a health care practitioner from failing to exercise the proper degree of care in the case of a child who survives an abortion or attempted abortion. […]

(1) If an abortion results in the live birth of an infant, the infant is a legal person for all purposes under the laws of the United States, and entitled to all the protections of such laws.

“(2) INTENTIONAL KILLING OF CHILD BORN ALIVE.—Whoever intentionally performs or attempts to perform an overt act that kills a child born alive described under subsection (a), shall be punished as under section 1111 of this title for intentionally killing or attempting to kill a human being.

“(1) CIVIL ACTION BY A WOMAN ON WHOM AN ABORTION IS PERFORMED.—If a child is born alive and there is a violation of subsection (a), the woman upon whom the abortion was performed or attempted may, in a civil action against any person who committed the violation, obtain appropriate relief.

Every single life, from the moment of conception, is precious in the sight of God as one of His image bearers. Human beings, at any stage of development, have value and worth. To deny this, to equate humans with animals, is a grievous slight against our Creator.

Not to mention, if we’re all just animals, why is murder wrong? Or stealing? Or anything else? You can’t have laws to govern society if all we are is a bunch of wild animals without fur.

No, we are much more than that, which is what makes abortion so heinous and disturbing. This is why we fight against this awful evil, hoping for its complete abolition.

These Democrats are disgusting for their refusal to protect newborn babies. May God have mercy on them.