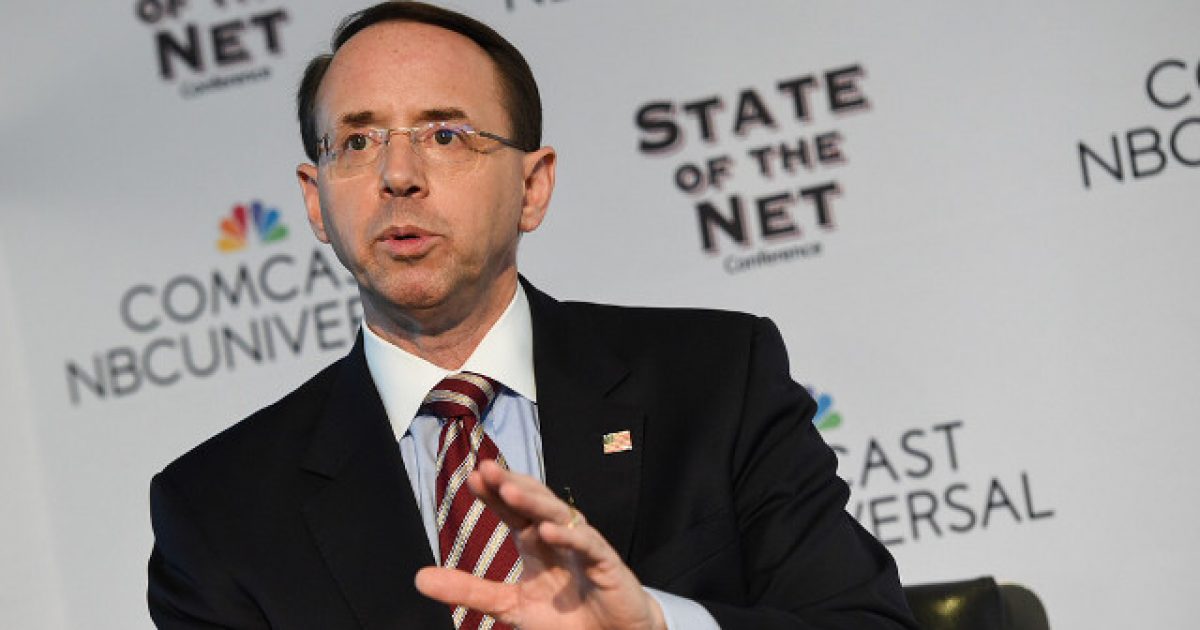 Deputy AG Rod Rosenstein is finally going to be kissing his career in public service goodbye. According to a new report he’s going to be leaving his role at the justice department sometime in mid-March.

There’s likely no one more thrilled by this news than President Trump, who could be announcing Rosenstein’s replacement as early as this week.

Time to break out the party hats!

A Trump administration official added that Attorney General William Barr has picked Jeffrey Rosen, who currently serves as Deputy Secretary of the U.S. Department of Transportation, to take over for Rosenstein.

A graduate of Northwestern University and Harvard Law School, Rosen previously served as General Counsel and Senior Policy Advisor for the White House Office of Management and Budget (2006 to 2009) and as General Counsel at the Department of Transportation (2003 to 2006), according to his online biography.

Rosen, confirmed for his current role by the Senate in May 2017, works under Transportation Secretary Elaine Chao in overseeing the daily operations of the department.

Fox News reported in January that Rosenstein was expected to step down in the coming weeks to ensure a smooth transition for Barr, who was sworn-in on Thursday.

Rosenstein long thought of his role as a two-year position and the two-year mark is coming soon, officials close to the departing attorney general previously told Fox News.

Speculation of Rosenstein’s departure mounted after the firing of former Attorney General Jeff Sessions in November. He has, until recently, overseen Special Counsel Robert Mueller’s probe into whether Russia meddled in the 2016 presidential election. Rosenstein has often been a target of President Trump on Twitter.

Most recently, Trump accused Rosenstein, along with former FBI Deputy Director Andrew McCabe, of pursuing an “illegal and treasonous” plot against him after McCabe detailed private DOJ discussions about secretly recording and potentially ousting the president.

Rosenstein has denied that he “pursued or authorized recording the president” and spoke out against former FBI Deputy Director Andrew McCabe’s claim that he had brought up the idea of using the 25th Amendment to convince Cabinet members to remove the president if they believe he is mentally unfit to fulfill the role.

It seems this is more purging of the swamp, something that’s desperately needed to happen for awhile now, but is especially important with the election next year.