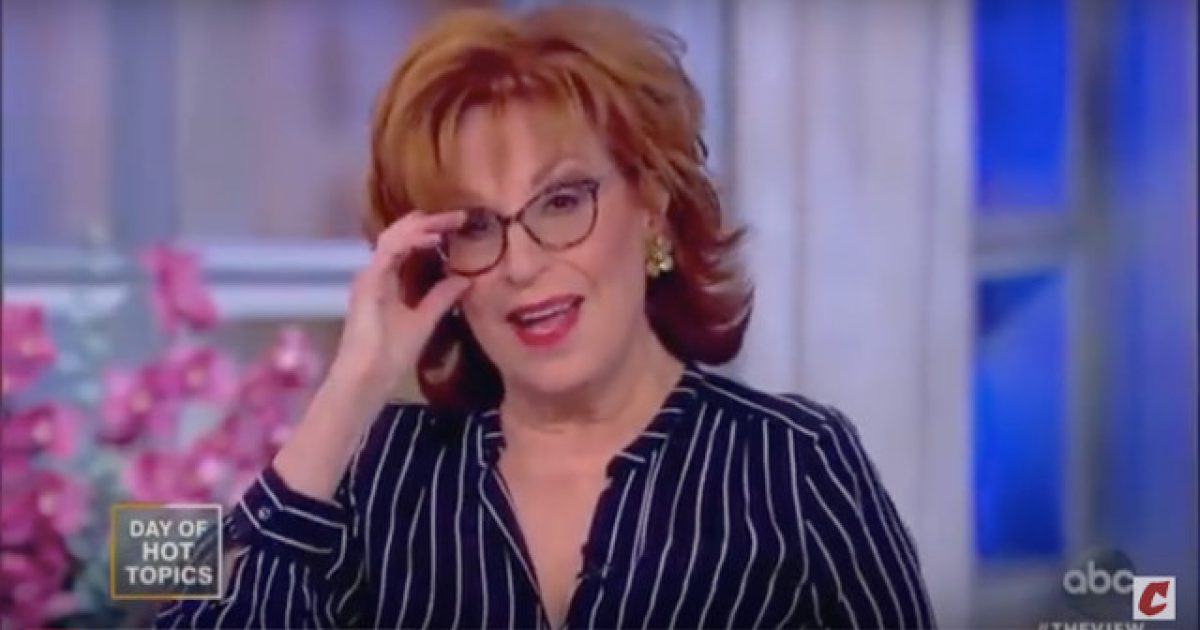 As if “The View” co-host Joy Behar wasn’t already obnoxious enough — she totally was — she’s gone ahead and once again stirred up a beef with fellow host Meghan McCain, accusing her of having a “hissy fit.”

Gee, such a classy lady, isn’t she?

As Behar was introducing a segment about Sen. Amy Klobuchar (D-MN) announcing her presidential bid, McCain appeared to attempt to interrupt Behar over bringing up President Donald Trump.

“Can I get through this, please?” Behar said to McCain.

Behar continued her introduction and began discussing Klobuchar making fun of the president after he tweeted that Klobuchar was “talking proudly of fighting global warming while standing in a virtual blizzard of snow ice, and freezing temperatures,” adding that “By the end of her speech she looked like a Snowman(woman)!”

Well, it happened again. Amy Klobuchar announced that she is running for President, talking proudly of fighting global warming while standing in a virtual blizzard of snow, ice and freezing temperatures. Bad timing. By the end of her speech she looked like a Snowman(woman)!

Science is on my side, @realDonaldTrump. Looking forward to debating you about climate change (and many other issues). And I wonder how your hair would fare in a blizzard? ☃️

After Behar introduced the segment and showed a picture of Trump’s hair messy from the wind, McCain said, “this whole thing is so stupid.” Then the other co-hosts chimed in.

“You know what I think she is trying to do?” Abby Huntsman said. “I think she’s trying to poke the bear. When you attack him physically, you know that triggers him, and if he attacks a woman for any physical appearance, that is when people cannot stand by that, just in the times we are in. I do wonder if that is a smart strategy for her to do that or if you’re more effective as a Democratic candidate to try and rise above it, rise above the bullying and the criticism. Maybe if you’re a woman, you have sort of an advantage because if he goes after you— ”

“Can I say something now?” McCain said after her fellow panelists finished giving their opinions. “Is that OK?”

“I have permission to speak now on Amy Klobuchar? We’re all good?” McCain asked.

“Okay, number one I have friends who were at her— ” McCain said until she was interrupted by something that Behar appeared to be doing off camera.

“No, by all means, keep going, Joy,” McCain remarked.

“If you’re going to have a hissy fit, we can’t continue,” Behar replied as she hopped into the next segment while the audience laughed and McCain glared at her with her arms folded. “Let’s go to Senator Elizabeth Warren … ”

This isn’t the first time that Behar and McCain have gone at each other. Back in December it was reported that Behar called McCain an “entitled b****” and threatened to walk out on the show if McCain didn’t get “under control,” whatever that means.

Behar herself has been embroiled in a bit of controversy after a clip from an old episode of the show has resurfaced talking about a time she wore an “African woman” Halloween costume that featured her with darker skin.