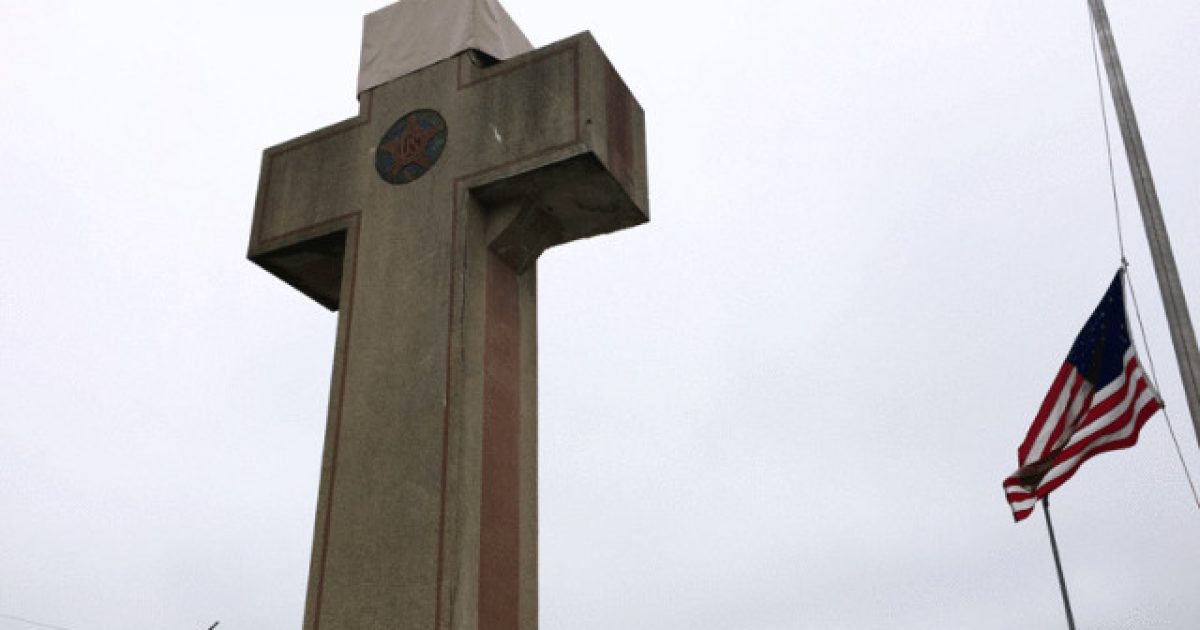 Two days before Christmas, over 100 years ago, a family living in Bladensburg, Maryland, received word that their only son, John Henry Seaburn Jr., was killed in action during the first Great War.

As it turns out, this was only the beginning of the bloodshed. A total of 49 other boys from the local area would die in the line of duty, their names etched forever in a gigantic Celtic style cross that sits in the center of a roundabout in the middle of town.

But of course, thanks to the angry atheist left-wingers of our modern generation, the image of the cross — despite it being for a memorial — is “offensive” so these folks have brought a lawsuit against the state parks commission, a case that is soon to be decided by the Supreme Court.

Tragic, isn’t it? Atheists seem to have zero class.

Three local residents brought a lawsuit against the state parks commission that administers the memorial in 2014. They won a favorable judgment in the 4th U.S. Circuit Court of Appeals.

That litigation notwithstanding, Bladensburg’s hallowed roll is a rich history of the period.

Among those 49 we highlight here only three: an infamous expatriate, whose lost honor was restored on distant atolls; a black infantryman whose country did not permit him to muster under its flag; and a son of the American Revolution.

Pfc. Thomas Fenwick was the scion of an old Maryland family. Among his ancestors were Col. Ignatius Fenwick, a Revolutionary War patriot, and Bishop Edward Fenwick, O.P., colloquially styled “the apostle of Ohio,” who founded the first Dominican chapter house in North America.

Fenwick, a much-watched pitcher for the local baseball team, enlisted as an infantryman in the Maryland National Guard, which devolved to the 115th Infantry, in the spring of 1917. Like his family, his infantry unit had old Maryland patrimony.

Some regiment historians argue that the 115th was first composed in 1775 when Capt. Michael Cresap raised a company of riflemen on the Maryland frontier after the skirmishes at Lexington and Concord. The 115th’s motto — “rally ’round the flag” — derives from the Civil War Battle of Front Royal, where Maryland infantry heroically stood their ground despite certain annihilation.

At 22, Fenwick deployed for France aboard the USS Covington as a machine gunner. His tour of duty was short-lived. Fenwick’s niece, Mary Ann Fenwick LaQuay, told The Daily Caller News Foundation that Fenwick died one week after exposure to a deadly chemical agent on Oct. 7, 1918. As with the Seaburn family, the Fenwicks were informed of Thomas’s death at Christmas.

“He was in a trench when the Germans used gas,” LaQuay told TheDCNF. “But he didn’t die right then and there. Because of the gassing, he got pneumonia, and he died of pneumonia.”

LaQuay’s home sits on the same street as the house Fenwick left when he enlisted. She says the Peace Cross is a proxy gravestone for her family.

“I feel like my uncle is buried there, even though he is in Arlington,” she told TheDCNF. “Every time I go by it, I remember him. That’s why that cross was put there — so that we don’t forget those 49 men.”

How sad is it the left would want to disturb a memorial set up for those who gave their lives in defense of their freedom? Many of these men were heroes who gave the ultimate sacrifice.

What, exactly, have these three individuals done for their country? Probably nothing in comparison.

How is this not shoving their own worldview down the throats of folks who disagree with their atheism? Is this not forced evangelism of a godless value system?

Hopefully the Supreme Court will make the right choice and preserve this memorial.