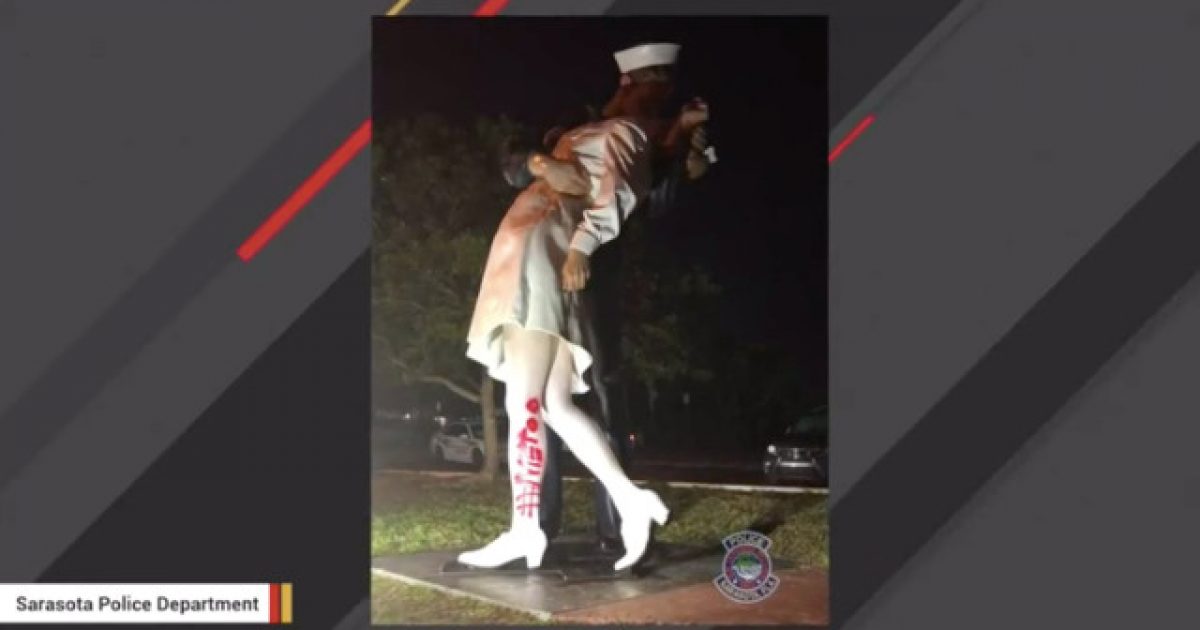 One of the most iconic images to come out of World War II is without a doubt the ‘kissing sailor,’ a photograph taken on August 14, 1945 by photographer Alfred Eisenstaedt.

The photograph features a U.S. Navy sailor laying a passionate kiss on a random woman in Times Square, New York City just before President Truman made his formal announcement of American military victory in Japan.

It seems today’s radical feminist crowd is not a fan of the image or the statue that was created in its honor as it’s been defaced with the hashtag #MeToo.

On Sunday, George Mendonsa, the Navy sailor identified as the titular “Kissing Sailor,” passed away. He would have turned 96 years old today. “He was very proud of his service and the picture and what it stood for,” said Mendonsa’s daughter, Sharon Molleur, as reported by NBC News. “Always, for many, many years later, it was an important part of his life.”

On Monday, the day after Mendonsa’s death, a prominent Sarasota, Florida statue based on the “Kissing Sailor” image was apparently vandalized by #MeToo partisans. NBC News reports:

The Unconditional Surrender statue in Sarasota, Florida — depicting the iconic image of a sailor kissing a woman in a nurse’s uniform in Times Square after the end of World War II — was vandalized Monday, only a day after the veteran in the photo, George Mendonsa, died at 95.

Officers responded at about 12:55 a.m. Tuesday to a report of a person spray-painting the statue, the Sarasota Police Department said in a statement.

When officers arrived, they found the words “#MeToo” in red covering the length of the woman’s left leg. The #MeToo movement supports the survivors of sexual abuse, assault and harassment.

The graffiti has since been removed from the statue.

Graffiti has been removed from the Unconditional Surrender statue. pic.twitter.com/dSrq1MbfsJ

Local Sarasota police do not currently have any strong leads as to the defacer(s), as Fox News reports. “There was no available surveillance video in the area that captured the incident. There are no known witnesses. It’s believed the incident occurred on Monday, February 18, 2019, between the mid-afternoon and evening hours, however, it is unknown exactly what time,” local police said in a released statement.

This is just more proof that the left is incapable of actually articulating their beliefs in a civilized manner, resorting to acts of vandalism and violence to make their point.

Like it or not, this photo has captured an important moment in our history, and whether you agree with it or not, it’s stupid to vandalize property to make some sort of ridiculous political point. If you want to win hearts and minds, perhaps good old fashioned debate is in order.

Regardless, it’s time to move on to more important matters than statues.