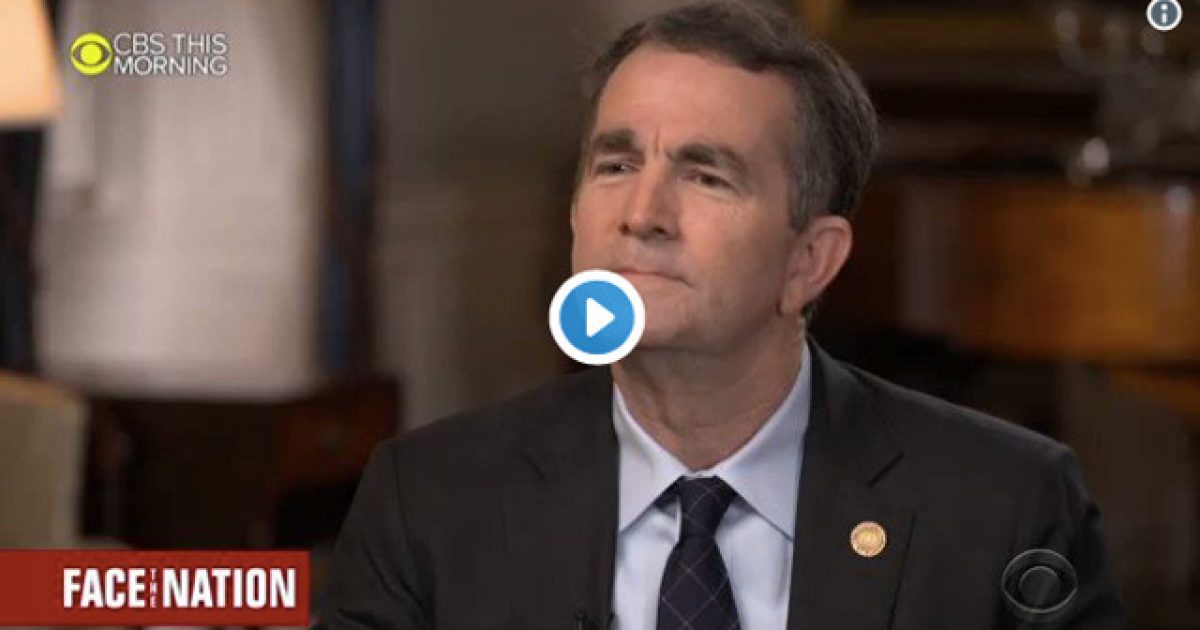 Virginia Gov. Ralph Northam, the despicable human being who attempted to publicly defend infanticide, has been involved in a proverbial fight to the death to hold on to his office after photographs surfaced of him in blackface.

Now, that would be enough to get most politicians to issue apologies, resign from their posts, and basically fade out of the public spotlight in an effort to escape the scathing retributive hand of the PC police.

Not Northam. No sir. He decides to make even more foolish comments on race and dig his hole even deeper.

“CBS This Morning” co-host Gayle King gave Northam what should have been a softball question: “This has been a very difficult week for you and the state of Virginia, so where would you like to begin?”

“Well, it has been a difficult week. And you know, if you look at Virginia’s history, we’re now at the 400-year anniversary, just 90 miles from here, in 1619, the first indentured servants from Africa landed on our shores in Old Point Comfort, what we call now Fort Monroe and while —”

Virginia Gov. Ralph Northam: “We are now at the 400-year anniversary — just 90 miles from here in 1619. The first indentured servants from Africa landed on our shores in Old Point Comfort, what we call now Fort Monroe, and while—”@GayleKing: “Also known as slavery” pic.twitter.com/AiX96MU1rJ

For those who might not know, an indentured servant was someone who agreed to work, often in harsh conditions, for a set period of time to pay off a debt. People frequently went into indentured servitude voluntarily, for example to pay for passage to America, and they could look forward to a day when they would be free again.

As those of us with two functioning brain cells can attest to, there was no such option that existed for slaves back in the day. There was nothing they received in exchange for their services except more and more misery and suffering.

It was truly a horrific time and a definite blight on humanity that such an institution existed, especially here in America. However, we’ve abolished that horrible act and have made great strides toward equality, which has made our country one of the best in the world.

“Virginia needs someone that can heal. There’s no better person to do that than a doctor,” the governor said. “Virginia also needs someone who is strong, who has empathy, who has courage, and who has a moral compass. And that’s why I’m not going anywhere. I have learned from this, I have a lot more to learn, but we’re in a unique opportunity now — again, the 400-year anniversary of the history, whether it be good or bad, in Virginia — to really make some impactful changes.”

“Of slavery in this country, in this state, yeah,” King added, after Northam again failed to actually say what this year was the 400th anniversary of.

Gov. Ralph Northam tells @GayleKing: “Virginia needs someone that can heal. There’s no better person to do that than a doctor. Virginia also needs someone who is strong, who has empathy, who has courage and who has a moral compass. And that’s why I’m not going anywhere” pic.twitter.com/pHgxM7oGKh

This guy has truly learned nothing from his situation has he?