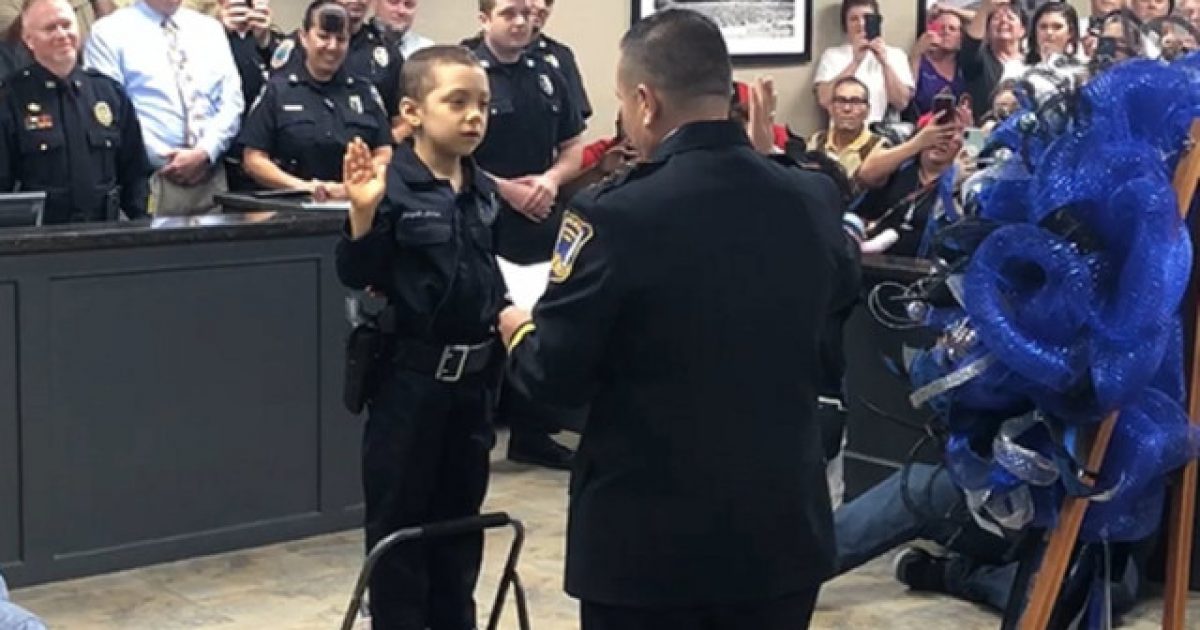 Six-year-old Abigail Arias got to be sworn into the Freeport Police Department in Texas, fulfilling her dream of being a law enforcement officer.

Arias suffers from cancer, which she calls “the bad guys.”

“I have cancer. The bad guys are in my lungs,” Abigail told KTRK-TV. The little girl fought off a kidney cancer only to have it return, and doctors have told her parents there is no cure.

In December, Abigail attended a “Pancakes with Santa” event at the Freeport Police Department, where she told Chief Garivey that when she grows up, she wants to be a police officer. Garivey learned “the chemo and radiation hasn’t worked and basically the family is now leaving it in God’s hands and praying for a miracle.”

Garivey told KTRK, “Her terrific smile and will to keep fighting ‘the bad guys’ inside of her — I wanted to make her dream come true. You have to meet her to really understand what a great and inspiring young lady she is.”

The chief reached out to a company called Cop Stop, which donated a custom-made uniform for Abigail, complete with a gun belt and duty rig for her to wear during her swearing-in.

Police officers from around the state were in attendance when Abigail raised her right hand and pledged to uphold her duties, vowing to be kind to others, help others when they need help, and help her police family at all times. The final part of her pledge before the attendees was: “I now, and forever, promise to keep fighting the bad guys until all of my cancer is gone.”

If this doesn’t want to make you just bawl your eyes out, then you don’t have a soul.

This precious little girl has been given a great gift thanks to this local police department, further proving that the boys in blue are true heroes.

Please keep Arias and her family in your prayers as they go through this awful, awful ordeal.