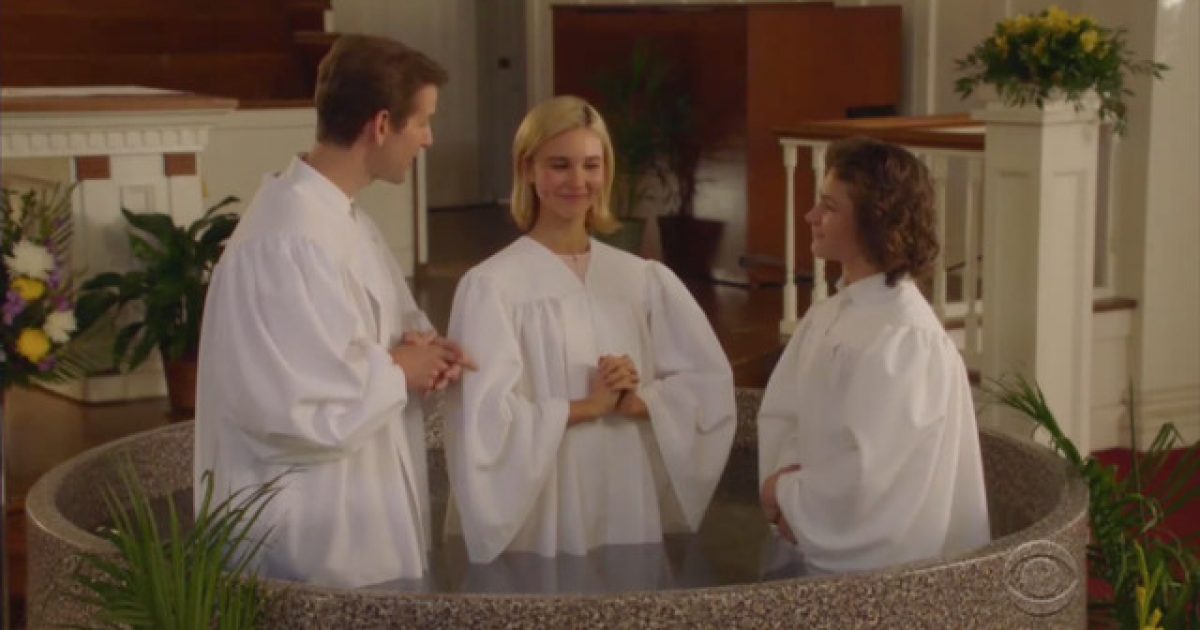 A recent episode of “The Big Bang Theory” spinoff “Young Sheldon” is making Christians across America angry after it seemingly mocked baptism and prayer by sexualizing both of them over the course of the show.

The episode revolves around Sheldon’s brother, Georgie, who seeks to become a Christian after his girlfriend finds faith in Christ. He prays and attempts to bargain with God, stating he’ll be a believer if he lets her have his girlfriend in a sexual manner.

The episode focused on a recurring story surrounding Sheldon’s older brother Georgie and his crush on a fellow student named Veronica who becomes a Christian mid-way through his courting session. To keep close with Veronica, Georgie does all sorts of Christian activity with no sincerity whatsoever, including attending his mom’s Bible study and accompanying them to church. At one point in the episode, as the three give their prayers up to the Almighty, Georgie asks God to give him Veronica in exchange for his allegiance. Transcript provided by Media Research Center:

Pastor Jeff: And now, why don’t we take a moment to pray, uh, keeping in mind that our prayers should not be for our own benefit, but for our family, friends, fellow Texans, Americans of all races and religions and the world. Well, most of the world. Y’all know what countries to pick.

Mary: Lord, please look after my family. Give them everything they need to be happy and healthy. And this lovely young girl with me tonight, help her stay on the path of righteousness.

Veronica: God, please look after my sister. You can find her at the women’s correctional facility in Lubbock. Help her seek salvation in you instead of cocaine, marijuana and bass players.

Georgie: Jesus, I’m sure, even from Heaven, you can see how hot the girl sitting next to me is. And I know I’m not supposed to pray for myself, but here’s the deal: If you can get her to fall in love with me, and you know, make some bad decisions, I swear I’ll come to church every Sunday.

Mary: And thank you for bringing Georgie tonight, even though you and I both know why he came. Speaking of which, whatever he’s praying for right now, ignore it.

Veronica: And please protect me from impure thoughts, and teach me to respect the sanctity of my body.

Georgie: Now if for instance she and I were to go skinny dipping and one thing were to lead to another under the moonlit sky, get this: Not only do I become a devout Christian, I will also bug everybody I meet to do the same. And you know I can be real annoying when I set my mind to it.

Georgie: I’m gonna take your silence as a yes. Amen.

Later in the episode, Veronica is baptized, but when she pops back up out of the water, Georgie sees her as a sexy young woman giving him a seductive look. After he is baptized, he’s so excited that he plants a kiss on Veronica and ends up getting punched, earning a black eye.

The mother, Mary, who is portrayed as a devout believer — Hollywood’s idea of a devout believer anyway — doesn’t bother to reprimand her son for his behavior until the end, despite knowing he was faking it to get a girl. Yeah, all kinds of problems with that.

Baptism and prayer are sacred things to Christian believers. Would Hollywood dare to produce something that poked fun of Muslim religious practices? Not a chance. That wouldn’t be tolerant.

However, it’s totally cool to be intolerant when it comes to Christians. Hypocrisy at its finest.