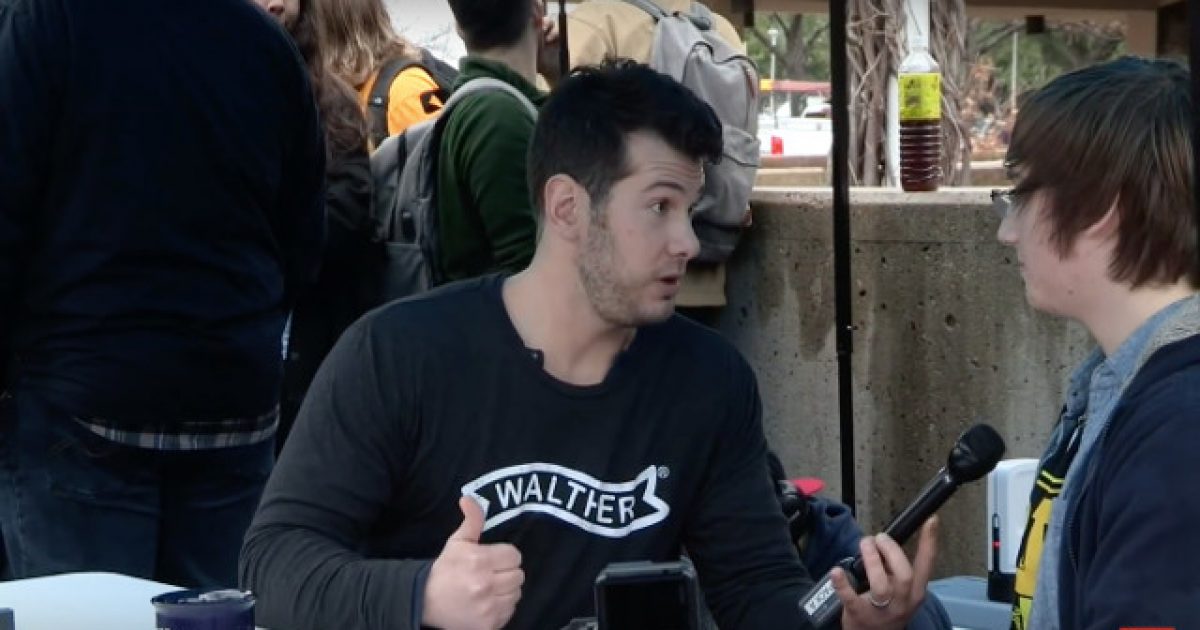 The latest installment of “Change My Mind” by conservative commentator and comedian Steven Crowder has him going toe-to-toe with border wall opponents in an epic, long-form conversation.

Crowder engages in a little one-on-one chit-chat with four college students, all of which are interesting, however there’s one in particular that stands out.

The student in this exchange is a perfect illustration of how progressives debate this controversial issue, relying on incorrect information and shifting arguments.

STUDENT: I don’t really disagree with the fact that we need to enforce our laws – of course we do need to enforce our laws. My problem with the wall is just, isn’t there a simpler solution to this broader problem? Someone told me before that the reason why it’s being built … is to stop illegal immigration. But the fact is that most illegal immigration is from expired visas. So, wouldn’t it just be a simpler way to just keep track, keep tabs on people who have visas from overseas, and just keep a look at them instead of creating a $5 billion dollar wall that’s going to require maintenance?

CROWDER: I appreciate where you’re coming from with that. This is where we kind of run into a common issue on college campuses. So, how confident are you that the majority of illegal immigrants are just overstayed visas?

CROWDER: It’s 42%, which means less than half, which means the majority of illegal immigrants are crossing through the border unfettered. But how about this – how about doing both?

STUDENT: I’d be down for both, but my problem with the wall is it’s too expensive. Wouldn’t it just be easier to create more checkpoints? Something like that?

CROWDER: So how would you create checkpoints?

STUDENT: I mean, it would still have to be an infrastructure project … I’m just saying we don’t need an entire concrete wall to do that. With a concrete wall … nothing’s gonna stop somebody from chiseling away at the wall, but someone sitting at a desk watching the border, they’re probably gonna be able to see…

CROWDER: The most liberal estimates on the wall, it would cost about $20 billion plus.

CROWDER: $20 billion plus. So, I’m giving you more there. It sounds expensive. And I would say that, yeah, I’m obviously a fiscal conservative – I don’t wanna waste taxpayer dollars. I assume you’re probably lining up on the same side of the coin there. But how much do you think illegal immigrants cost the American taxpayer every year?

STUDENT: You’re gonna have to be more concise on that. Just saying, “How much do illegal immigrants cost?” That’s encompassing a lot of things.

CROWDER: Using social services, abusing the health care system, public education, using services that they’re not necessarily paying for because they don’t pay taxes. How much do you think they burden you and me, the American taxpayer, each year?

STUDENT: I don’t think I’d be able to give an informed decision on that.

CROWDER: And that’s not a trick question. The whole purpose of this – I hope you feel it’s been respectful – is not to do “gotcha,” but I think a lot of people aren’t really informed on this issue. Illegal immigrants cost, on average, the American taxpayer $116 billion dollars a year. So even if you’re to take the most liberal estimates … $20 billion to build a wall. If you look at the investment/reward ratio there, $116 billion dollars to the tax payer each year, $20 billion dollars is kind of a drop in the bucket…

That’s just a sample of the arguments. If you’d like to read a full transcript of the segment, visit the link sourced at the bottom of this piece.

One of the things that’s awesome about the way Crowder conducts these conversations is how hard he tries to be civil and respectful, having an actual, honest-to-goodness debate on the topic, a meeting of the minds.

It’s treating other people with respect and as intellectual equals, understanding that the main reason so many people hold the views they do is because they are not equipped with the right information, something Crowder is seeking to remedy.

At the end of the day, his approach to civil discourse is the right way to go. Let’s hope it has an impact on those who are against the border wall.