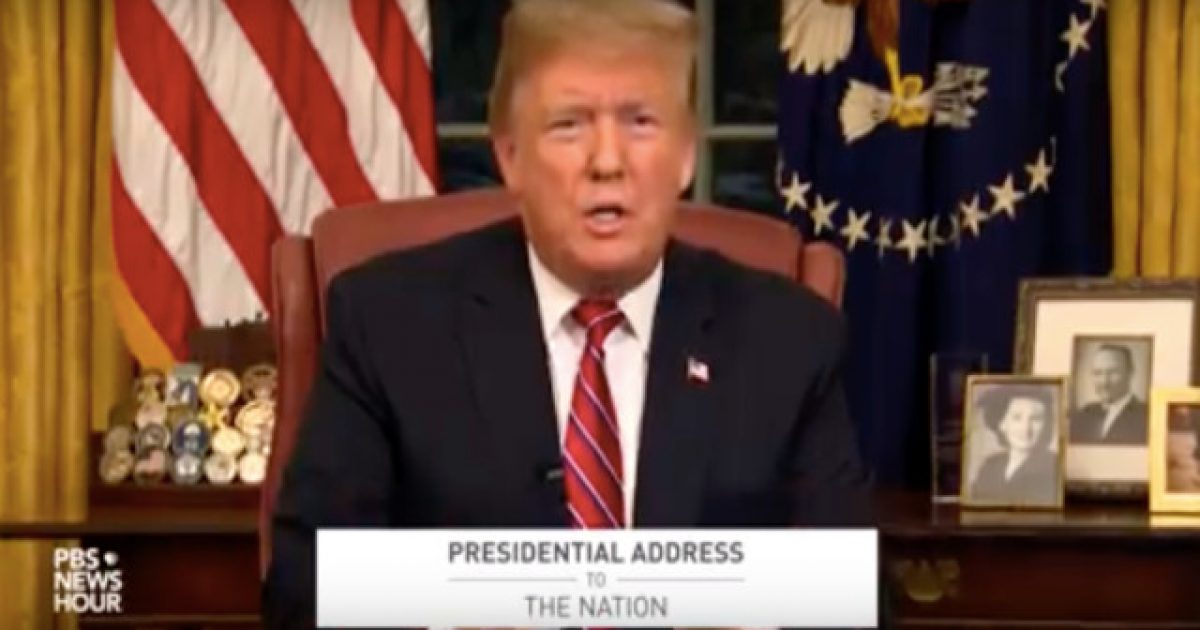 President Trump delivered a speech on Tuesday evening where he made an epic speech about the crisis going on at the border, making a solid case for why we need a wall and pointing the finger at Democrats for the government shutdown.

It’s nice to see a president who isn’t afraid to tell you the truth, whether you want to hear that truth or not.

The president also blamed Democrats for the government shutdown, saying that their reticence to fully fund border security was forcing his hand on the issue.

“The only solution is for Democrats to pass a spending bill that defends our borders and reopens the government,” said the president.

He also said that he had agreed with the Democrat demand that the barrier not be a concrete wall.

“At the request of Democrats, it would be a steel barrier, rather than a concrete wall,” Trump said. “This barrier is absolutely critical to border security.”

Trump cited some of the families that were hurt by illegal alien crimes and murders which would have been prevented with more forceful immigration enforcement .

Many were predicting that he would declare a “national emergency” on illegal immigration and use the powers stemming from such a declaration to order the military to build his wall.

CNN’s Jim Acosta reported before the speech that many of the president’s advisors were encouraging him to declare an emergency despite the legal repercussions that such a proclamation would inspire.

“Trump has been reaching out to friends and advisers to ask about national emergency declaration at the border,” Acosta tweeted. “Several of those folks have told Trump it ‘probably won’t work’ from a legal standpoint, I’m told.”

President Trump did not announce a state of emergency during his speech.

House Speaker Nancy Pelosi and Senate Minority Leader Chuck Schumer gave their response to the speech, spewing the same old talking points, claiming the president is doing nothing but throwing a temper tantrum by refusing to give in on funding for the border wall.

Trump is telling the truth about the border, and while the left may be fighting tooth and nail against the idea of a wall, we need it in order to keep our country safe.

A nation without borders is no nation at all. When people can freely come and go out of your country without concern for the law, it’s like hanging a sign above your front door welcoming burglars to come on in and take whatever they like.

Let’s hope that Democrats cave soon, provide the funding for the wall, and end this government shutdown the right way.