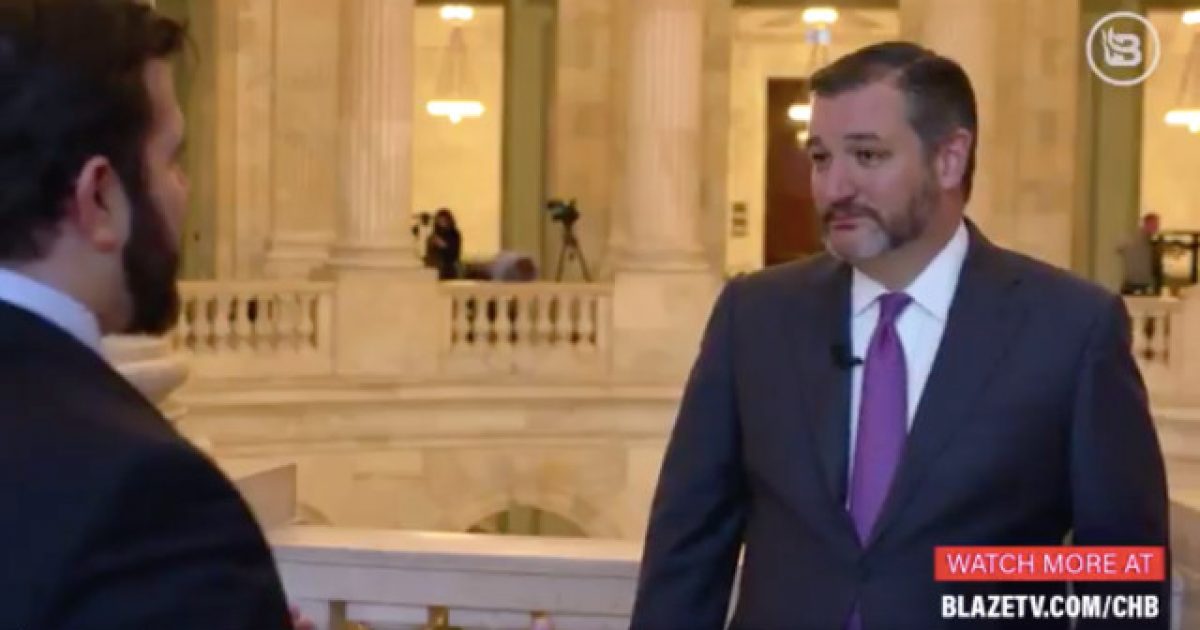 On Wednesday, Texas Sen. Ted Cruz was asked about Speaker of the House Nancy Pelosi’s postponement of President Trump’s State of the Union address and the answer he gave couldn’t be more spot on.

Pelosi wrote to President Trump on Wednesday, “Sadly, given the security concerns and unless government re-opens this week, I suggest we work together to determine another suitable date after government has re-opened for this address or for you to consider delivering your State of the Union address in writing to the Congress on January 29.” She later told CNN, “This is a housekeeping matter in the Congress of the United States, so we can honor the responsibility of the invitation we extended to the President. He can make it from the Oval Office if he wants.”

The interviewer started with Cruz by commenting, “So we’re seeing some efforts from House Democratic leadership to either postpone or put off the State of the Union address because of the shutdown.” He asked Cruz, “Does it really make any sense whatsoever to try to do that, and do people honestly believe that they are going to silence President Trump or end the partial shutdown by talking away the House chambers cameras from him?”

Listen, if you’re Nancy Pelosi it makes a lot of sense. Nancy Pelosi is terrified, number one, of her extreme left-wing base; she is captive of that; and number two, the position of Congressional Democrats in this shutdown is objectively unreasonable. In 2013, Chuck Schumer and every Senate Democrat voted in favor of 350 miles of border wall. They have right now shut the government down to stop 234 miles of border wall. I don’t know how you explain that you voted in favor of 350 miles but you shut the government down to stop 234 miles. That is incoherent.

The honest answer: It’s not a substantive disagreement; it’s that they’re terrified of their extreme left wing, who hates Trump. And that’s why we’re having a shutdown. So why does Nancy Pelosi not want the State of the Union? Because the State of the Union is an enormous platform for the president to speak directly to the American people, and she doesn’t want people focusing on the substance of this issue. She wants their information to come from the mainstream media rather than the president.

Listen, it’s the same reason, You remember, back right before the shutdown, when the president met with Pelosi and Schumer in the Oval Office and it was a remarkable meeting. I thought the funniest and most revealing moment was when Pelosi said multiple times, “Please, can we turn the cameras off? Can we get the reports out of here” She didn’t want people to see then that their position was objectively unreasonable. The president has said he’s willing to compromise; he’s willing to negotiate but we need to secure the border. The president’s right on that. Their position is not defensible so of course she’s trying to hide from the cameras and I don’t think we should let her.

This is why Ted Cruz is the man. You’ll be hard pressed to find a sharper mind and wit in Congress than this guy and what he says here about the media narrative is absolutely true.

If real Americans hear straight from Trump what’s going on in our country, they’re more likely to believe him than they are folks like Pelosi or other voices in the mainstream media.

The main power and sway that the left has over our culture is that they control the narrative, via their propaganda arm in the mainstream media. Alternative media sources and the president himself are threats to that narrative, so any and all action to silence those voices must be taken in order for them to continue pushing their agenda.