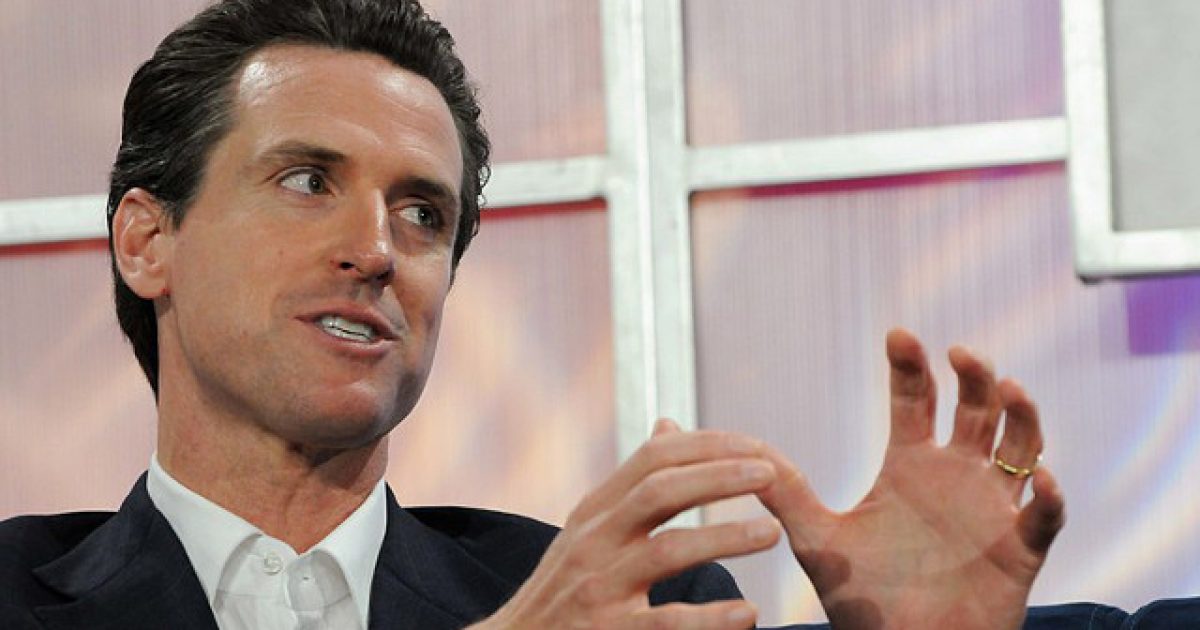 Newly elected Democratic Governor Gavin Newsom was smack dab in the middle of his oath of office on a day that should have been a time of celebration for him and his family, when a protester decided to intrude on the moment to share their thoughts on the whole “sanctuary city” rhetoric spewed forth by modern day liberals, including Newsom.

Sure, this individual could’ve probably picked a better time to get vocal, but then again, here we all are, talking about their message and spreading to the far reaches of the Internet. Guess the tactic worked after all.

In a moment caught on video, Newsom, the 40th governor of California and successor to pro-“sanctuary” Democrat Jerry Brown, can be seen on stage with his wife and four kids ready to take the oath of office. As SF Gate notes, just as the judge begins to instruct the governor to raise his right hand, the “sanctuary” of the ceremony is disrupted.

“I object!” shouts a man, who reportedly had press credentials, from the audience. “Blood is on your hands!” he shouts. “Shame on you!”

The man is quickly singled out and escorted out, but not before he makes clear what he’s protesting: the dire consequences of “sanctuary state” policies.

In an attempt to reset the festive mood, the audience begins chanting “Gavin! Gavin!” while the man continues to express his “objections.”

Newsom, who made a point of underscoring his support of sanctuary policies that evening, did his best to ignore the unfortunate eruption of a dissenting voice.

Someone with press credentials shouts “I object” as Gavin Newsom is about to take the oath of office. He’s escorted out pic.twitter.com/e7bD3chNcU

At the swearing-in ceremony, Newsom, the former mayor of sanctuary city San Francisco, underscored his support for the federal immigration authorities-defying policies, promising that California will offer “sanctuary to all who seek it.”

Though he was careful not to utter Donald Trump’s name, he repeatedly hammered the president’s attempts to address the illegal immigration crisis. “A wall that should never be built,” he said, and children should not be “ripped away from their parents” suspected of crossing the border illegally at the border, CBS Los Angeles reports.

We are a sovereign nation. Sovereign nations have borders. They also have laws on the books that protect those borders and the citizens who live within them. Those who don’t respect our nation’s sovereignty, nor care for the laws that govern our security, do not deserve to be here.

In fact, a recently twice-deported illegal immigrant, who benefitted from protection provided by California policies which prevents criminal illegals from being held by law enforcement and ICE agents, ended up going on a rampage that ended with the immigrant dead, a man murdered, several folks wounded, a carjacking, an armed robbery, and a high speed chase.

This is the kind of individual, those with criminal records, we want to keep out of this country. It’s impossible to do that when the criminals already here are protected by sanctuary city laws.

How much bloodshed has to happen before the left opens their eyes.