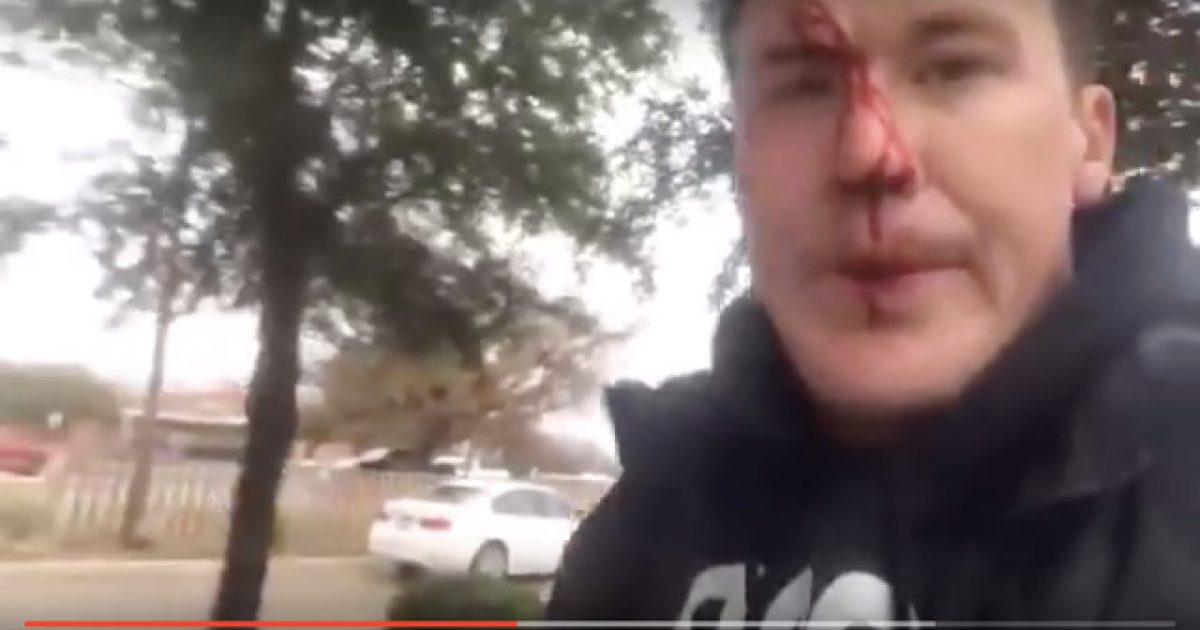 A pro-life activist standing outside of an abortion clinic in Fort Worth, Texas got a true taste of that oh so wonderful liberal tolerance we here so much about when he got pummeled for uttering three little words.

Ryan Roberts, the founder of Abortion Clinic LIVE, was attempting to dissuade women from aborting their babies at Whole Women’s Health in Fort Worth when a man threatened to kill him and then punched him in the face several times, reported FaithWire.

“This place kills babies! Can we help you?” Roberts is heard yelling to a man in a truck during a Facebook Live event, a clip from which has since been posted to YouTube.

Noticing the Christian bumper stickers on the truck, including one that said “Christ is King,” Roberts told the man he liked his truck.

Then the man unintelligibly responded, causing Roberts to approach him for clarification.

“We’re about to adopt a baby…” Robert’s told the man.

“Do you want to die?” the man in the truck interrupted.

“What do you mean?” Roberts asked.

“You and your whole family,” the man replied.

“What are you talking about?” Roberts asked.

“You need to get going,” the man said.

The man in the truck reversed into the street and started to drive away. Roberts once again yelled “Jesus loves you sir!”

A few moments later, the truck stopped. The man got out, charged at Roberts and punched him in the face several times, which left his face a bloody mess. The man then got back in his truck and kept driving up and down the street while revving his engine.

However, what’s truly remarkable is that this incident did not prevent Roberts from carrying out his mission.

“Please don’t do this to your little baby today!” Roberts yelled while spitting out blood. “That little baby loves you! Thank you, Jesus, thank you, Father God. Thank you, Lord.”

As a man entered the clinic, Roberts begged him to not abort a baby.

“I don’t blame him,” the man responded.

“You don’t blame him? Okay thanks,” Roberts responded. “Those little babies deserve to live bro. You’re going to be a good dad.”

Let’s be real for a second. Pro-abortion people are disgusting. Thoroughly disgusting. Anyone who would murder an innocent child because it “inconveniences” them is an awful human being.

Roberts is truly a saint for putting up the assault he endured and continuing on his mission. This is what happens when someone radically loves Jesus Christ. He didn’t wish his attacker harm. He didn’t strike back or lash out. He simply continued being a light and a witness for the Lord.