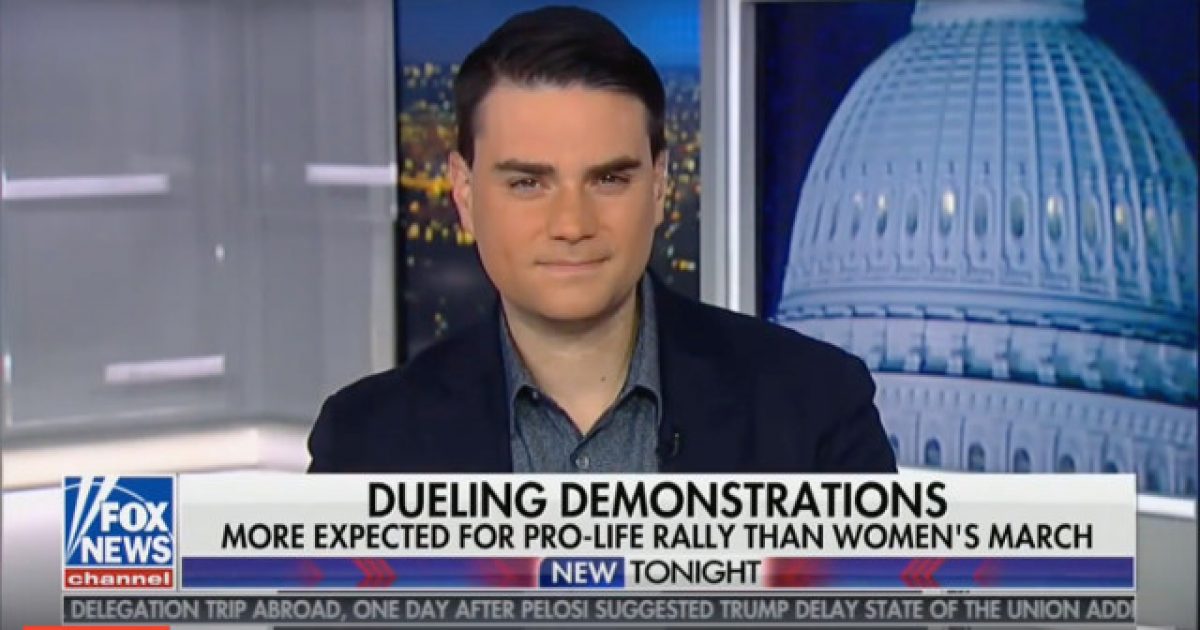 Daily Wire editor-in-chief Ben Shapiro is one of the sharpest minds in the conservative movement, so when he sets his mind to destroying something using logic and fact, you can pretty much count on it being obliterated.

Well, it seems a big target that Shapiro is focusing on this week is abortion, which many claim is the Civil Rights issue of our modern day.

The conservative powerhouse is getting ready to headline the March For Life, but on Thursday, the eve of the event, Shapiro appeared on Fox News and spoke with host Shannon Bream, where he totally annihilated pro-choice arguments that say life doesn’t begin at conception.

On Fox News with host Shannon Bream Thursday night, on the eve of the March for Life, Daily Wire Editor-in–Chief Ben Shapiro, who is headlining the event, pulled no punches as he slammed pro-choicers who insist that life does not begin at conception, took apart the idea that abortions before 20 weeks were tolerable because babies might not feel pain, and dismissed the claim of Democrats who complained the pro-life movement was partisan by snapping, “That’s a bunch of crap … They marginalize every pro-life voice on the Democratic side of the aisle.” He fired, “What’s the pro-life movement supposed to do with that? Ask Nancy Pelosi to keynote?”

Bream began the discussion by noting that the theme of the March for Life this year is, “Unique from day one: pro-life is pro-science.” Turning to Shapiro, Bream said, “Not everyone thinks so.” Bream continued by citing a Media Matters article titled, “Anti-Abortion Groups Will Claim Science Is On Their side … Media Shouldn’t Let Them.” She also cited an article from Stat News that wrote, “As the March for Life approaches, anti-abortion leaders are rebranding as ‘Pro-science.’ Scientists say otherwise.”

Bream noted that she had covered the March for Life for years, and her perception was that the participants had gotten younger and younger as young women viewed 3D and 4D ultrasounds and saw their babies in utero. She commented, “It seems to be reaching young people in a different way.”

I think it’s totally true. When I speak to young audiences, I speak to college audiences all the time, this is what I see: The focus on the pro-life movement among young people has never been religiously-based. And this is where the media really do lie about the pro-life movement. The impression that you get about the pro-life movement when you listen to media coverage from mainstream media networks is typically that pro-lifers are driven by religious zeal, that’s it’s a bunch if people who go to church and they learn the Psalms, and because they’ve read the Psalms, they decide that babies are worthy of protection.

But the truth is the real momentum in the pro-life movement is about young people who have seen 3D ultrasounds, 4D ultrasounds; they’ve actually seen the pictures; we now know what babies look like in the womb; we know what developmental stages babies go through, and that’s a very convincing argument to young people, and many of the same young people who are frustrated with the Right over their supposed inability to tackle climate change are pro-life because they are pro-science all the way through. Even if people on the Right may think they’re wrong on climate change, they’re obviously taking science seriously enough to take it seriously enough on life issues as well.

Not only does science prove that life begins at the moment of conception, thus making these unborn individuals real, living human beings, but so does the Word of God.

Those of us who have faith in Jesus Christ know that each and every unborn child is an image bearer of God. With this holy, unique designation given to each human life, every unborn baby is a precious soul, a person designed to reflect the character of God.

But not in the case of abortion. This needs to change. It must change. If we cannot, or more appropriately, will not, protect the right to life for our most vulnerable citizens, it won’t be a right that’s protected at all.