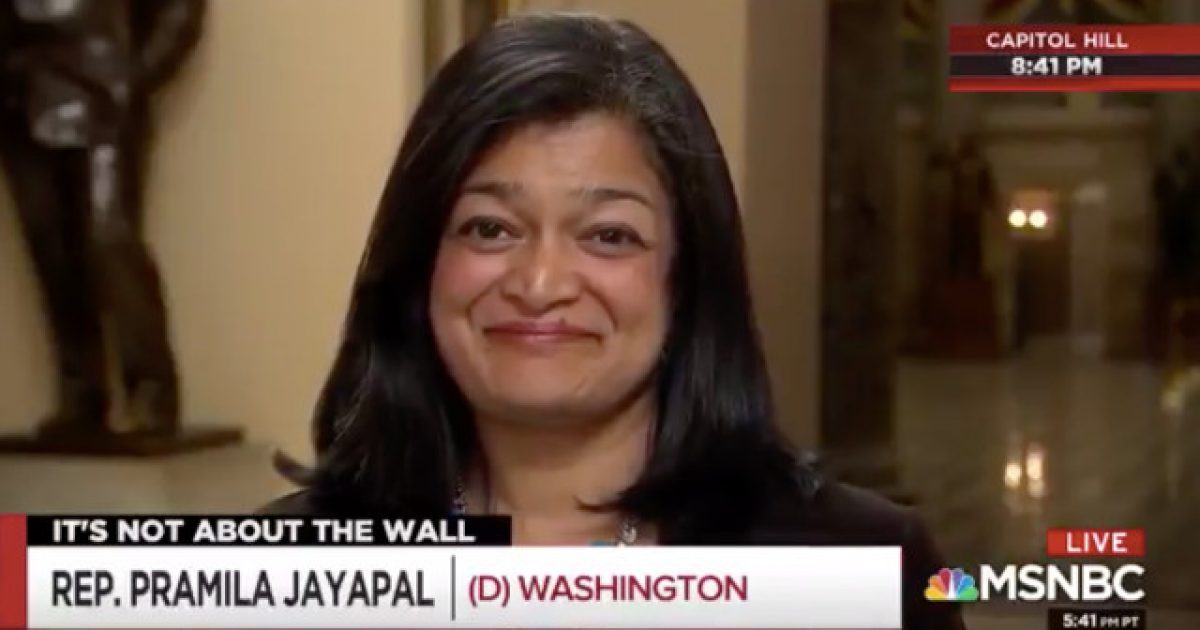 Democratic Congresswoman Pramila Jayapal sat down with MSNBC host Chris Hayes where she made a rather outlandish and completely untrue charge against President Trump.

Jayapal stated that Trump’s ultimate goal was to make America “pure” by getting rid of “folks of color” in this country.

Hayes prompted the outburst by asking, “Do you think that a bill can be made or do you think this is fundamentally existential and cannot be made?”

It is fundamentally existential and if he continues to insist on a wall—you just said it so beautifully, Chris; this has never been about a wall. He actually could have gotten funding a couple of years ago, or a year ago, for a wall. It was part of a deal that was proposed, not all of us agreed with that deal but it was proposed to him and he turned it down because his ultimate goal is, as you said, to make America “pure” in the sense of not having immigrants, not having folks of color here, and shutting down every form of legal immigration.

She continued later by saying she hoped Trump’s plans would “backfire on him”:

What’s interesting, Chris, is that if you look at where immigration fared in the 2018 elections, we actually found people turning away from this view, that it was too racist, too bigoted, too xenophobic, and people coming over. Y’know, most people in America do remember that they are one generation, two generations, just a little bit removed. They were uncomfortable with the level to which this has gone. And so I hope that this can backfire on him and I hope that it continues to backfire on him because he has never been interested in being a president for the whole country.

He’s only interested in throwing out red meat. And I just have to say, as an immigrant myself, it is do deeply offensive to see the harm that he’s causing to people across the country, people who are terrified, who don’t feel that they belong. The people who are seeking asylum, who no longer can get in, even though it’s legal to seek asylum, and not just at a legal port of entry. You know, all of the people who have come to this country because of what we represent, the deep harm that is being done and the violence that’s being committed against Muslims through hate crimes, against Latinos, against folks of color; there is real damage, not only to real people, but also our soul and our psyche.

Democrat Congresswoman Pramila Jayapal blatantly lied tonight on @MSNBC by claiming that President Trump wants to eliminate all people of color from America in hopes of bringing forth "purity" in America. An absolutely shameful & desperate lie. pic.twitter.com/l0uAoMlLHl

I joined @allinwithchris to discuss the border wall. Trump has never been interested in being a president for the whole country. People of color and immigrants know this too well.

His wall was never about policy: it has always about Trump's efforts to lead a more "pure" America. pic.twitter.com/lUdgVIQVzG

The left has never been shy about making up baloney stories to try and take down President Trump and throw all kinds of wrenches in the works of his agenda, but to come out and saying something this horrible with absolutely no proof of the claim is really sinking to a new low.

President Trump has given no evidence that he’s a racist. None whatsoever. Apparently, Jayapal thinks that protecting your own people and resources from an invasion of illegals is somehow racist.

Having a wall is no more racist than having a front door with locks on it.

Shame on Jayapal for making such outlandish accusations. Someone working in public service ought to know better.