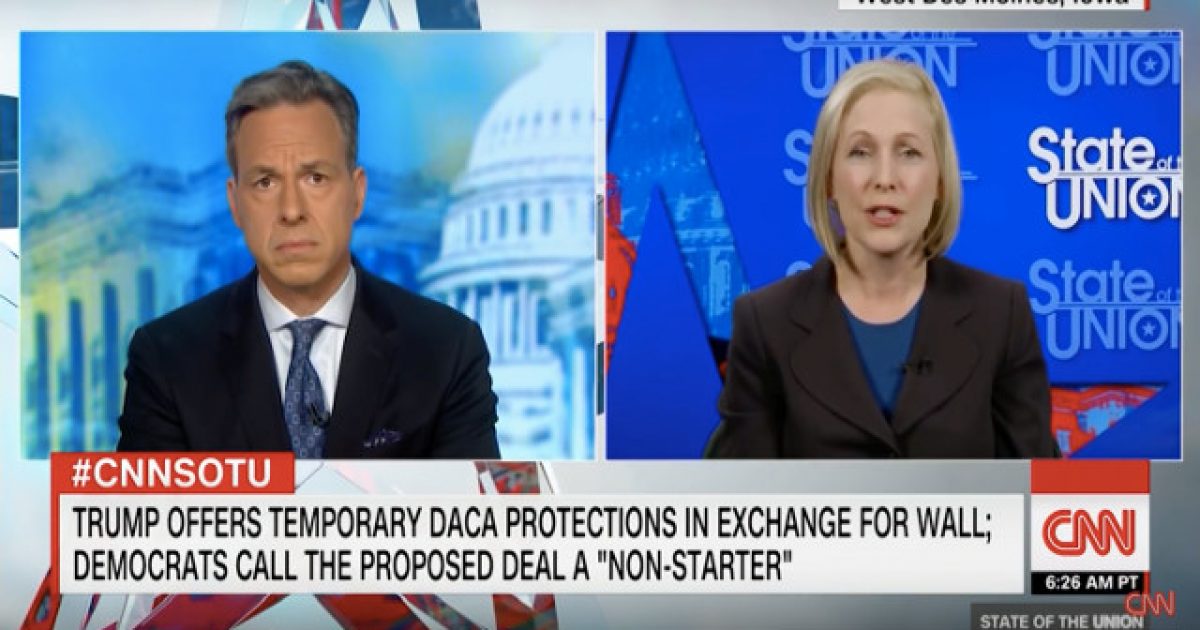 Senator Kirsten Gillibrand made an appearance on CNN’s “State of the Union” with host Jake Tapper to chit-chat about her upcoming bid for the 2020 Democratic Party presidential nomination.

During the course of the interview, Tapper gets into an exchange with Gillibrand over President Trump’s “racist” immigration policies.

TAPPER: All right. You have said Trump’s immigration positions are racist. That’s the word you used — racist.

Now, as you know, you were more conservative early on in your career on immigration. CNN’s KFILE is out with a new report this week on your 2008 campaign website and a mailer sent from your congressional office back then, a long time ago, but still in your public life.

Take a look. You said you were a “firm opponent” of government “amnesty to illegal aliens.” You said English should be “the official language of the United States.” You called for expediting deportation of undocumented immigrants. I know you have very different positions today.

TAPPER: But, let me ask you, if Trump’s immigration positions are racist, were they racist when you held some of those positions as well?

GILLIBRAND: They certainly weren’t empathetic, and they weren’t kind, and I did not think about suffering in other people’s lives.

And one thing I did ten years ago, when I became senator and was going to represent twenty million people across our state, I recognized that a lot of places in my state were different, and I needed to understand what those constituents needed, too. And so I took the time.

I went down to Brooklyn. I met with Nydia Velazquez, who has been a leader fighting for families for a long time, and I listened, and I realized that things I had said were wrong. I was not caring about others; I was not fighting for other peoples’ kids the same way I was fighting for my own. And I was wrong to feel that way. And so I just said, “I’m not going to stand by and do nothing for families that are suffering in my state and in my communities.”

TAPPER: So, what’s the difference, though, just help me understand, between your previous positions, which you characterize as wrong and not empathetic, and President Trump’s positions today that you call racist?

GILLIBRAND: So, what President Trump is doing is creating fear and division and a darkness across this country that I have never seen before.

One of the reasons I’m running for president, Jake, is because we have to restore that integrity to our presidency, to this country. We have always cared about others. We have always believed in the golden rule.

This president has sown fear and division that just makes us weaker. And so I think what he’s done is so horrible and so mean-spirited, that I am nothing like him and never will be because my values haven’t changed.

Now, there’s something that’s fairly obvious to any individual capable of rational thought that seems to have escaped Gillibrand. A political position cannot be racist. Only a person can be racist.

The morality or immorality of a political position never changes, though people themselves do. See, the problem with Gillibrand is a lack of consistency in the application of her own principles and line of thinking.

If being against amnesty is racist now, it was racist in 2009 when she held the same position. Period. There’s no way around that.

Perhaps Gillibrand needs to take a few courses in logic before heading out on the campaign trail?