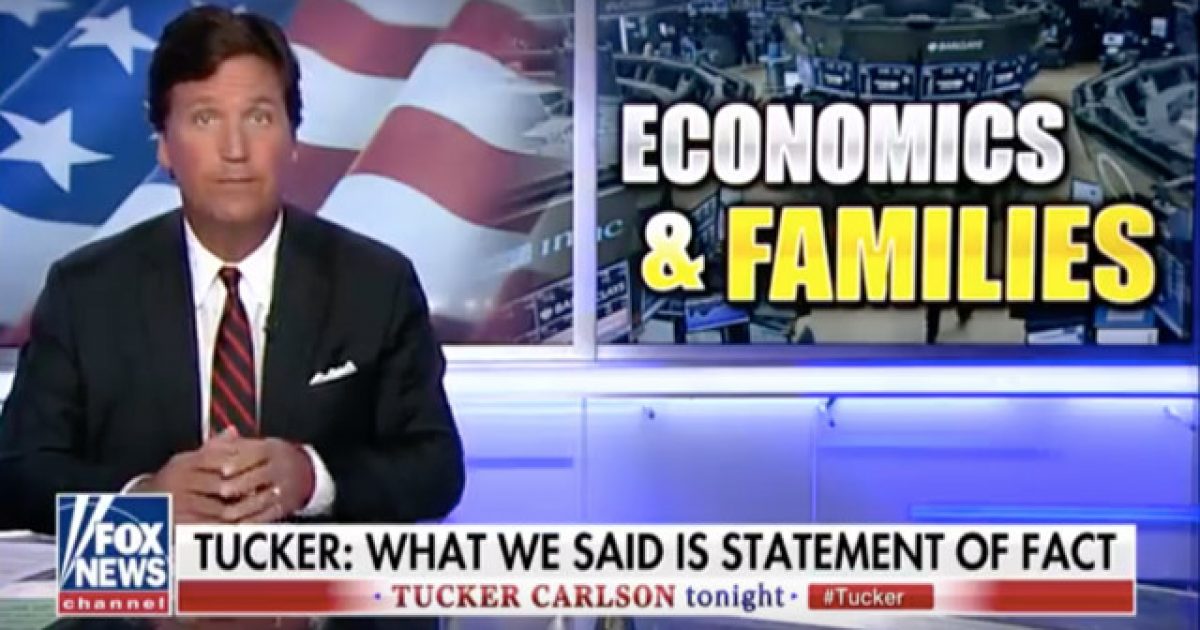 Fox News host Tucker Carlson took some time on his program Thursday night to do a little fact-checking on some left-wing outrage spewed by “The View” over some comments he recently made about the decline of income opportunities for men and the role that plays in the decline of marriage and middle class families.

As we all know, facts are like kryptonite to the radical schmoes who host shows like “The View,” so there’s no doubt Tucker taking them to the woodshed is about to make their heads pop.

In a lengthy monologue on Thursday night’s edition of “Tucker Carlson Tonight,” the Fox News host played some of the criticism “The View” co-host Joy Behar and others made of his Wednesday statement, then noted how “no one contested the facts of what we said.”

“America used to be the best country in the world for families,” said Carlson before playing some of Wednesday night’s segment on the “simple economics” behind the decline of the middle class family – the fact that women “don’t want to marry” men who make less than they do, yet income opportunities for men are on the decline thanks in no small part to policies instituted by America’s elites.

“Now let’s be clear about that statement,” said the Fox News host. “First of all, it is factually true, and that’s the essential test of anything.”

Carlson cited several studies proving his point before expressing his desire that it was not the case.

“All we did was tell the truth of what happened,” he said. “Which we did because it actually matters, and that turned out to be too much for the people that believe it is their job to prevent you from knowing why your country is going down the tubes. Those people got very angry. Here is a selection.”

The selection included quotes from Thursday’s “The View.”

“It reminds me of when they blamed women for pregnancy as if he had nothing to do with it,” said Joy Behar in one clip. Another co-host called it “loony town.”

“Yeah, loony town,” said Carlson. “No one contested the facts of what we said. In fact, later in the show one of those same hosts admitted that, in fact, women do strongly prefer marrying men who make more than they do. So it’s true but it is not on the list of approved talking points so it can’t ever be said out loud. Those are the rules and anyone who violates those rules must be punished.”

The Fox News host then noted such rules as a reason America is “in the dark age we are currently living through” before listing several consequences, including the decline of art, comedy, and original thought.

“A mob of angry children is suddenly in charge of the country,” he said. “These aren’t people seeking a revolution. They’re fighting for the status quo to protect their own status. They are drunk on power and they are looking for new people to hurt. Someday, we are going to look back on this moment with shame and horror.”

Liberalism in general has caused a massive decline in the traditional values that once sustained our nation and inspired its innovation, the same set of beliefs the left say are stifling, old-fashioned, and outdated.

It’s sad that in this supposed modern, “civilized” age, we cannot respect differences of thought and sit down to have healthy debates on important topics, going head-to-head on the battlefield of ideas rather than attacking one another on social media.

Here’s a final bit of truth.

When radical feminism is left unchecked, and subversion of “old-fashioned” gender roles occurs, it typically leaves a path of destruction in its wake. Whole societies fall because of this sort of thinking, and if we aren’t careful, America will be next on the list.