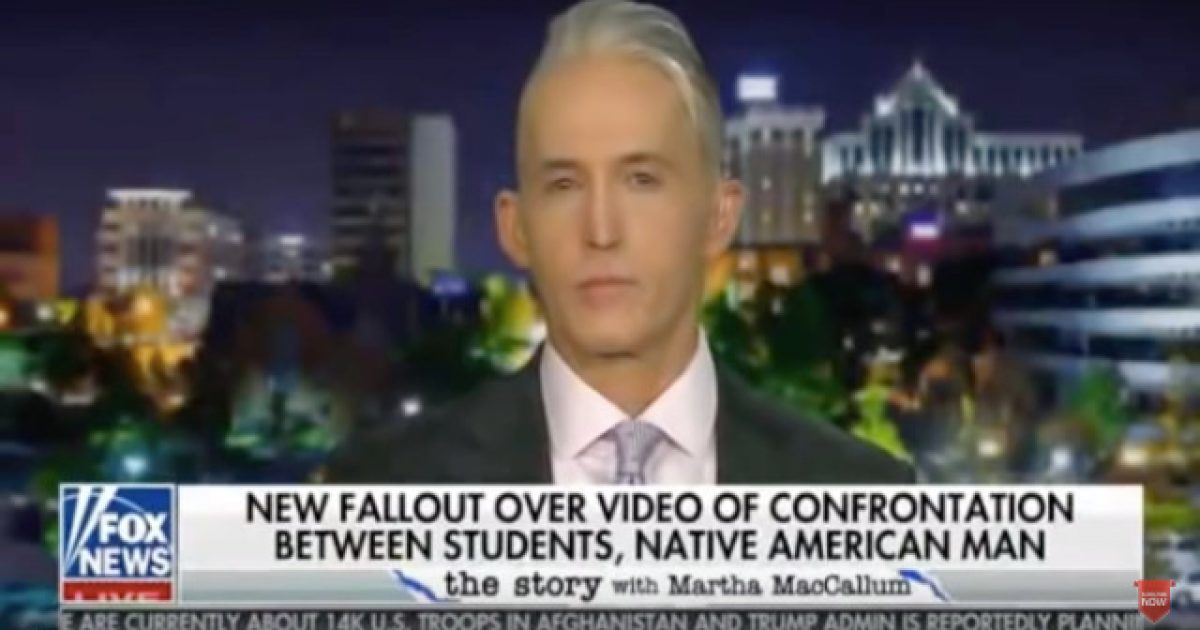 Former Rep. Trey Gowdy of the great state of South Carolina recently made an appearance on “The Story with Martha MacCallum,” where he weighed in on the whole viral MAGA hat controversy, slamming the media for taking something silly and ridiculous and turning it into a much bigger deal than it needed to be.

Gowdy went on to say that the media coverage surrounding the confrontation between Covington Catholic High School students and a less-than-honest Native American activist is a “sad reflection on where we are politically and media-wise.”

“Take time to get to know someone before you assign motives,” he said. “I see what happens when the media decides to make something viral.”

Gowdy said that the public discourse has devolved into one side always opposing another, and that it takes away from stories of “fellow citizens being kind and considerate to one another.”

Martha MacCallum asked Gowdy about the teen seen in the video of the situation being criticized, sometimes in a racially charged way, because he was wearing a hat associated with President Trump.

Gowdy said that he is “stunned that folks can look into other people’s hearts” in that regard.

Gowdy speaks a lot of truth here, especially about the need for the media to tone down their divisive rhetoric, but unfortunately, this sort of “us vs. them” mentality has been around since our nation was born.

Political conversations have always been emotionally charged, as is evidenced by incidents like the Whiskey Rebellion and the back-and-forth between Federalists and Republicans in the 1790s, which led to the modern day two-party system.

That doesn’t mean we should accept this division and mean-spirited behavior, but to act like this is something new would be a bit misguided.

What we need to do is find common ground in our shared experiences as human beings, putting aside politics for a bit just to live our lives as friends and neighbors and not political adversaries.

We need to find the core principles we all can agree on and begin to chit-chat about those, building relationships with each other to help us better appreciate our differences.

Doing this will definitely help heal a little bit of the divide we’re experiencing.