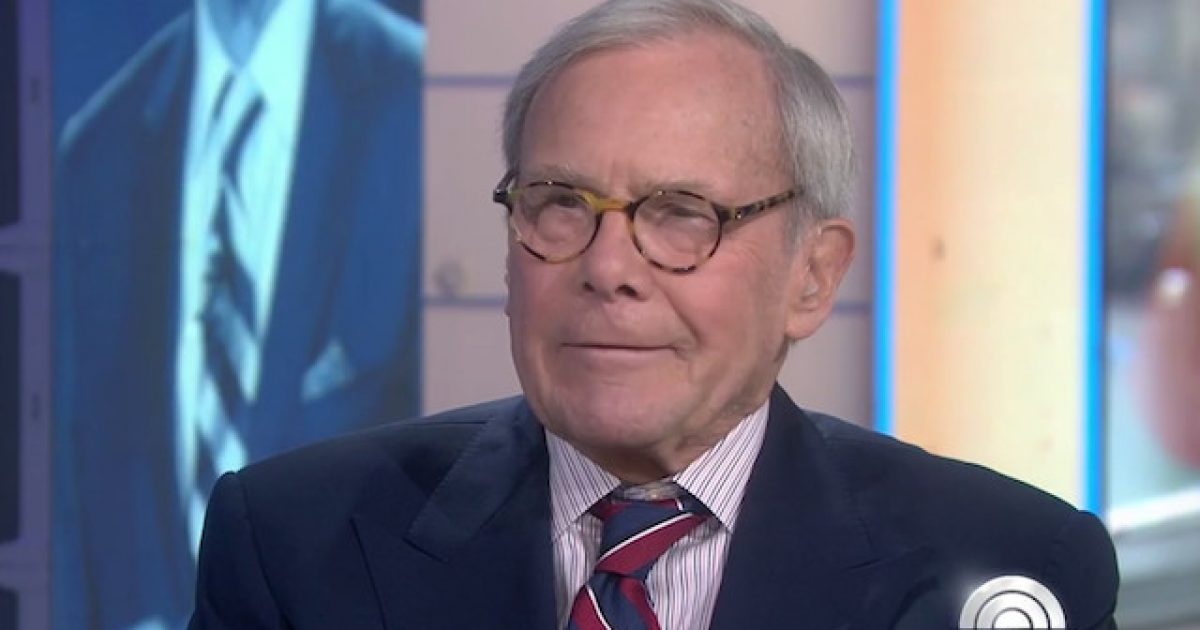 Veteran NBC broadcaster Tom Brokaw found himself at the mercy of the PC police after making a controversial statement about how Hispanics “should work harder at assimilation.”

As you can imagine, such a statement uttered in our uber sensitive culture went over like a lead balloon.

During a discussion about immigration on “Meet the Press,” Brokaw said:

A lot of this, we don’t want to talk about. But the fact is, on the Republican side, a lot of people see the rise of an extraordinary, important, new constituent in American politics: Hispanics, who will come here and all be Democrats. Also, I hear, when I push people a little harder, “Well, I don’t know whether I want brown grandbabies.”

I mean, that’s also a part of it. It’s the intermarriage that is going on and the cultures that are conflicting with each other. I also happen to believe that the Hispanics should work harder at assimilation. That’s one of the things I’ve been saying for a long time. You know, they ought not to be just codified in their communities but make sure that all their kids are learning to speak English, and that they feel comfortable in the communities. And that’s going to take outreach on both sides, frankly.

Video: @TomBrokaw warns opposition to more Hispanics in U.S. fueled by intolerant Republicans. “I hear, when I push people a little harder, ‘I don’t know whether I want brown grand babies.’” #MTP pic.twitter.com/sNJ8lxRcm3

Brokaw was raked over the coals for what many characterized as racist and “xenophobic” comments.

Rep. Joaquin Castro (D-Texas), whose brother is running for president, reacted on Twitter: “@tombrokaw, for a celebrated @NBCNews journalist who spent years chronicling American society you seem stunningly ignorant of the Hispanic community in this country. Unfortunate to see xenophobia pass for elevated political commentary.”

Hispanic journalist Julio Ricardo Varela said: “What @tombrokaw said on national TV today was hard to watch and absorb. It really was a punch in the gut to a lot of people. It was not only factually incorrect, it was also xenophobia in action. Hope @MeetThePress addresses this.”

And despite “Meet the Press” host Chuck Todd not addressing the comments on air, PBS correspondent Yamiche Alcindor, who was on the panel with Brokaw, later condemned the comments.

“I would just say that we also need to adjust what we think of as America,” she said. “You’re talking about assimilation. I grew up in Miami, where people speak Spanish, but their kids speak English. And the idea that we think Americans can only speak English, as if Spanish and other languages wasn’t always part of America, is, in some ways, troubling.”

As you might expect, however, Brokaw quickly took to Twitter to begin his self-flagellation, making apologies all around for his comments.

my twitter acct failed me at the worst time.
i am sorry, truly sorry, my comments were offensive to
many. the great enduring american tradition of diversity is to be celebrated and cherished. yamiche, thank u for your comments.
let’s go forward together.

finally, i am sorry – i never intended to disparage any segment of our rich, diverse society which defines who we are.

finally,i am sorry I failed to convey my strong belief that diversity – dynamic and inclusive is what makes America

It’s sad that we live in such a day and age where every little comment has the potential to be a live grenade on social media and ruin your career and legacy.

The statement Brokaw made isn’t untrue. Immigrants of all nationalities who want to come to this country need to assimilate. That’s just the facts. This shouldn’t be that much of a controversy.

Political correctness is stifling important things that need to be said.