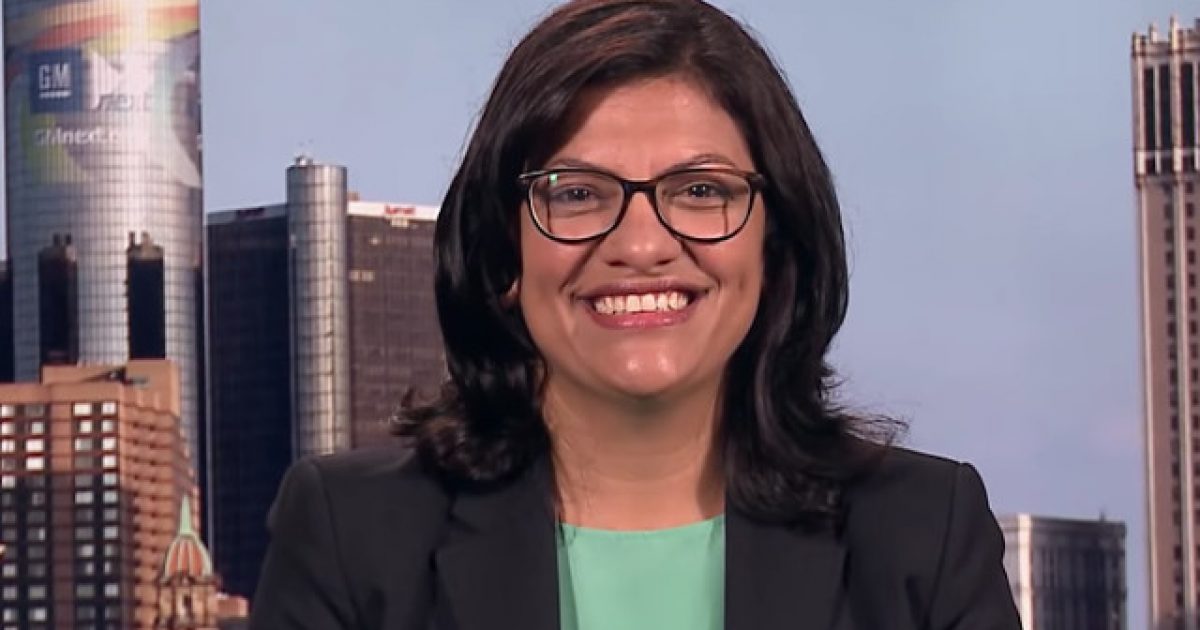 Rep. Rashida Tlaib, the delightful human being who received nationwide backlash after stating she was going to “impeach the motherf***er” in reference to President Trump, is once again in hot water.

Tlaib, the first Palestinian-American congresswoman in America’s history, is catching flack for making an egregious anti-Semitic smear, which, given her heritage and religion, isn’t all that shocking on the one hand.

Still, regardless of where you hail from, anti-Semitism is a big no-no.

While voicing her opposition to legislation combating anti-Israel boycotts, Tlaib “unleashed an anti-Semitic dual loyalty smear,” according to the Washington Examiner.

“They forgot what country they represent,” Tlaib said of lawmakers who support the pro-Israel legislation.

They forgot what country they represent. This is the U.S. where boycotting is a right & part of our historical fight for freedom & equality. Maybe a refresher on our U.S. Constitution is in order, then get back to opening up our government instead of taking our rights away. https://t.co/KkmqjR58ZM

“The idea of Jews as having divided loyalty, and of using their influence to convince others to act against the interests and principles of their own country, is an age-old anti-Semitic trope,” the Examiner’s Philip Klein explained.

Specifically, Tlaib is referring to legislation that Senate Majority Leader Mitch McConnell (R-Ky.) has said he intends to prioritize in the new congressional session. One of those bills would provide ample margin for state and local governments to curtail their business with those who actively support boycotts of Israel.

In mind, specifically, are those entities that support the BDS movement — short for Boycott, Divestment and Sanctions — a movement that advocates an international boycott of Israel until the sovereign nation acquiesces to pro-Palestine, anti-Israel policies. While the movement doesn’t admit as much, the movement seeks to erode Israel’s right to exist.

Meanwhile, Tlaib’s Democratic colleagues have taken a more nuanced posture. They say Congress should not address legislation outside of that which would re-open the government.

It seems to me that Tlaib’s career in public service is going to be incredibly short lived if she continues to behave in the unprofessional, irreverent manner she’s currently employing.

Sure, many can say the same thing about President Trump, and who knows, maybe they’re right. However, this isn’t about Trump. It’s about Tlaib.

Everyone, from the president on down, needs to be held accountable for their actions and for the things they say. To do otherwise is a misapplication of the law.