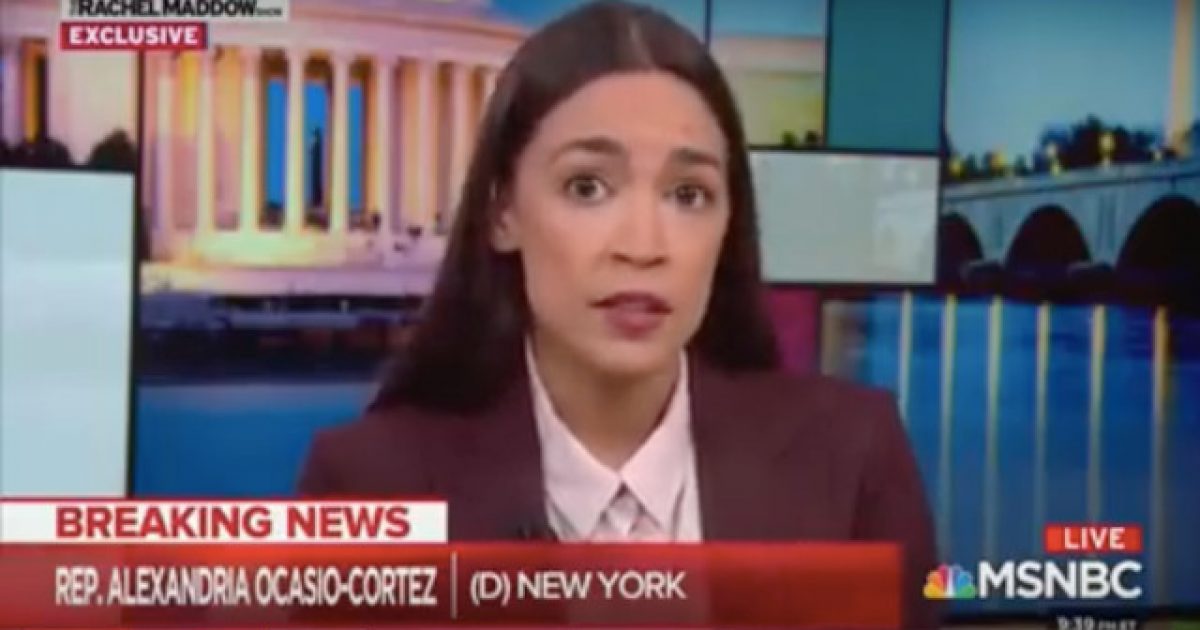 On Tuesday evening, President Trump delivered a speech discussing immigration, the need for a border wall, and the current government shutdown.

Apparently, Trump’s take on these three critical issues facing the nation left Rep. Alexandria Ocasio-Cortez a bit triggered, causing her to lose her mind on the Rachel Maddow show and make some of the wildest statements she’s made yet.

And if you’re familiar with her previous body of work, you know that’s really saying something.

Maddow began by asking Ocasio-Cortez to comment on Trump’s remarks, prompting the first of Ocasio-Cortez’s rants, as she bloviated:

I cannot tell you the amount of dysfunction that this president is advancing. We have now over 100 new members of this freshman class. I cannot even get laptops to my caseworkers in the Bronx and Queens so they can process the needs of our constituents. We cannot get their casework started because we cannot even get laptops in the hands of our district offices because the president has decided to hold the paychecks of everyday Americans hostage so that he can fulfill campaign, I don’t even want to call it a promise, a campaign fantasy that the vast majority of Americans disapprove of.

Forgetting that only two days ago she had been shown dismissing the value of facts, saying on CBS’ “60 Minutes,” “I think that there’s a lot of people more concerned about being precisely, factually, and semantically correct than about being morally right,” Ocasio-Cortez continued:

And not only that, but in the actual address, there was falsehood after falsehood and we have to make sure that we get our facts straight. Every day immigrants commit crimes at a far lower rate than everyday Americans.

Then she added this comparison:

And not only that, but the women and children on that border that are trying to seek refuge and seek opportunity in the United States of America, with nothing but the shirt on their back, are acting more American than any person who seeks to keep them out ever will be.

Maddow asked if Ocasio-Cortez was dismayed by the “untrue things President Trump has said regarding immigration.” She queried, “What’s your take on the fact that the president’s been telling these same lies for years now, and not shying away from that at all?”

Ocasio-Cortez replied by accusing President Trump of being a long-time racist:

I think it’s unsurprising because even before he was elected President of the United States, he has a proven track record of discrimination against anybody who’s really non-white in the United States. He had been sued by the Nixon administration back in the day for not renting to black Americans, he has had controversy after controversy, so this is very consistent. It’s not just the continued lies throughout his administration but frankly it’s part of a very consistent pattern of his entire life.

Ocasio-Cortez then segued to discussing the district she represents:

But I think it’s extremely important, you know I represent New York’s 14th congressional district, we are 50% immigrant. I represent the Bronx and Queens, Jackson Heights, over 200 languages are spoken in my district alone. We enjoy some of the highest rates of economic activity and the Bronx itself has had some of the highest rates of economic growth in all of New York City and that has been directly, directly correlated with our embrace of immigrants. New York City overall is an immigrant city and we enjoy a very large amount of economic and cultural prosperity as a result.

And what kind of Ocasio-Cortez rant against President Trump’s stance on immigration without a full on verbal assault of ICE?

And that includes our amazing and beautiful and productive immigrant community. And moreover, the one thing that the president has not talked about is the fact that he has systematically engaged in the violation of international human rights on our border. He has separated children from their families: he talked about what happened the day after Christmas, on the day of Christmas, a child died in ICE custody. The president should not be asking for more money to an agency that has systematically violated human rights. The president should be really defending why we are funding such an agency at all because right now what we are seeing is death, right now what we are seeing is the violation of human rights, these children and these families are being held in what are called Yeletas, which are basically freezing boxes that no person should be maintained in for any amount of time, let alone the amount of time they are being kept on, and moreover, even if you are anti-immigrant, in this country, the majority of immigrant overstays, the majority of the reason that people are undocumented is visa overstay. It’s not because people are crossing a border illegally. It is because of visa overstay which mind you, he’s talking about legal immigration — he’s trying to restrict every form of legal immigration there is in the United States.

What makes Ocasio-Cortez so darn dangerous is the fact that she’s adopted a twisted, degenerate political ideology, having been spoon fed this junk in college, without thinking critically through her own worldview.

She’s essentially ignorant about the facts on many major issues, yet spews leftist talking points like crazy, not having any real clue how the policies she’s pushing would impact regular American citizens.