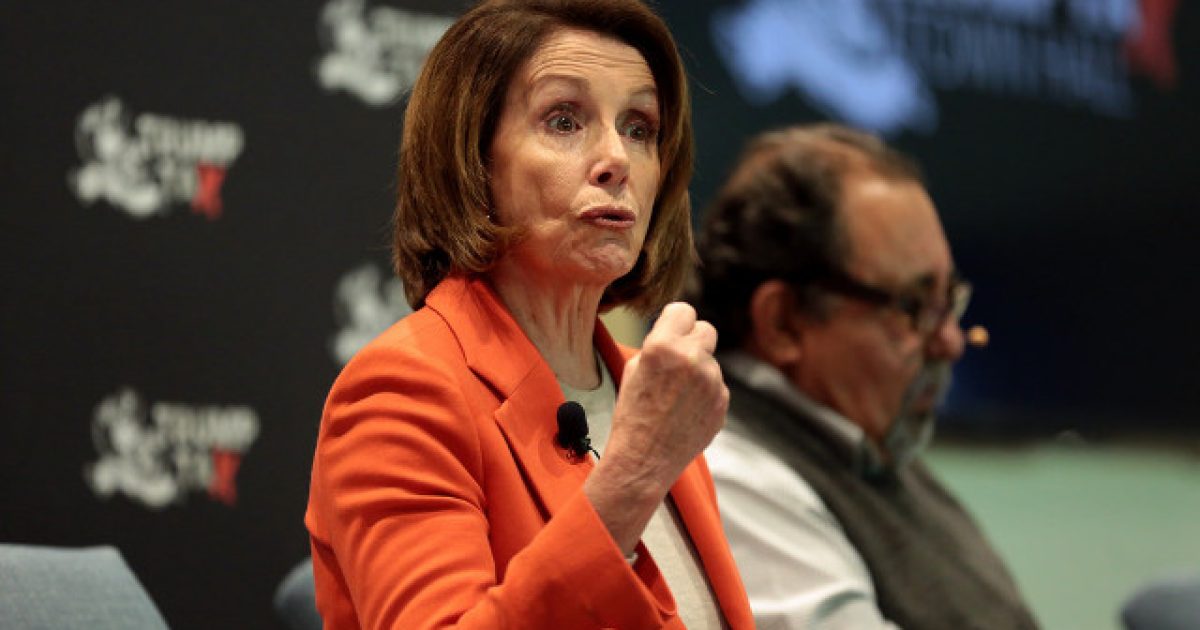 Judicial Watch, a conservative watch dog group, has obtained a series of documents that reveals how much cash flow Speaker of the House Nancy Pelosi spent on trips flying around the world — similar to the one cancelled by Trump last week — and boy, oh boy is it an astounding number.

Hold on to your butts because this is seriously going to knock you for a loop. This is where your tax dollars are going.

The Daily Caller reports that Pelosi’s CoDel trip, that was canceled at the last minute by President Donald Trump in response to the the Speaker of the House accusing the White House of abusing scarce resources by holding the State of the Union address in the midst of a government shutdown, was hardly her first trip abroad on the American dime.

A Judicial Watch Freedom of Information Act request seeking information about Pelosi’s previous CoDel trips turned up a jaunt Pelosi took in 2015 to Italy and the Ukraine aboard Air Force planes. The total cost of the trip: $184,587.81.

The Washington Post reported on the trip at the time, seeking information specifically as to why Pelosi made a stopover in Italy part of the Congressional delegation’s visit to the Ukraine which, at the time, was in the midst of a national crisis. Pelosi’s trip took place in August, just a few short months after the Crimean crisis, just as the country was recovering from riots, a major revolution, and a standoff with Russian forces.

The explanation might be simple: Pelosi wanted to treat at least four members of her family to a lovely vacation. From the Caller:

Four family members, including Pelosi’s husband Paul Pelosi, were slated to go on the trip. The delegation was scheduled to dine at restaurants including James Beard American Restaurant in Milan, where a five-course meal cost up to $190, according to Fine Dining Lovers. The lawmakers also toured the Vatican and met up with Italian dignitaries, including President Sergio Mattarella and then-Prime Minister Matteo Renzi, according to their itinerary.

So how, exactly, did Pelosi justify this exorbitant trip? By claiming that it was “intended to underscore the U.S. commitment to security in that region.”

Yeah, that doesn’t smell like a load of horse manure, right?

In fact, Judicial Watch says, Nancy Pelosi has made a habit of spending more on travel than her colleagues. Although they don’t have concrete numbers, Judicial Watch estimates that Pelosi may have cost taxpayers as much as $2,100,744.59 over a single, two-year period, including a whopping $101,429.14 for “in-flight conveniences, such as food and alcohol.”

Judicial Watch also revealed in 2011 that Pelosi frequently used Air Force planes to travel between Washington, D.C., and her home district of San Francisco, California, even though commercial flights from DC to SFO airport are widely available.

So let’s get this straight here. Nancy Pelosi, a raging leftist who is all about pushing an anti-American, anti-liberty agenda, is not only working to strip us of our rights, she’s taking money from taxpayers — which pay her salary — and using it to take fancy vacations?

This is modern day liberal politics, folks. Take your freedom, take your money, pocket the difference and enjoy the perks. It’s absolutely disgusting.