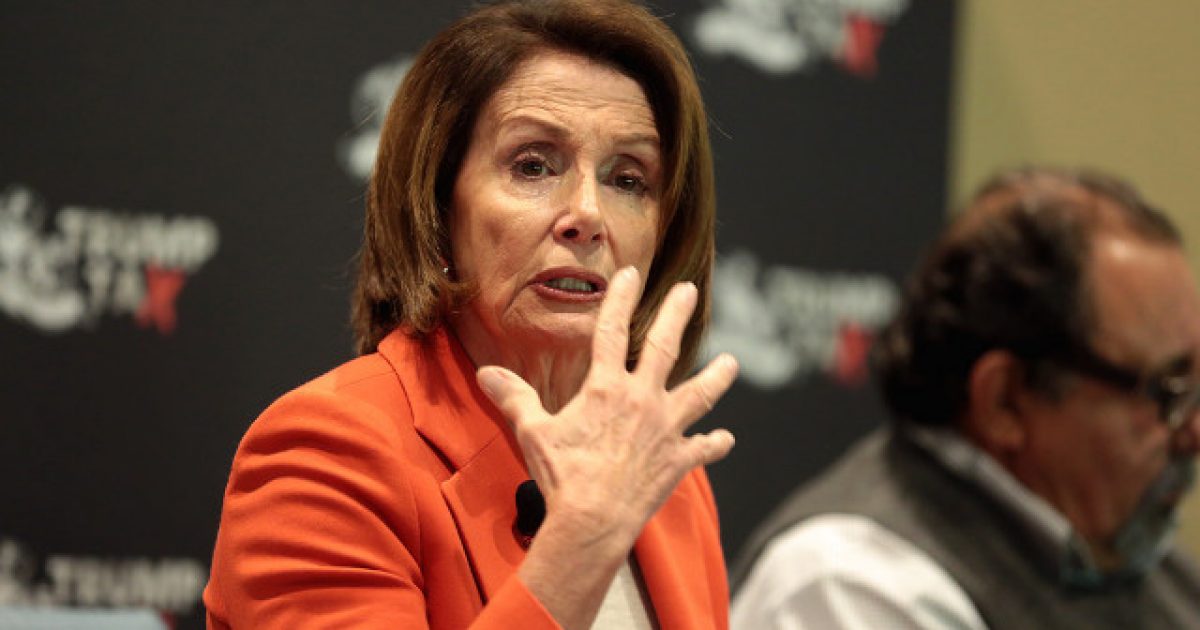 It seems that in today’s highly charged political climate, where even the smallest disagreement over ideals and philosophy can result in explosive rhetoric, there is a fundamental disagreement over the word “facts.”

Both the GOP and the Democratic Party say they have the facts, but seeing as how they’re coming to opposite conclusions, someone has to be wrong. There’s no such thing as “alternative facts” after all.

Yet that didn’t stop Speaker of the House Nancy Pelosi from blabbering her own “alternative facts” claim. Not surprisingly, the media was silent on this.

In a tense meeting with Homeland Security Secretary Kirstjen Nielsen about the U.S.-Mexico border — in which Nielsen was spieling out a slew of facts (the non-fungible kind) — Pelosi interrupted to declare: “I reject your facts.”

“The clash between the top House Democrat and a key member of President Trump’s Cabinet occurred during a Wednesday meeting in the White House amid the impasse over the government shutdown, with Trump standing firm and demanding $5 billion for the border wall,” Fox News reported.

At one point during the meeting, according to the Wall Street Journal, Pelosi interrupted Nielsen, who was citing statistics related to the border, including how many criminal illegal immigrants attempted to enter the U.S. last year.

“These aren’t my facts,” Nielsen shot back. “These are the facts.”

“I am disappointed that Dems did not want to hear from @DHSgov about the security & humanitarian crisis we are facing at the border,” Nielsen wrote. “They didn’t want to hear about criminal aliens, drug smugglers, smuggled & abused children or violent caravans trying to breach the border wall.”

I am disappointed that Dems did not want to hear from @DHSgov about the security & humanitarian crisis we are facing at the border. They didn’t want to hear about criminal aliens, drug smugglers, smuggled & abused children or violent caravans trying to breach the border wall.

“It was preposterous,” Durbin said. “At a time when we have the lowest level of apprehensions at the border — stopping people from coming in illegally — the lowest level historically, she is saying that we have all these terrorists and criminals and all these people on their way in.”

But Nielsen got rolling:

The crisis is not going away-it is getting worse. The status quo in funding & authorities for #DHS is irresponsible & makes our country less secure. Kicking the can down the road is not the answer. I look forward to engaging w Members who want to listen & be part of the solution.

The left in this country is desperate to avoid issues with tangible, provable facts like this that explode the narrative they use to build their platforms off the back of minorities. Like the individuals who cross into America at the southern border for example.

They rely heavily on these demographics to win elections, therefore, anything that might jeopardize that requires them to bury their head in the sand.

Pelosi can “reject” the facts all day long and refuse to believe them. That’s her choice. However, truth is truth, fact is fact. These facts will remain facts whether or not Pelosi accepts them. Her ignoring the truth only works in favor of conservatives.

Too bad she hasn’t caught on to that yet.