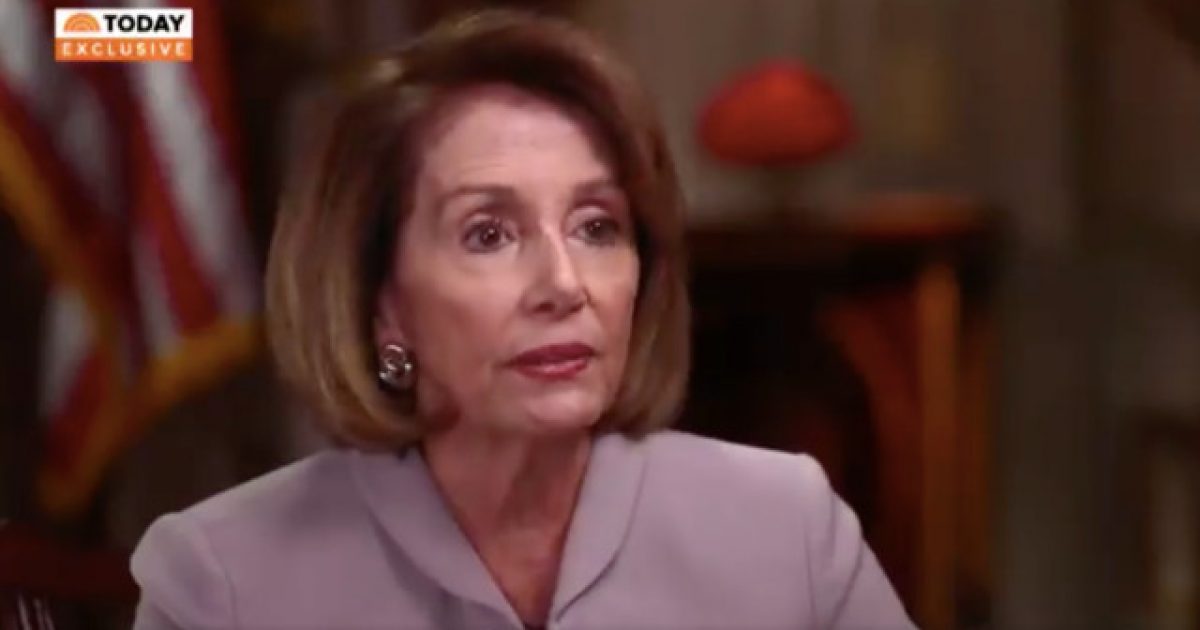 Rep. Nancy Pelosi, who is likely the incoming Speaker of the House, was grilled by the media about whether or not a sitting President could be indicted.

The answer she gave is a rambling mess that is only causing more confusion on the topic. In other words, it’s typical Pelosi.

At first, Pelosi seemed to understand the question. Guthrie asked, “Do you believe the special counsel should honor and Pelosi responded, “I do not think that is conclusive. No, I do not.”

Guthrie, determined to get Pelosi on the record that President trump could be indicted, followed by querying, “Do you think it’s possible that Special Counsel Mueller could, legally, indict a sitting president?”

Pelosi evaded, “Let’s just see what Mueller does. Let’s spend our time on getting results for the American people.”

Guthrie, still on the prowl, “As you well know, there is long-standing Department of Justice guidance that states a sitting president should not be indicted, but it is not the law.”

Pelosi, showing she didn’t understand what a “sitting president” was: “I don’t agree with that. That’s not the law. Everything indicates that a president can be indicted after he is no longer president of the United States.”

Guthrie, attempting to clarify the issue for Pelosi: “What about a sitting president?”

Pelosi, completely in the dark: “Well, a sitting president, when he’s no longer president of the United States—“

Guthrie, getting exasperated: “A president who is in office: could Robert Mueller come back and say, ‘I am seeking an indictment?’”observe the Department of Justice guidance that states a sitting president cannot be indicted?”

One thing’s for sure. Nancy Pelosi is one of the most incompetent individuals serving in our current Congress and this little exchange is the proof.

The fact this is what Democrats and the mainstream media are spending their time on speaks volumes.

Just imagine if they used this same effort and energy on working with Republicans instead of against them? Our nation would be in much better shape.

NEWS: Pelosi says it is possible to indict the president while still in office. Breaking on @TODAYshow pic.twitter.com/743FRPuMZj