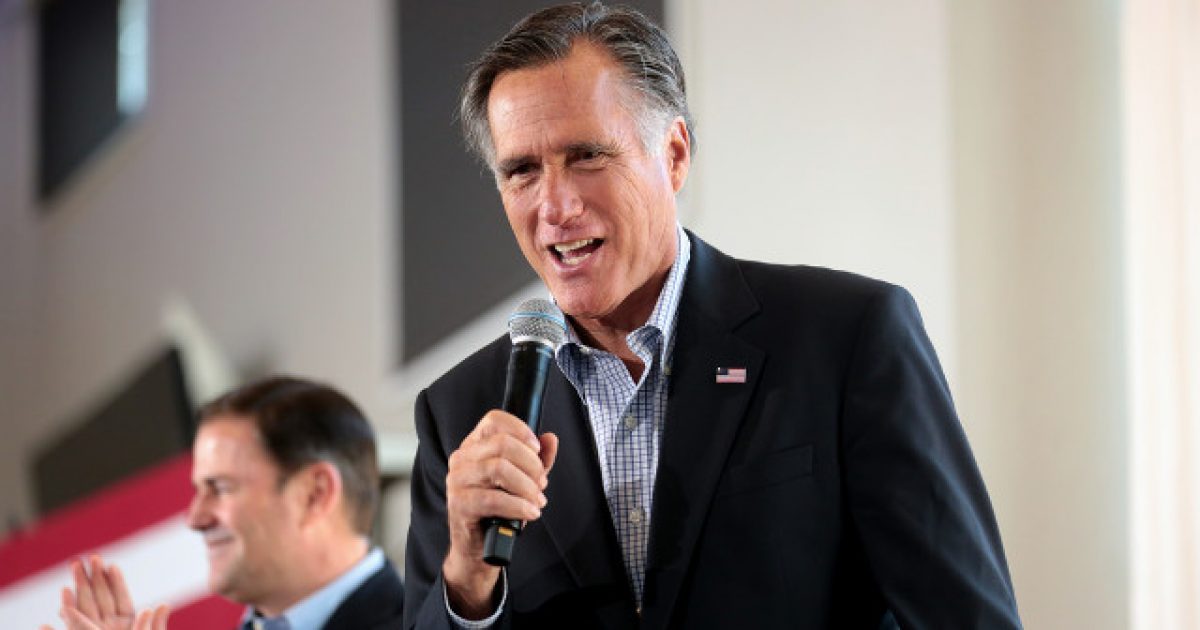 It seems pretty safe to say that Mitt Romney is not at all a big fan of President Trump. Now, to be fair, this is something we kind of already knew, as Romney has not at all been shy when it comes to sharing his feelings on the president.

However, a new op-ed from Senator-elect Romney is much more brutal and scathing in tone than any other criticism we’ve heard from him thus far. Romney must be a glutton for punishment because there’s no doubt Trump is going to throw down the gauntlet against him, and it’s going to be very, very bad.

In an op-ed for the Washington Post, Romney wrote Trump’s “conduct over the past two years, particularly his actions this month, is evidence that the president has not risen to the mantle of the office.”

It’s not that Trump’s policies are bad, Romney explained, but rather it’s his character.

To a great degree, a presidency shapes the public character of the nation. A president should unite us and inspire us to follow “our better angels.” A president should demonstrate the essential qualities of honesty and integrity, and elevate the national discourse with comity and mutual respect. As a nation, we have been blessed with presidents who have called on the greatness of the American spirit. With the nation so divided, resentful and angry, presidential leadership in qualities of character is indispensable. And it is in this province where the incumbent’s shortfall has been most glaring.
To compound the problem, Romney said, is the fact the world is looking to America for leadership on various issues, a responsibility Romney believes Trump has failed to take seriously.

“Trump’s words and actions have caused dismay around the world,” Romney wrote. “In a 2016 Pew Research Center poll, 84 percent of people in Germany, Britain, France, Canada and Sweden believed the American president would ‘do the right thing in world affairs.’ One year later, that number had fallen to 16 percent.”

Later in the op-ed, Romney declared the “world needs American leadership.” But “to reassume our leadership in world politics, we must repair failings in our politics at home.”

Romney later went on to state that he’s not going to be yet another pebble in the shoe of the Trump administration, opposing policies just for sheer spite. He said that he would back policies that he believes are in the best interest of the country and oppose those he thinks aren’t.

He also said that he’s not going to comment on every tweet or fault of Trump’s, but fully plans on giving resistance when it comes to statements or actions that are “divisive, racist, sexist, anti-immigrant, dishonest or destructive to democratic institutions.”

Here’s what Trump had to say in response:

Here we go with Mitt Romney, but so fast! Question will be, is he a Flake? I hope not. Would much prefer that Mitt focus on Border Security and so many other things where he can be helpful. I won big, and he didn’t. He should be happy for all Republicans. Be a TEAM player & WIN!

Now, if we’re honest, it’s safe to say that most folks can plainly state that while Trump is doing a pretty good job with many of his policies, the fact remains that his moral character and integrity are fairly questionable.

That is a statement that will make many fans and supporters of his very angry, but it’s the truth, like it or not. However, the American people weren’t that concerned about personal moral character — right or wrong — when it came to voting for Trump.

What mattered was having someone who was at least a little bit conservative who could keep Hillary Clinton at bay. And that’s precisely what Trump accomplished. He’s never pretended to be anything other than what he is, and while there’s plenty to disagree with personally, his brutal honesty and obvious love for America are fine qualities for a president to possess.

Nobody is perfect. Anyone of us could face the judgment of God at any time, a fact many tend to forget, but is a reality that should color our behavior and judgment.

Let’s hope Trump continues to grow as a person and that Mitt would stop trying to pick a fight he can’t, nor needs, to win.